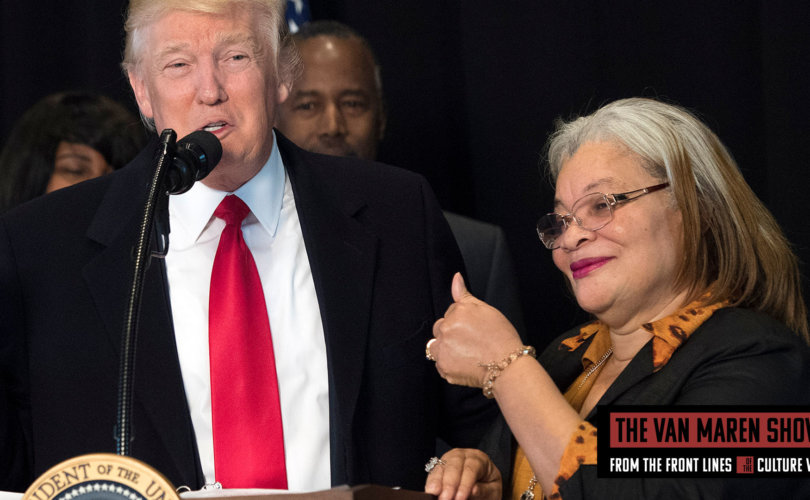 September 23, 2020 (LifeSiteNews) — During an appearance on The Jonathon Van Maren Show where she explained how she went from being a “pro-choice” Democrat to a pro-life Christian, Dr. Alveda King said that she believes that African-Americans are “waking up” to the extremism in the Democratic Party and that they support President Trump for his pro-life and pro-jobs agenda.

“People are waking up — not just African-Americans. Americans are waking up. The Democratic Party is not the party that it used to be.”

“Many African-Americans followed Daddy King out of the Republican Party and into the Democrat Party,” she said.

Alveda King herself was a longtime Democrat. She revealed to Jonathon Van Maren that as a youth, she attended civil rights marches and was “pro-choice” while serving in the Georgia House of Representatives from 1979 until 1983. She then explained why her views changed.

“I became pro-life in 1983 when I became a born-again Christian. At that time, I was pro-choice. I was a Democrat…my worldview was much more secular. I became born-again in ’83. I acknowledgde at that time all of my sins — I had had two abortions and a miscarriage because of damage done to my body by the abortions.”

King also told Van Maren that her own mother wanted to have her aborted in 1950 but that abortion was illegal. Her grandfather, Dr. Martin Luther King, Sr., told King’s mother that she was not going to abort her.

“Daddy King was a champion against abortion and for life all of his life. He did that in our own family. He did that for our church members in the mid-’70s,” she said.

King proceeded to explain how she eventually met Fr. Frank Pavone in the 1990s and how she became more involved in his group Priests for Life. She also discussed President Trump, the current U.S. Supreme Court opening, and how some of the other figures in the civil rights movement moved away from being pro-life.

To receive weekly emails when a new episode of the Van Maren Show is uploaded, subscribe below: