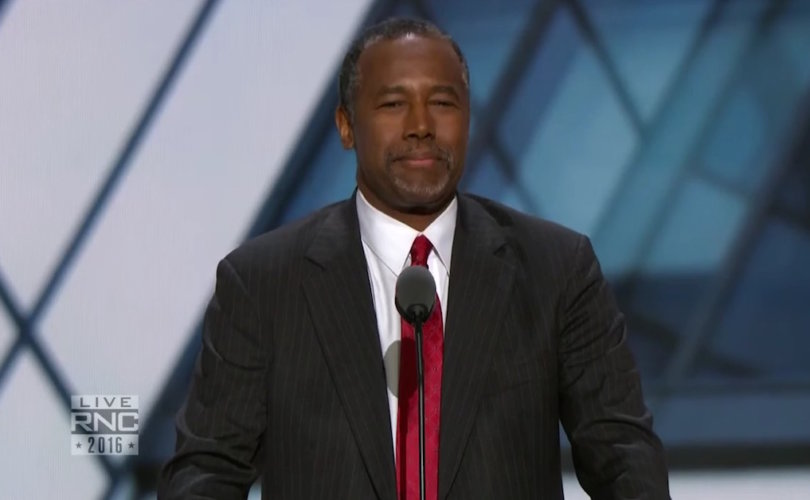 CLEVELAND, July 20, 2016 (LifeSiteNews) – Former presidential candidate Dr. Ben Carson stood by his comments linking Hillary Clinton to Lucifer this morning, adding that the policies she espouses – like abortion-on-demand and changing the definition of marriage – are “evil.”

At a separate event, he called redefining sex based on one’s preferred gender identity “the height of absurdity.”

In his nationally televised address to the Republican National Convention last night, Dr. Carson alluded to the fact that Hillary Clinton had looked up to Saul Alinky, the godfather of left-wing community organizers.

Alinsky dedicated his best-known book, Rules for Radicals, to “Lucifer.”

On CNN this morning, Carson told Christopher Cuomo the book advised protesters to unleash “controlled anarchy in order to change us from a democratic republic to a socialist society,” a philosophy that is not “consistent with the principles” of the United States.

Clinton wrote her senior thesis at Wellesley College on Alinsky, with whom she maintained a friendly correspondence, in 1969.

Cuomo repeatedly asked Dr. Carson if he had gone “too far” in mentioning Clinton and Lucifer in the same breath, adding that he had never heard Clinton “mention” Alinsky as a mentor in public.

“She was on a first-name basis with Saul Alinsky,” Dr. Carson replied. “He offered her a job.”

“You have to also use your brain,” Carson said. “Look at her actions, you look at what she advocates. The killing of babies, the dissolution of the traditional family” are “pretty consistent” with Alinsky’s socialist worldview.

But they contrast markedly with her professed Christian faith, he said.

Clinton “doesn’t have the knowledge or the judgment” to be president, he concluded.

In addition to his floor speech, the neurosurgeon has come under fire today for a separate address to the Florida delegation at the Republican National Convention, in which he said changing one’s gender is as absurd as attempting to change ethnicity.

“For thousands of years, mankind has known what a man is and what a woman is, and now, all of a sudden we don’t know anymore,” he told delegates on Tuesday morning. “Now, is that the height of absurdity?”

“Secular progressives” had tried to present the transgender political movement as part of the civil rights crusade, but “it's not a civil rights issue,” he said.

Polls have shown a majority of African-Americans reject equating LGBT concerns with the civil rights movement.

Identifying with another gender “doesn’t change their genetics,” he said. “A leopard can’t change its spots,” he added, quoting the Book of Jeremiah.

“Nobody gets to redefine everything for everybody else and then make them comply to it,” he said. “That’s not tolerance.”

Carson: During this debate ‘200 babies have been killed by abortionists.’ We can change that

Ben Carson: ‘It is not fair’ for transgender men to use women’s restrooms (video)