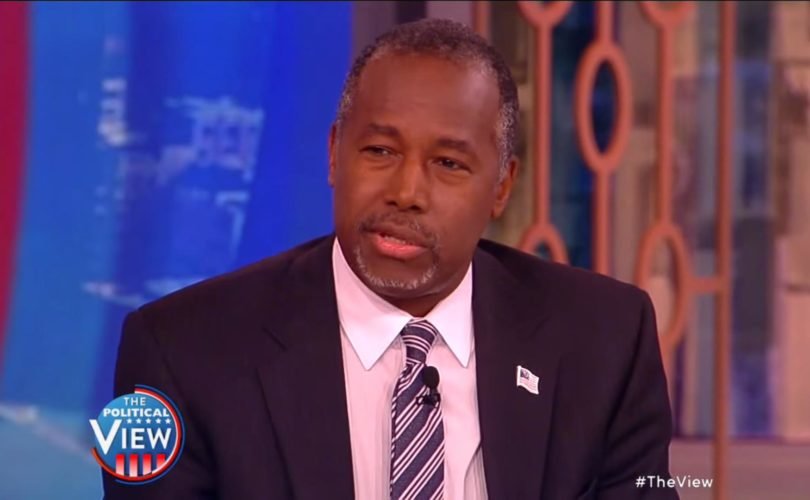 WASHINGTON, D.C., October 26, 2015 (LifeSiteNews) — Dr. Ben Carson believes that a baby conceived by rape or incest does not deserve to be put to death.

In an interview on Sunday on Meet the Press, Carson said, “I would not be in favor of killing a baby because the baby came about in that way.”

“All you have to do is go and look up the many stories of people who have led very useful lives who were the result of rape or incest,” he added.

Dr. Carson, who is currently leading the Republican presidential field in Iowa according to a new Monmouth poll, previously weighed in on the issue of exceptions for rape on August 12. He told Fox News host Neil Cavuto that he favors giving the abortifacient RU-486 to rape victims. Carson said that he believed this would prevent ovulation, but RU-486 – and all forms of so-called “emergency contraception” – can prevent the implantation of a newly conceived child.

Rape and incest each account for approximately one percent of all abortions in the United States, according to the Guttmacher Institute, formerly a research arm of Planned Parenthood.

During the 20-minute interview, Dr. Carson told NBC's Chuck Todd that he “would love to see” Roe v. Wade, the 1973 landmark Supreme Court case defining abortion-on-demand until viability a constitutional right, overturned and likened the institution to slavery.

“During slavery, a lot of the slave owners thought that they had the right to do whatever they wanted to that slave,” he said. “What if the abolitionist had said, you know, 'I don't believe in slavery. I think it's wrong. But you guys do whatever you want to do'? Where would we be?”

Comparins abortion to slavery and the Nazi eugenics program has resulted in blowback from some in the liberal blogosphere, who accuse the doctor of minimizing the harmful aspects of those atrocities. But Carson said he hasn't experienced any of that.

“In the last several weeks, I’ve heard from many people in the Jewish community, including rabbis, who said, ‘You’re spot on. You are exactly right,’” Carson said.

Only reporters, like Todd, “try to stir things up,” he said. But it resonates only “for people who aren't really thinking deeply.”

When Todd asked about exceptions for the “life and health of the mother,” Dr. Carson responded that represented “an extraordinarily rare situation. But if in that very rare situation it occurred, I believe there's room to discuss that.”

While abortions to save the life of the mother represent a small percentage of abortions nationwide, politicians expanded that exception to include the “health of the mother” – an exception that pro-life observers warn is broad enough to cover any condition, mental or physical, real or imagined.

The neurosurgeon said he did not inflexibly oppose abortion in all circumstances.

“I'm a reasonable person, and if people can come up with a reasonable explanation of why they would like to kill a baby, I'll listen,” he said.

I was violently raped at 16. But the abortion was so much worse.

I miscarried after being raped at 13 – the truth is, I long for that child