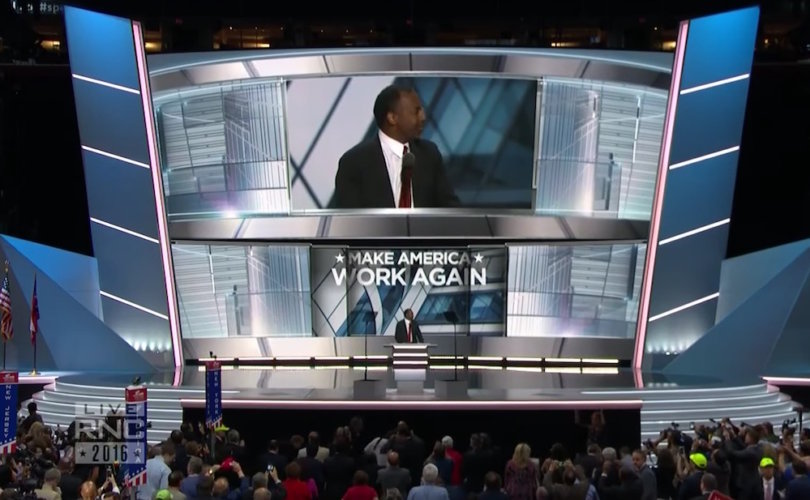 “One of the things that I have learned about Hillary Clinton is that one of her heroes, her mentors, was Saul Alinsky,” a socialist who honed the art of street protest in his 1971 book, Rules for Radicals.

“On the dedication page, it acknowledges Lucifer, the original radical who gained his own kingdom,” Dr. Carson said, closely paraphrasing Alinsky.

Alinsky felt compelled to acknowledge “the very first radical” who “rebelled against the establishment and did it so effectively that he at least won his own kingdom – Lucifer.”

That is incompatible with a nation that prints “In God We Trust” on its currency, he said.

“Are we willing to elect someone as president who has as their role model somebody who acknowledges Lucifer?” he asked.

Dr. Carson defended his remarks on CNN this morning, saying that socialism violates the Constitution and Hillary Clinton’s advocacy of abortion and redefining marriage are “evil.”

Dr. Carson invoked the importance of the Supreme Court in the upcoming presidential election. Clinton “would appoint Supreme Court justices, she would appoint federal judges, and that would have a deleterious effect on what happens for generations to come,” he said.

Both Clinton and her husband have mentioned the composition of the Supreme Court as a reason to elect a Democrat president in 2016. In addition to the late Antonin Scalia, the next president is likely to appoint a successor to Ruth Bader Ginsburg, appointed by Bill Clinton in 1993, and possibly others.

Dr. Carson asked voters not “to passively accept what is fed to us by the political elite and the media,” both of which “have an agenda.”

He warned delegates to “be wary of the narrative that’s being advanced by some in our own party, the notion that a Hillary Clinton administration wouldn’t be that bad, that the effects would only be temporary.”

Jeb Bush also wrote in a Washington Post op-ed that he would “support the Libertarian ticket” – former Governor Gary Johnson, who supports abortion-on-demand and opposes conscience rights – “or write in a candidate.”

For the second time in two days, protesters with the radical left-wing group Code Pink disrupted the Republican National Convention, this time as Dr. Carson concluded his speech. A white protester shouted down the African-American doctor as she held a sign saying, “No Racism, No Hate.”

The speech came hours after Donald Trump formally sealed his status as the Republican presidential nominee on the floor, beating back a last-ditch effort by “Never Trump” delegates to allow delegates to vote against the candidate favored by their state’s voters. Delegates believed they had the votes to be allowed to vote for the candidate of their conscience, rather than being “bound” to support the candidate supported by voters. The chairman announced that the measure failed on a voice vote, which the Never Trump delegates were largely believed to have won.

On the floor, Dr. Carson won seven votes for president, behind Senator Ted Cruz, Sen. Marco Rubio and Gov. John Kasich but ahead of Bush and Sen. Rand Paul.

Donald Trump Jr. gave the final votes that put his father over the top, flanked by his family members and Carl Paladino. Trump Jr. then gave a well-received speech to the RNC in prime time. His sister, Tiffany Trump, also gave an address mentioning the billionaire’s familial devotion, including the notes he would write on her report cards.