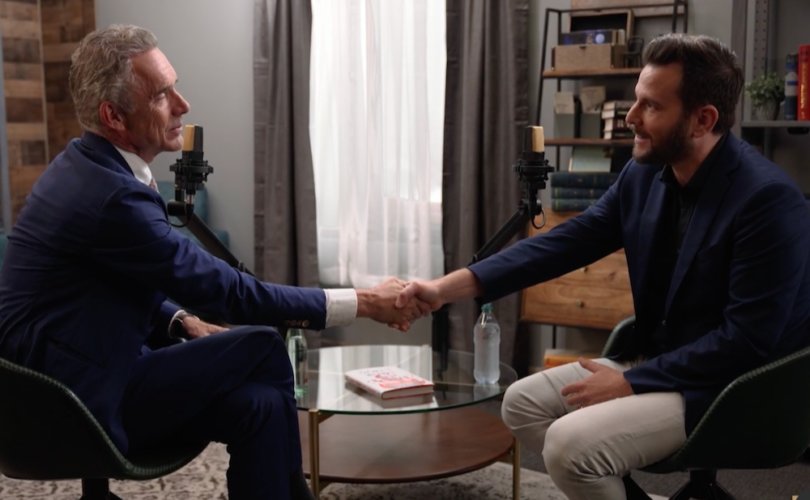 Just seven years and one week since the U.S. released its decision in the Obergefell same-sex ‘marriage’ case, the impulse among high profile conservative thinkers and opinionators is not to preserve the immutable definition of marriage, but to justify mutilating it to include two men or two women as “married.”

“This is a political issue. We’re trying to sketch out a pathway … I mean, our culture appears to have decided that gay marriage has become part of the structure of marriage itself,” Peterson stated at the outset of the hour and a half discussion, waving an enormous white flag of surrender.

Paraphrasing Peterson, Rubin said that “for most people, to live a fully actualized life, being a parent is an integral part of that. There are almost no exceptions to that.”

Peterson and Rubin indicted themselves out of the starting gate with that statement because they ignore that, for a child to have a fully actualized life, having both a mom and a dad is an integral part of being a son or daughter.

Peterson casually tossed the definition of marriage into the dustbin of history, claiming that “Marriage is the union of two people,” not the union of a man and a woman. He nonchalantly trashed civilization’s understanding of nature and biology and the understanding of every society and religion around the world for thousands of years.

Why? Because after working closely with ‘homosexual-married’ Rubin for several years, Peterson has allowed Rubin to insinuate himself into Peterson’s life and alter his normally sound thinking.  Gaycons (gay conservatives) Douglas Murray, Peter Thiel, and others have done something similar, leading conservative elites to embrace and promote what was unimaginable even a few years ago.

We now have a class of cowardly, unserious, easily-swayed academics, thinkers, and opinionators blithely sacrificing children and the meaning of marriage on the twin altars of the sexual revolution and political correctness.

Calling out wokeness while surrendering to it

Rubin and Peterson have attained fame by calling out the worst of wokeness, yet here they are loudly and publicly surrendering to it.

Let’s face it: Peterson and Rubin have made it clear that they are A-OK with men treating women as breeders, not as human beings who are integral to men’s lives.

Gays who seek children to adorn their lives choose to abandon women completely when it comes to the one, central biological truth that requires a wonderful level of intimacy: conception. The two sexes become one, literally forming a single life-producing organism.

Instead, gays have found ways through medical science to declare themselves independent of the sex that unnerves them so. Women are objects of scorn and ridicule, not love or relationships.

Peterson speaks of the necessity of three components—job/career, intimate relationships, and parenting—in order to attain “full actualization.”  But here, sitting in front of Dave Rubin, he promotes the adolescent fantasy of a male “marrying” another male, abdicating manhood.

The post-Obergefell world in which we now live, where culture-changing new rights and laws have been pulled from the penumbra surrounding the Constitution, demands that we all also now live our lives within a penumbra-like world of twilight and shadow. As such, Peterson and Rubin have both been lulled, enticed into that shadowland.

Entering a ‘new world’ where Rubin is ‘conservatives’ greatest hero’?

“We seem to be entering a new world right now. We’re watching an old world go away and we’re entering this new world,” announced Rubin. “I’m part of this new conservative world.”

What can be said to “the conservatives that were worried that this is where we were going to end up?  In some sense, I should probably be their greatest hero,” asserted Rubin, “because ‘Oh, here’s someone who wanted to enter civilized society, wanted to affirm most of the long-fought, time-tested ideals, wanted to help defend that world” (italics added for emphasis).

Rubin admits that he is willing to fight for timeless principles—except for those that directly confront his own life.

The Peterson/Rubin discussion repeats the dynamic of last fall’s Nat Con 2 conference, where conservatives and GayCons found common ground in their abhorrence of transgenderism, especially woke society’s mutilation of the bodies and psyches of vulnerable children and adolescents.

Perhaps ironically, during their interchange, Peterson and Rubin ostensibly mutilated marriage and felt pretty good about it—superior, in fact—to those who aren’t enlightened enough to see things their way.

Conservatism is founded upon timeless principles. “Movement conservatism means ideas tethered to the permanent things, eternal principles that are 100 times more important than any political party or its fortunes in any election cycle,” said Roberts.  It recognizes “the existence of an enduring moral order that all of us have imprinted on our souls, or you know, for our atheist friends, on our nature.”

“Same-sex marriage contravenes our understanding of an enduring moral order. Which is at the root of being a movement conservative,” said Roberts. “It doesn’t mean you’re a bad person, it just means it’s an opportunity for people like us at Heritage to persuade you otherwise.”

Roberts made clear that there are “conservatives who are not movement conservatives because they are weak and wrong on the social issues. Marriage, transgender stuff.”

At the end Rubin and Peterson shook hands as an emotional Peterson choked up, his eyes welling up with tears.

The duo asked many of the right questions but arrived at some spectacularly wrong answers.