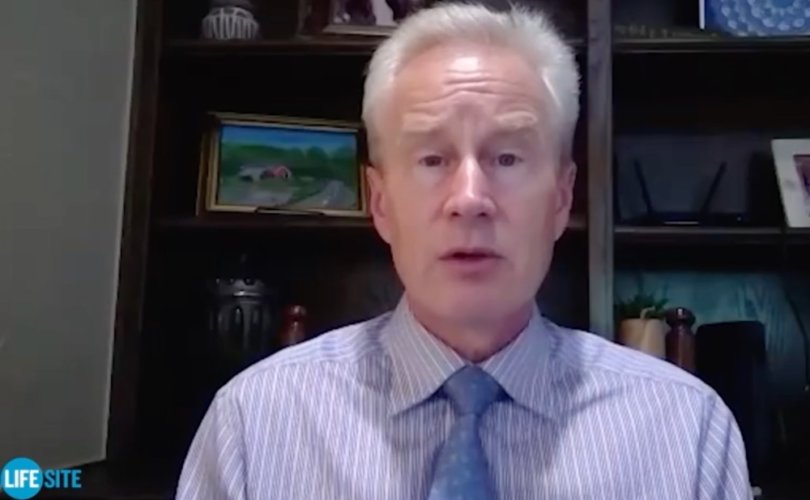 “What we’re seeing now is the utilization of vaccines as an inroad to global human compliance. Subjugation of the entire world’s population at the same time, via the same method. Having our rights linked to the end of a hypodermic needle,” declared McCullough, a renowned physician and prolific writer and speaker, during the health conference “Reclaiming Science Together” held Friday in Bath, England.

During Friday’s conference, however, he frankly described what he believes to be a sinister strategy behind the handling of the COVID “crisis,” in service of a global, malignant agenda.

He noted to the conference audience that just prior to his talk, he had given podcast host Joe Rogan a copy of a recently published book he co-wrote with John Leake, titled “The Courage to face COVID-19: Preventing Hospitalization and Death While Battling the Bio-Pharmaceutical Complex.”

He explained that it “deals with the crime of the suppression of early treatment,” which he said was “integral to create fear, suffering, hospitalizations and deaths in order to prepare the world to accept mass vaccination.”

According to McCullough, it doesn’t matter whether the “vaccine” is a genetic one, such as those being used in the West, or a “kill virus vaccine,” which he said is being used in the East. In his view, they accomplish the same purpose: They subjugate our medical, social, and economic freedom.

“Because those who are under the duress of taking the vaccine are given the most agonizing decision: The decision to take a product they know will cause harm to their bodies, or lose their livelihood. Or in some countries, lose their type of governmental financial assistance, or in some countries, lose access to their bank accounts,” McCullough said.

He noted the vaccines are also being “tightly tied” to the ability to carry out social activities like going to school or church.

“What we’re seeing now is an attempt for a global world government through the context of medical crisis and medical relief,” McCullough said.

“The next step in this process is the World Health Organization (WHO) global treaty that will bind countries into this type of totalitarian servitude,” he added, referring to recently proposed amendments to the WHO’s International Health Regulations, that many have pointed out would compromise the sovereignty of nations in the case of a “health emergency.”

“In my view, the only court that’s open now is the court of public opinion,” said McCullough, adding that for those “on the line,” he believes that “our challenge is to make our case” here.

“The sacrifices are just starting, and I think the stakes will get higher and higher. I think the vaccines are just one chapter in a very, very dark narrative that’s being handed to us,” he continued.

McCullough then issued a rousing call to resist and fight the malevolent agenda behind the COVID-induced medical, social and economic tyranny.

“And I encourage each and every one of you to have strength and resolve beyond anything you think you could have possibly done in your life. To make this the line. It has become clear, this is the line. It’s only by holding the line that we actually stop this freight train.”

“There is a vaccine cabal — vaccine stakeholders … we know you’re listening. And my message to you is that we are bold, and we are relentless, and we are unstoppable, and we have the truth. And the truth will prevail.”