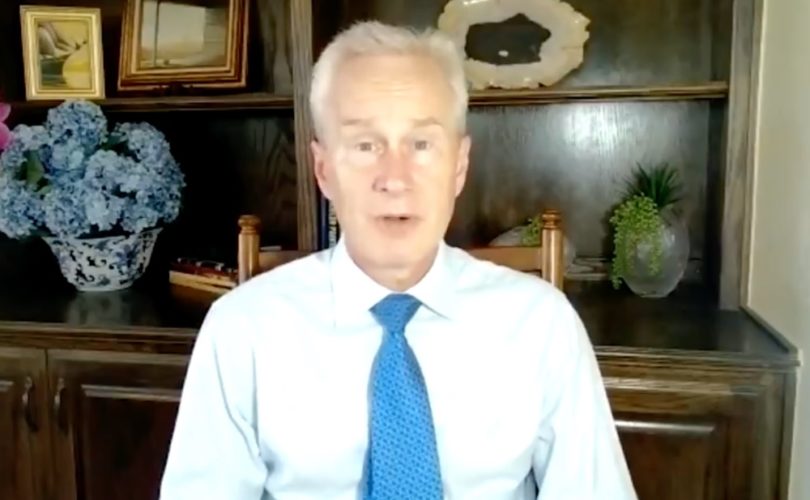 (LifeSiteNews) — In a recent interview, distinguished internist, cardiologist, and epidemiologist Dr. Peter McCullough shared how studies have indicated that synthetic mRNA from the Pfizer and Moderna experimental COVID vaccines may last permanently in the body, can also transfer to the unvaccinated, and is “changing the human genome.”

“It looks like the messenger RNA is transferring from the vaccinated to the unvaccinated now,” McCullough told Tanya Gaw from Action4Canada on November 24 (beginning at 39:24).

The Dallas-based physician has had a renowned career in the medical field, including authoring 677 articles in scientific peer-reviewed journals, and remains the most published individual in his field in history.

McCullough referenced an article of his where he cited a study by Helene Banoun showing that lipid nanoparticles that carry the mRNA spread throughout the body and “have been shown to be able to be excreted through body fluids (sweat, sputum, breast milk) and to pass the transplacental barrier.”

“And in a paper by Fertig and Colleagues, the messenger RNA is found circulating in blood for at least two weeks” (here), the physician told Gaw. “And the curves were not going down. That’s as long as they looked.”

“Röltgen and colleagues has found messenger RNA in the vaccinated in lymph nodes for months,” he explained. “It looks like the body’s not clearing it out” (study).

‘It looks like the messenger RNA IS transferring from the vaccinated to the unvaccinated’ ~ Dr Peter McCullough pic.twitter.com/qk4RcjHBZO

Finally, another study “from Hanna and colleagues in JAMA showed that the messenger RNA is in the breast milk of ill-advised women who took the vaccine during pregnancy or afterwards,” he said.

Summarizing these thoughts, McCullough proposed the rhetorical question: “Could you actually take a vaccine inadvertently by close contact, kissing, sexual contact, [or] breastfeeding? It looks like the answer is ‘yes.’”

Furthermore, he explained that the mRNA has “never been demonstrated to actually leave the body. They look like they’re permanent, as well as the spike protein that’s produced after them. This is very disturbing.”

“This messenger RNA, it looks like it’s for keeps. Every shot is accumulating in the body with no ability for the body to get rid of it,” the former president of the Cardiorenal Society of America explained.

Discussing the ramifications of this, McCullough explained providing advice for his patients was very difficult. Having first advised his unvaccinated patients to “refrain from kissing and sexual contact with a vaccinated person” for 30 days, he extended it “to at least 90 days” and was considering extending it from that point forward.

“I know there’s married couples and all kinds of personal implications there,” he commented.

The cardiologist related that he had also been told these realities were impacting dating apps where now “one of the most important checkboxes is if someone’s unvaccinated. People really don’t want to date vaccinated people right now.”

Citing two more studies, McCullough conveyed another alarming finding, that since the mRNA remain in the body for an extended period of time, “it looks like they do permanently install into the human genome through what we call reverse transcription.”

“So, this is disturbing that not only does the vaccine not get out of the body, but now they’re changing the human genome. This is shown in the human hepatoma cell line. And so it’s conceivable that two vaccinated people could actually pass the code for Pfizer or Moderna into the baby permanently,” he said. “So, this is very, very disturbing.”

“The government, as they developed these vaccines, they kind of rushed it through the final stages. There was no assurances that these were safe. There was no genotoxicity, no teratogenicity studies. And in autopsy studies, the spike protein produced from the genetic material is found in the heart … [and in] the brain,” the physician explained.

“So, I can tell you everyone who has taken the vaccine has this material in their brain, their heart, their adrenal glands, [and] reproductive organs. It’s really a terrible thought. My heart goes out to people who have taken the vaccine,” he lamented.

McCullough has been a most competent and compelling critic of the draconian COVID-19 restrictions, lockdowns, and mandates imposed over the 2 1/2 years. As an alternative, he has persuasively advocated for the cultivation of natural immunity and early treatment through effective therapeutics.

The prominent doctor, who has also provided significant expert commentary on Fox News, NewsMax, and Real America, told LifeSiteNews editor-in-chief John-Henry Westen in August 2021 that “the vaccines at this point in time have amounted to record mortality and injury and should be considered unsafe and unfit for human use.”