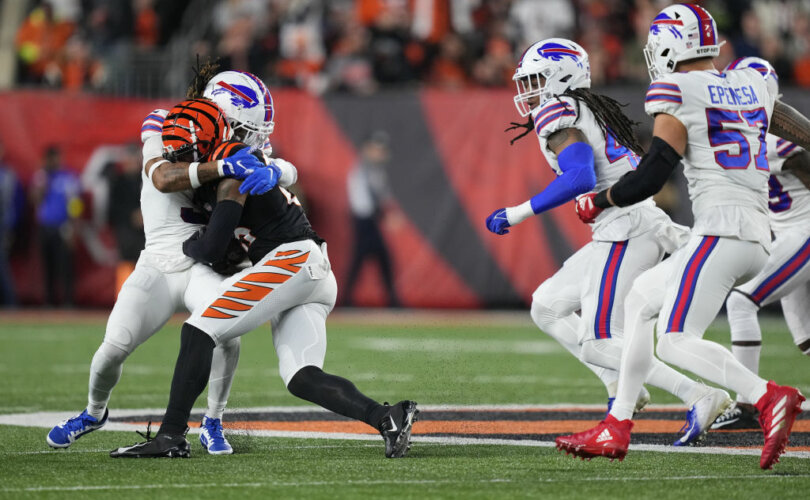 Damar Hamlin (#3 of the Buffalo Bills) tackles Tee Higgins (#85 of the Cincinnati Bengals) during the first quarter at Paycor Stadium on January 2, 2023, in Cincinnati, Ohio. Hamlin was taken off the field by medical personnel following the playPhoto by Dylan Buell/Getty Images

(LifeSiteNews) — The tragic cardiac arrest suffered by a 24-year-old Buffalo Bills safety on Monday Night Football may have been caused by “vaccine-induced myocarditis,” according to distinguished internist, cardiologist, and epidemiologist Dr. Peter McCullough.

“If Damar Hamlin indeed took one of the COVID-19 vaccines, then subclinical vaccine-induced myocarditis must be considered in the differential diagnosis,” McCullough told COVID vaccine journalist Steve Kirsch last night.

In the statement that was also amplified by the Association of American Physicians and Surgeons (AAPS), McCullough described the tragic event as “a classical cardiac arrest,” which was later confirmed to be accurate by the Buffalo Bills, and expressed solidarity in prayer with the entire nation for Hamlin’s “complete recovery.”

Hamlin is believed to have suffered cardiac arrest: “vaccine-induced myocarditis must be considered in the differential diagnosis,” states @P_McCulloughMD. via @stkirsch. https://t.co/HmrwJ8Sqxt

Kirsch announced in an 11:20 p.m. update that Hamlin had indeed received an experimental COVID-19 gene-based vaccine as “The Buffalo Bills is a 100% vaccinated team.” He likewise reported that he had received a communication from an anonymous source who “knows this for a fact.”

After making what may be considered a routine tackle on a Cincinnati Bengals receiver in the middle of the first quarter of play, Hamlin raised himself to his feet and then seemed to lose consciousness, falling backward onto the turf.

CPR was administered for nine minutes with players from both teams surrounding the fallen player, many exhibiting significant emotion and postures of prayer.  After the restoration of Hamlin’s heartbeat, an ambulance transported him to the University of Cincinnati Medical Center for continued testing and treatment.

After the ambulance had departed the field at Paycor Stadium, the head coaches of both teams conferred with officials and made the decision to suspend play and eventually postpone the game indefinitely, which is reportedly an unprecedented occurrence in the NFL.

ESPN commentators expressed shock, tremendous sadness and profound concern during the broadcast, stating they had never seen anything like this tragic event during an NFL football game.

In an October 18 article on McCullough’s substack channel, he cited studies demonstrating how cases of myocarditis have increased in the population from around 4 per million to approximately 23,256/million in the tender ages of 13 to 18 alone since the introduction of massive COVID-19 gene therapy vaccination campaigns and mandates two years ago.

Spontaneous reports since 2021 reveal the “highest risk group [for vaccine-induced myocarditis] was males age 18-24,” which becomes “explosive after the second injection,” with “deaths confirmed by autopsy.”

If such numbers of anything around 25,000 per million are accurate, the former editor of two medical journals stated this would equate to “a million young Americans [who] could have sustained heart damage from COVID-19 vaccination and some of them will be at risk for cardiac arrest and future heart failure.”

“These data suggest we should not be surprised by rising rates of sudden death in young persons with sports and during daily life including sleep,” said McCullough, who has himself authored 678 articles in scientific peer-reviewed journals and remains the most published individual in his field in history.

READ: Former NFL player who called for COVID jab resisters to be jailed dies suddenly at 38

“There can be no more urgent need to halt vaccination and commit a substantial research effort into screening, detection, prognosis, and management of COVID-19 vaccine induced myocarditis. The stakes are high — an entire generation is at risk,” the cardiologist concluded.

Hamlin’s cardiac arrest highlights what has been an ongoing trend of athletes collapsing, dying and suffering serious heart and blood complications since the introduction of experimental mRNA gene therapy injections marketed as “COVID-19 vaccines.”

In November 2021, Dr. Michael Yeadon began sounding the alarm about the compounding increase of athletes collapsing or even dying on the field after their age group’s reception of the injections.

Last April, One America Network reported that more than 769 athletes had collapsed on the field during a game between March 2021 and March 2022. The average age of these athletes was 23.

And more recently, a video produced by what appears to be an anonymous source documents news reports of “1,000 Athletes Collapsing, Dying, Heart Problems, Blood Clots – March 2021 to June 2022.”

Another source called Real Science, whose authors expressly desire to remain anonymous, complements the above video compilation with a documented list of 1,616 athletes who suffered cardiac arrests and other serious health issues, including 1,114 deaths, since the COVID-19 vaccine rollout around January 1, 2021.

But evidence for significantly increased death rates is not limited to the sphere of athletics.

In January 2022, Scott Davison, the president of OneAmerica insurance in Indianapolis, called attention to the industry’s 40% increase in 2021 third-quarter death rates, which were the highest the company has “seen in the history of the business.”

Soon after this revelation, Kirsch crunched the numbers and provided an extensive argument for why these excess non-COVID-related deaths were most likely caused by COVID vaccines. The MIT graduate and extensively successful entrepreneur explained such a catastrophe would only happen by pure chance every 2.8e32 years, which is “basically never.”

In the United States, while the Centers for Disease Control’s passive Vaccine Adverse Event Reporting System (VAERS) received only around 150 annual death reports before 2021, it currently shows 1,490,160 reports of adverse events after COVID vaccines administered between Dec. 14, 2020, and December 23, 2022. This data includes a total of 33,334 reports of deaths, 187,676 hospitalizations, and 61,575 permanent disabilities.

And there remains plenty of evidence that these numbers are just the “tip of the iceberg” considering a 2010 Harvard-executed study commissioned by the Department of Health and Human Services found that “fewer than 1% of vaccine adverse events are reported” in VAERS.

Around the same time, Yeadon, who is a former Pfizer vice president and chief scientist for allergy and respiratory, stated, “If someone wished to harm or kill a significant proportion of the world’s population over the next few years, the systems being put in place right now will enable it.”