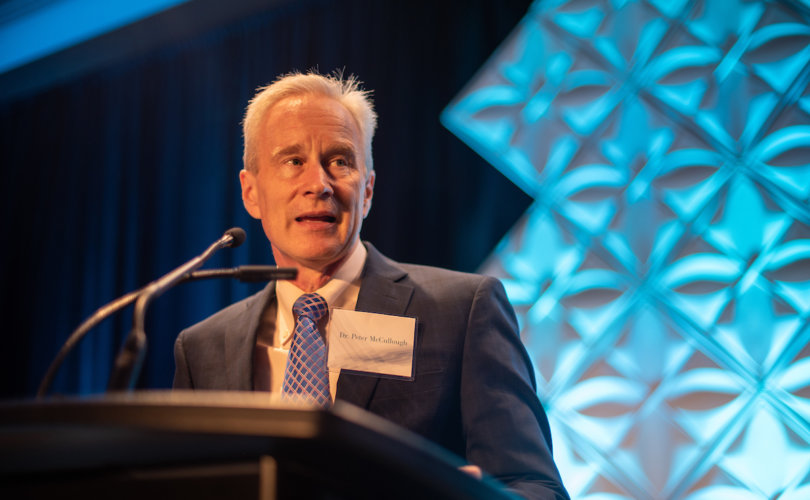 (LifeSiteNews) – Dr. Peter McCullough, one of the world’s leading cardiologists and a prominent critic of the mainstream narrative on COVID-19, has been suspended from Twitter.

“First with no warning they stripped all my followers to zero, then they executed their kill machine–SUSPENDED! Will let you know if I come off life-support!,” McCullough wrote.

Representative Thomas Massie (R-Kentucky) condemned the suspension in a tweet, by posting a screenshot of McCullough’s suspended account and writing:

To say private companies have this right is to ignore their coordination with government censors, and the undisclosed influence they have on elections.

To say private companies have this right is to ignore their coordination with government censors, and the undisclosed influence they have on elections. pic.twitter.com/OSdi3Rq1k9

Many other Twitter users, among them medical doctors and health professionals, criticized the ban of McCullough on the platform. Fellow COVID jab skeptic Trudy Seivwright MD wrote: “The purge has begun. Dr Peter McCullough has been suspended.”

She called on Elon Musk to “get a handle on this censorship. It’s perverse and unethical.”

The purge has begun.

Dr Peter McCullough has been suspended.@elonmusk I hope you can get a
handle on this censorship. It’s perverse and unethical. pic.twitter.com/WVDYKHfvwe

Her comments were echoed by Dr. Aaron Kheriarty, who has also extensively warned about the dangers of COVID policies and injections.

Dr McCullough is simply a giant. Twitter destroys many of its best. Peter, you are too good for this sh**hole platform. https://t.co/eS7DJyFdq4

McCullough is a prominent leader in the resistance against the draconian COVID policies and the Great Reset agenda. He had over 512,000 followers on Twitter at the time of his suspension.

The internist, epidemiologist and cardiologist has published more than 50 peer-viewed-reviewed publications on COVID-19, testified before the U.S. Senate on the pandemic response, and is one of the most cited doctors in the medical field.

He has been an outspoken critic of the COVID vaccines and COVID-related measures in general, and played a prominent role in a number of conferences LifeSite has hosted, warning about the COVID agenda.

— Article continues below Petition —
Demand that the Archdiocese of Indianapolis let Kim Zember speak!
Show Petition Text
5014 have signed the petition.
Let's get to 6000!
Thank you for signing this petition!
Add your signature:
Show Petition Text

In an interview with LifeSiteNews editor-in-chief John-Henry Westen in August 2021, McCullough said that “the vaccines at this point in time have amounted to record mortality and injury and should be considered unsafe and unfit for human use.”

McCullough has had legal disputes with the social media platform before. In June of 2022, he and Dr. Robert Malone filed a lawsuit against Twitter, arguing that the social media giant silenced them for posting truthful information about COVID-19.

At the time, Twitter had banned an account run by McCullough with the handle “@cov19treatments,” which has not restored to this day.

Due to his stance opposing COVID injections, the Dallas-based epidemiologist has had to fight off many attacks against him in the past months, including some by the medical establishment. The American Board of Internal Medicine threatened disciplinary action against McCullough earlier in the year.

His ban comes amid renewed talks of Tech mogul Elon Musk purchasing the platform. Many hope that Musk’s takeover of Twitter would transform it into a more free-speech-friendly platform and stop the rampant censorship.