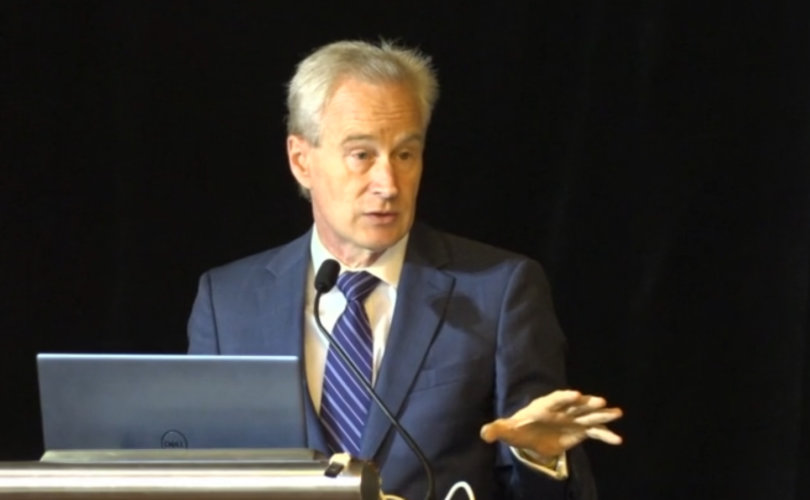 (LifeSiteNews) — Prominent American physician Dr. Peter McCullough explained to podcast host Joe Rogan how it was possible for the entire world to be taken under a “mass formation psychosis” regarding the mainstream COVID narrative.

In an interview with the immensely popular Joe Rogan Experience podcast, Dr. Peter McCullough, an expert on the early treatment of COVID-19, used the theory of “mass formation,” proposed by Belgian clinical psychology professor Dr. Mattias Desmet, to explain how the entire world has fallen under the mainstream media COVID narrative “spell.”

McCullough outlined the four key steps that need to be taken to effectively hypnotize the masses into complete compliance, even when what is being asked is illogical or blatantly contradicted by reality.

“First, there must be a period of prolonged isolation, lockdowns,” McCullough told Rogan. “Number two, there must be a withdrawal of things taken away from people that they used to enjoy, that has happened.”

“Number three, there must be constant, incessant, free-floating anxiety. All this news cycle, all the deaths, hospitalizations, more variants, new strains, people becoming scared over and over again,” continued the doctor. “And the last thing, number four, the capper is there must be a single solution offered by an entity in authority, and in this case it’s clear, worldwide the solution was ‘vaccination.’”

As reported by LifeSiteNews, Desmet’s theory states that the COVID narrative was bought into heavily because it presented millions of disaffected moderns with an identifiable enemy, a battle plan to combat it, camaraderie with fellow soldiers, and something for which to sacrifice even the most fundamental rights and liberties. Effectively, this led to “a kind of mental intoxication of connectedness, which is the real reason why people continue to buy into the narrative, even if it’s utterly absurd or blatantly wrong.”

Describing further how well Desmet’s theory fits in with present day reality, McCullough states, “[Vaccination] is not a U.S. program, it’s not a European program, it’s everywhere. And you know what, Joe? It doesn’t matter what vaccine it is. It could be ChinaVax, it could be CoronaVac, it could be NovaVax … Pfizer, Moderna, J&J.”

“It’s interesting that it doesn’t even matter what vaccine it is, it’s just ‘take a vaccine, take any vaccine,’ and what mass psychosis says is ‘number four, the solution: There is no limit to the absurdity of the solution.’”

According to Desmet’s model, the coronavirus hypnosis is far from the first time a “mass formation psychosis” has occurred, and unfortunately, the result is often catastrophic.

Giving historical examples of the gravity of this phenomenon, both Desmet and McCullough mention how this is the same process that allowed for cults such as Jonestown to convince all its members to commit suicide, and how political leaders in Nazi Germany and the Soviet Union convinced their populations to allow for the emergence of tyrannical and murderous regimes.