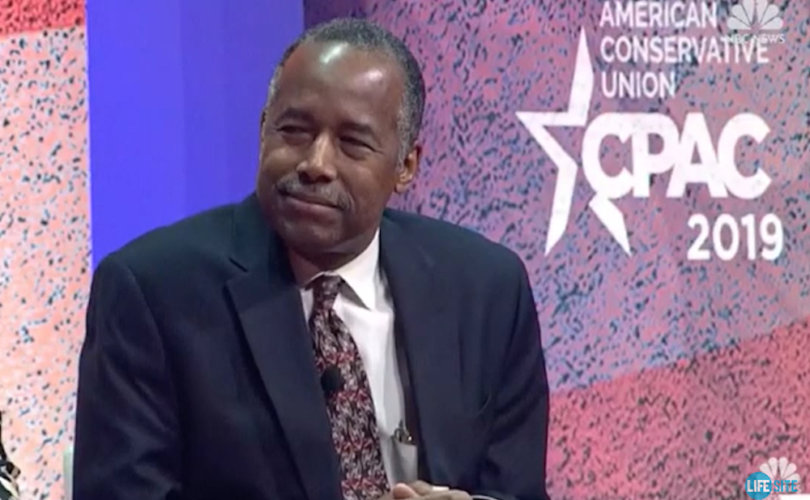 Speaking to a packed house at the Conservative Political Action Conference (CPAC), Dr. Carson offered his remarks — tinged with awe and wonder — as only a man who has lovingly helped, saved and cared for thousands of young lives is able.

“God has orchestrated an incredible situation where the egg and the sperm come together, and within a matter of 10 to 12 weeks, you can see the little fingers and the little toes, and the little nose, and the face, the heart is starting to beat,” said Carson. “It’s absolutely amazing.”

“And then (the brain) goes on to develop very rapidly from there,” continued Carson. “Hundreds of thousands of neurons every single day.”

“I’ve had the privilege of being able to operate on little babies that were 25, 26, 27, 28 weeks’ gestation,” said the world famous neurosurgeon. “I can guarantee you, they can feel, they can react.”

“You have to give them anesthesia, if you’re going to cut them. Believe me,” said Carson, who added, “They can also respond to comfort and to warmth.”

“For somebody to say that’s a meaningless bunch of cells, honestly,” said Carson, “is just totally ignorant.”

Carson said the act of aborting a child is “barbaric,” and that for late-term abortions, where the baby could live outside the womb, he used the term, “murder.”

“The level of barbarism that (late-term abortion) requires … I quite frankly don’t know how people can do it,” said Carson.

Dr. Carson later recounted a conversation with the head of the American Civil Liberties Union (ACLU) in which he described talking a 33-week pregnant woman — who carried in her womb a baby with a congenital abnormality — out of having a late-term abortion.

When the ACLU head claimed “We speak for those who cannot speak for themselves,” Carson countered, “What about that baby?”

“After I told him that I operate on babies that were 25, 26, 27 weeks,” Carson asked him, “Would you speak for those babies?” The man assured Carson he would.

“So they’re outside, and you would speak for them, but the one who’s further advanced and in the safest place they can possibly be, you won’t speak for that one?”

“He said, ‘I realize that doesn’t make any sense, but I believe a woman can kill that baby until the second it is born,’” related Carson.

Carson asked him if he would admit to that in public, and the man said, “No.”

“Now they’re willing to say it in public,” said Carson, referring to recent developments in New York and Virginia, where liberal lawmakers have clearly signaled not only their support for aborting children up until the day they are to be born but also for infanticide.

“That’s how far the pendulum has swung,” added Carson. “It’s going to be up to us people with morals and values to stand up to it because we cannot let this happen in our society.”

Carson, who now serves in the Trump administration as Secretary of Housing and Urban Development, delivered his remarks at the National Harbor Resort and Convention Center, just outside of Washington, D.C.

He shared the stage with Washington state Congresswoman Cathy McMorris Rodgers, and Concerned Women of America president Penny Nance, who hosted their discussion.