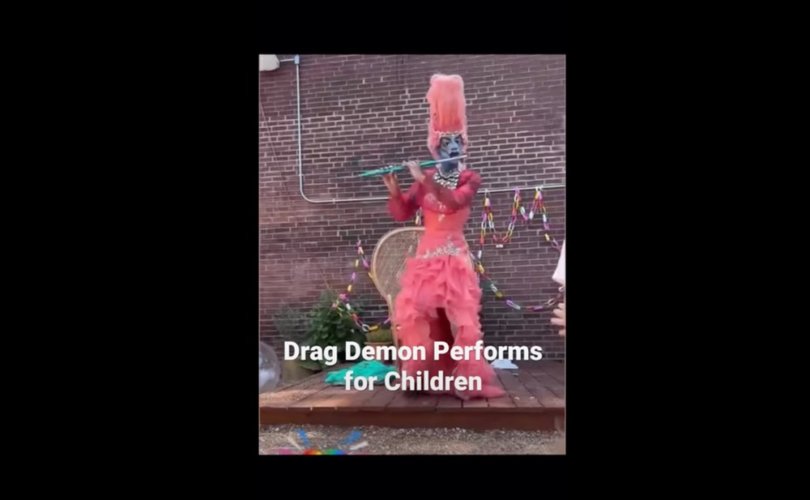 (LifeSiteNews) — A disturbing video depicting a self-proclaimed “demon queen” putting on a bizarre performance for a group of toddlers was made private after it was retweeted by a conservative podcaster.

The original video showed a man who was covered in blue paint and clad in a demon outfit playing a flute on stage for a group of young children.

Twitter user “Maxi Glamour,” whose biography states he is a “Demon Queen of Polka and Baklava” who “div[es] deep in the realms of chaotic fantasy, absurdism & liberation,” removed the video from public view after Daily Wire podcaster and author Matt Walsh retweeted it with the comment, “Self-described drag ‘demon queen’ performs for a group of toddlers.”

“Someone might want to go ahead and grab this video before it’s deleted,” Walsh added.

YouTube channel Warriors for Christ was able to repost the clip to the video-sharing website before it was pulled.

On his website, “Maxi Glamour” is described as ​​”a non-binary multidisciplinary artist and community organizer based out of St. Louis.”

According to his write-up, the performance artist is “notorious for painting [himself] blue and using elements of fantasy and social theory in performance art.”

“Maxi has since used [his] platform for racial liberation from a gender expansive lens,” the website description continues, adding that the performer “is invested in ameliorating the lives of St. Louisans by directly combatting some of the negative consequences of white supremacy and unregulated capitalism.”