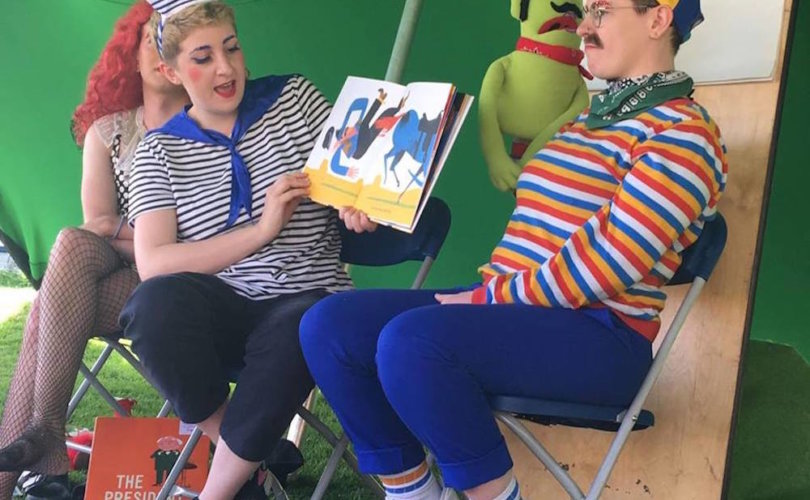 DUBLIN, Ireland, April 18, 2019 (LifeSiteNews) – A group of drag performers is up in arms over a Dublin library canceling a scheduled event to read to children, pressuring local authorities to revise their original explanation for the event.

Dun Laoghaire Rathdown (DLR) libraries had previously invited a “drag collective” called Glitter Hole (GH) to hold a June 26 storytime event at Deansgrange Library, to coincide with LGBT “pride” week. But on Monday, GH announced on social media that the event had been canceled.

“This event was programmed as an age appropriate, family-friendly story time session. However, following a review in terms of age appropriateness, this event will not now go ahead at this time, and may be rescheduled as part of a future Book Festival lineup,” DLR explained in a statement,

GH’s Twitter and Instagram accounts are full of sexually-charged language and imagery. The group’s logo is a caricature of male buttocks, and one Instagram post advertising another Drag Storytelling event features a baby doll with an upside-down cross on his forehead and a reversed pentagram on his belly. Yet GH claimed “age appropriateness” was just cover for DLR’s real rationale.

“Over the weekend we have been inundated with extremely violent homophobia from a frighteningly large group of bigots who believe that a few drag queens reading books to children amounts to child abuse,” GH claimed. “The library decided that the event was a safety risk, which we accepted given the scale and gravity of the vitriol that was being spewed on twitter.”

But DLR’s statement, the drag group complained, implies “that the content of our drag shows for adults has deemed us inappropriate children’s storytellers” and omits any mention “of the safety concerns for the performers and audience of the event due to the ongoing abuse we’re receiving online.”

Later that day, DLR issued a new statement conforming to GH’s narrative and omitting any mention of content concerns. “We wish to clarify that the cancellation was due to our significant concern at the high level of degrading, inappropriate comments on social media about the performers and library staff,” it said. “dlr Libraries remain safe, inclusive and welcoming places for all and offer a diverse, cultural programme.”

Despite the new statement, GH complained Tuesday that they haven’t gotten an apology from DLR for the original statement:

We are so grateful to all of the people who have spoken out over the past two days against the way we've been treated. To update, we have still not received an apology from @DLR_Libraries regarding the matter and are not receiving any communication from them at all presently.

Despite GH’s insistence that its adult shows have no bearing on its ability to conduct inoffensive performances for children, other Drag Queen Storytime events around the world have drawn controversy for the individuals they’ve put in close proximity to children (such as performers behind X-rated skits involving children’s characters and at least one convicted pedophile), and for attracting radical transgender protesters.