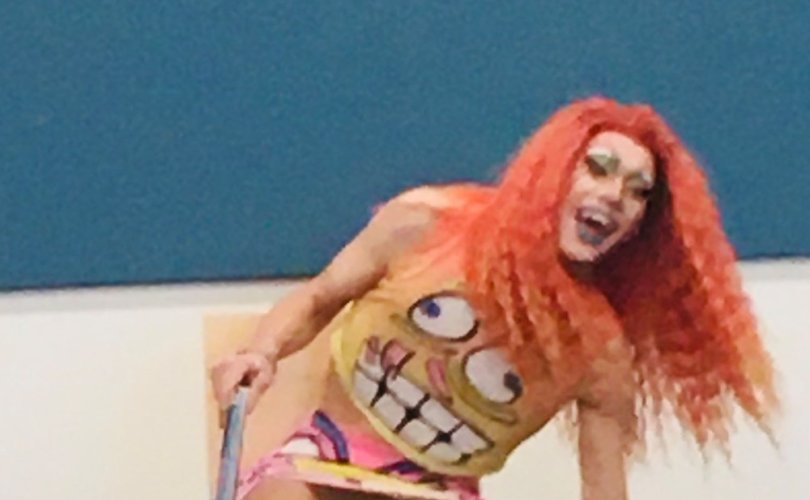 MINNETONKA, Minnesota, October 31, 2019 (LifeSiteNews) – A drag queen who took part in a recent Drag Queen Story Hour event in a Minnesota town is under fire for briefly exposing his crotch just a few feet from young children.

Earlier this month, the group Child Protection League posted a photo from the event that shows drag queen “Sasha Sota” at Ridgedale Library in Minnetonka. Sota is sitting in a chair at the front of the room, spreading his legs as he reaches down to grab a book, revealing a view of his crotch in tight, flesh-colored leggings at the eye level of children in the audience.

“What kind of parents bring their children to watch an adult strip club entertainer read transgender books?” CPL asked, urging members of the community to contact Hennepin County Public Libraries to demand that future Drag Queen Story Hours be canceled. “One glimmer of hope is that 2 of the events were cancelled (sic),” the group said; “however, there was a sign saying they are looking forward to rescheduling them.”

Sota was accompanied at the event by drag nightclub performer “Gemini Valentine.”

Children’s advocate Anne Taylor, who attended the event, wrote that Sota “strode in suggestively past the children” before sitting down, and spread his legs multiple times as he read two books to the children, both of which were about dispelling gender stereotypes.

CPL board chair Julie Quist told Church Militant that such behavior was doubly concerning in light of library officials’ refusal to put drag readers through background checks. “It's the same agenda which is bringing kids in and letting them think that exposing your genitals is a perfectly normal thing,” she said. “We're looking at the real onslaught of pedophilia becoming acceptable.”

The news provoked numerous outraged responses from observers across the country:

If this does not anger you to fight with everything in your soul against the evil one and his minions, Nothing will.  This disgusting man in women's clothes did not wear underwear and showed his genitalia to children from 3-7 years old at a library. EVIL!https://t.co/paGIFVmEQF

Has he been arrested for indecent exposure in a public library???

Oh I forgot! He is a member of the protected class of LGBT members. He can do whatever he wants with no consequences. ����#StopDQSHhttps://t.co/BnjKM0tX6T

The lines were crossed long ago, but this takes the cake. The left is abusing our nation's children, we must demand laws to protect these innocent kids.https://t.co/U4hTFozySL

Is it transphobic and racist to have a problem with this? https://t.co/ZKgxVcH5Lf

Sota responded to the uproar by insisting that he was merely “picking up a book” and was annoyed with himself for forgetting to wear panties. “I’m not any of the things they’re saying about me,” he told City Pages.

At The Federalist, Chad Felix Greene argued that regardless of Sota’s intent and exact attire, “the image perfectly demonstrates the concern of conservatives and parents everywhere. Adult entertainment is not suitable for children.”

“Many LGBT advocates simply do not respect parental concerns” and recognize that setting any limits on Drag Queen Story Hour would “acknowledge that conservatives are correct about the adult nature of the majority of LGBT culture and would therefore undermine their primary goal,” he wrote. These performers “came unprepared for their responsibilities and instead interpreted their performance as being like any other drag show. The performers did not consider their young audience or that their outfits were inappropriate. They did not think to protect the children watching them, accidental exposure or otherwise.

“And no one who advocates for them does either,” Greene laments.