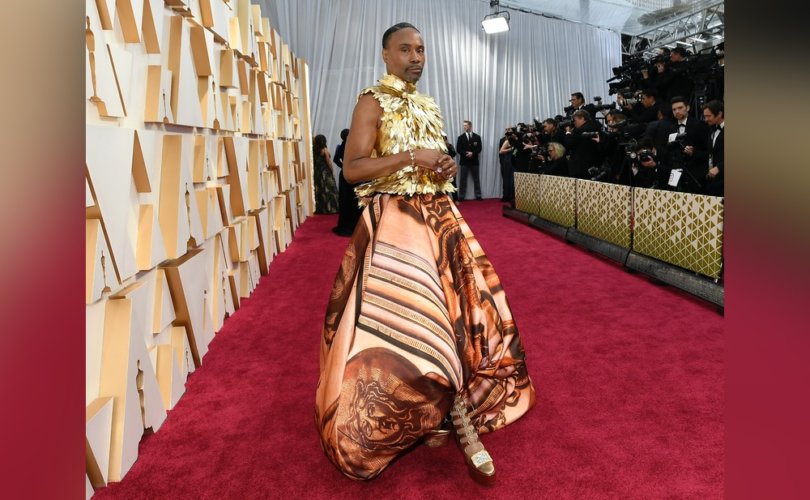 February 11, 2020 (LifeSiteNews) – Billy Porter – the drag queen LGBT activist who won a Tony award in 2013 for his headline role as a drag queen in the Broadway production Kinky Boots – is unhappy that a LifeSite petition is asking Sesame Street to drop the upcoming show where he appears in drag.

Regarding the petition, Billy Porter has been quoted in the New York Post’s Page Six supplement as saying: “Stay out of my bedroom and you will be fine — that is none of your business.”

But Gualberto Garcia Jones, Director of Advocacy at LifeSite, responded to Porter by saying: “No one wishes to intrude upon Billy Porter’s private affairs. What 55,000 people have asked is to protect children from being exposed to sexualized, gender-confusing attire and notions on Sesame Street.”

“Exposing children – who just want to see their favorite puppets – to sexual concepts beyond their years and maturity is just wrong. Allowing a man who is dressed up as a gender-bending man-woman is a sexual act that has no place on Sesame Street,” Garcia Jones continued.

“LifeSite and a majority of sane people in this country oppose adults trying to impose their sexual proclivities upon children. These sexualized concepts and ideas are ones which children do not comprehend, and to which they cannot consent,” he concluded.

Porter made big news when it was revealed that he intends to appear on Sesame Street in drag.

LifeSite has contacted AT&T, the parent company of Warner Media and HBO Max – producers of Sesame Street – to discuss how this episode will harm children, but as of press time, has received no response.

Dr. Paul McHugh, former psychiatrist-in-chief at Johns Hopkins University, studied the phenomenon of gender confusion for 40 years. He has said that the notion of gender fluidity “is doing much damage to families, adolescents, and children and should be confronted as an opinion without biological foundation wherever it emerges.”

As an actor and as an LGBT activist, Porter is no stranger to gender-confusing ideas, dress, and roles.

Porter has made a name for himself, starring in Broadway productions like the aforementioned Kinky Boots and in the television production Pose.

Wikipedia offers these short synopses of both productions:

Kinky Boots: “Based on the 2005 British film ‘Kinky Boots,’ written by Geoff Deane and Tim Firth and mostly inspired by true events, the musical tells the story of Charlie Price. Having inherited a shoe factory from his father, Charlie forms an unlikely partnership with cabaret performer and drag queen Lola to produce a line of high-heeled boots and save the business.”

Pose – “Pose is an American drama television series about New York City's African-American and Latino LGBTQ and gender-nonconforming ballroom culture scene in the 1980s and, in the second season, early 1990s. Featured characters are dancers and models who compete for trophies and recognition in this underground culture, and who support one another in a network of chosen families known as Houses.”

Porter has starred in this Pose since 2018. Wikipedia explains “ballroom culture” thusly:

“Ball culture, drag ball culture, the house-ballroom community, and similar terms describe an underground LGBT subculture that originated in 1920s New York City, in which people ‘walk’ (i.e., compete) for trophies, prizes, and glory at events known as balls. Ball participants are mainly young African-American and Latin American members of the LGBTQ community. Attendees dance, vogue, walk, pose, and support one another in one or more of the numerous drag and performance competition categories.”

“Transgenderism is not about ‘Love.’ It is a disorder – gender dysphoria – which has absolutely no place on a children's program,” the LifeSite petition says. “By contributing to this social contagion, ‘Sesame Street’ is forcing children to deal with adult concepts and notions about sexuality which are beyond their level of maturity, and which can leave psychological scars.”

“Many jurisdictions define this kind of behavior as abuse.”

If you haven’t yet had a chance to read this petition, please CLICK HERE. And then, please consider signing and sharing.