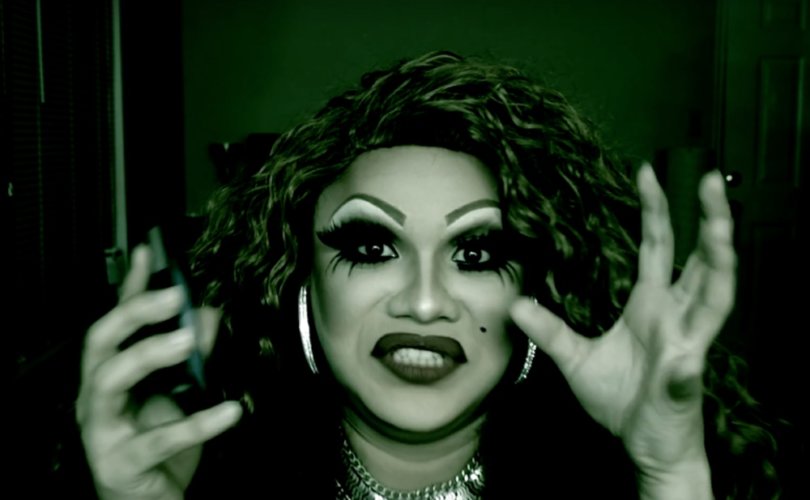 HOUSTON, Texas, March 19, 2019 (LifeSiteNews) – A pro-family activist group has uncovered the truth about the pedophile past of a drag queen who reads to young children at a public library’s “Drag Queen Storytime.”

Thirty-two-year-old Albert Garza is a registered sex offender who was convicted of assaulting an eight-year-old boy in 2008, yet that has not hindered him from dressing in garish women’s clothing, calling himself “Tatiana Mala Nina,” and performing in front of kids.

When the story broke, one news site suggested an alternative name for “Drag Queen Storytime,” with a headline that blared, “Pederast Story Hour in Houston.”

When the Freed-Montrose Public Library failed to respond to inquiries by Houston MassResistance, the activist group – which had been protesting the program – conducted its own investigation into the background of the drag queens as well as the way in which “Drag Queen Storytime” is conducted. They ended up compiling a detailed 163-page report, replete with disturbing photos, documenting “the lurid activities of some of these ‘Drag Queens’ who read to children, and how the library blatantly disregarded its own rules.”

“The library had failed to do a background check on any of the ‘Drag Queens,’ despite requirements and warnings by MassResistance,” said a statement from the group.

“If they had done their job and due diligence, they might have said wait – maybe it’s not a good idea to have a sex offender who at 200 pounds and 5-foot-11 assaulted an 8-year-old boy,” said Tracy Shannon, co-leader of Houston MassResistance.

“Most parents would not allow that individual to sit in this library, sashay in, and be held up as a role model to our children,” said Shannon.

As a result, the Freed-Montrose Public Library where the child drag grooming occurred issued the following statement:

We assure you that this participant will not be involved in any future HPL programs.

In our review of our process and of this participant, we discovered that we failed to complete a background check as required by our own guidelines. We deeply regret this oversight and the concern this may cause our customers. We realize this is a serious matter.

We are taking the appropriate action to ensure that the status of every participant in every program throughout our system is verified. We will continue to review our process to ensure that this cannot happen again.

Once again, we apologize for our failure to adhere to our own process in this matter and to the hundreds of parents and caregivers who have enjoyed this program with their children.

While Alberto Garza’s social media and Youtube accounts have been deleted, KHOU 11 reported last summer on a Drag Queen Storytime program conducted in a similar manner at another Houston public library:

“The lunatics who promote Drag Queen Storytime claim the idea is ‘to promote love and acceptance,’” said Breitbart’s John Nolte. “Rational and caring parents, who understand that protecting your child’s innocence, especially from things like adult sexuality, are suing the city to stop this madness. They claim that the government sponsoring ‘secular humanism’ violates the Constitution’s Establishment Clause on religion.”

“We now live in a country where your local library cannot sponsor reading of the Bible, but a fat guy in a dress is perfectly legal,” added Nolte.

“Leave the sexual social engineering out of the lives of the youngest of our children,” said Hot Air’s Karen Townsend. “If this has happened in your nation’s fourth largest city, you can rest assured it is happening elsewhere.”

“Remember, if it wasn’t for the nosy parents of Houston Mass Resistance, the progressives of the Houston Public Library, fully supported by Mayor Sylvester Turner, would have continued to allow this creep to read story books to children just like the little boy he molested,” said The American Conservative’s Rod Dreher.

“The parents of MassResistance have realized that the LGBT juggernaut is rolling through our institutions virtually without opposition, and that only by genuinely resisting these ideologues can they be stopped,” noted Jonathan Van Maren in his LifesIteNews blog yesterday. “[They] are certainly showing parents what it looks like to fight.”