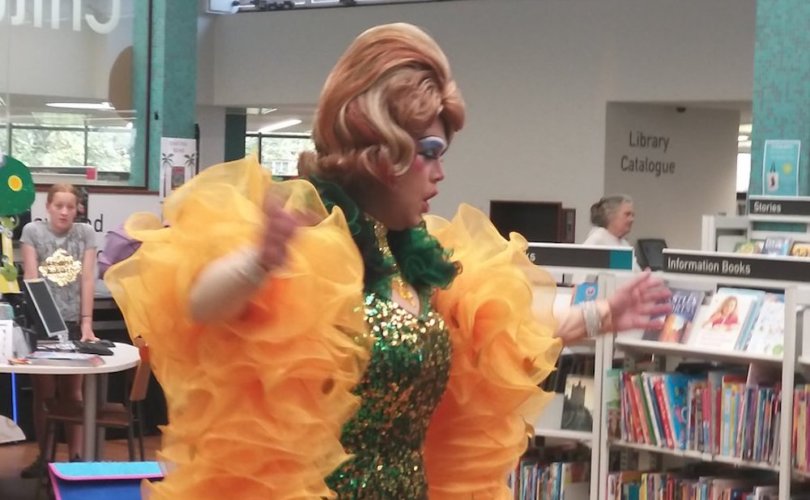 DEVON, England, August 7, 2019 (LifeSiteNews) – A drag queen in the United Kingdom was caught on camera teaching small children at a library story hour how to perform the sexually-suggestive dance move called “twerking.”

Mama G is a cross-dressing man and drag artist who “has appeared at libraries, theatres, bookshops and cafes all over the UK,” according to the Petite Pantos theater company. Devon Libraries promoted his Story Hour events in North Devon as “sharing tales that celebrate being who you are & loving who you want.”

Video recently emerged from one of those Drag Queen Story Hour events, showing Mama G explaining and demonstrating before an audience of children how to twerk.

“All you need to do is you just need to stand with your feet sort of shoulder-width apart like so…and then you crouch down in this sort of position, so you’re bump’s sticking out,” Mama G says, briefly looking back to ask someone off-camera if they’re “taking this all in.” And “then you just move your bum up and down like that. And that’s twerking.”

Numerous parents and other concerned citizens have spoken out against the performance, Devon Live reports.

“Wholly inappropriate for children,” one said, asking Devon Libraries “what on earth were you thinking.” Another asked, “On what planet do you think this sexualized womanface act is appropriate for young children?”

This is predatory behavior!

If parents won’t protect their own children, law enforcement must!

“My children would have found this alarming and confusing, and probably have been put off books for life,” Diana Toynbee said.

If you think it's normal for a 300 pound bearded man dressed like a demon clown twerking in front of the children while telling them “you can be boys or girls kids!” And then they bring out the drag kids so they can twerk and be handed dollars bills.. so brave so beautiful?

Bloke dressed normally teaching children to twerk – lock him up. Bloke in drag doing it- stunning and brave.

Whether its Beyonce or a drag queen, no one should be teaching young children how to twerk.

Libraries Unlimited, the charity that runs Devon Libraries, responded with a statement that didn’t address the specific objections, but insisted it was “committed to ensuring our libraries are welcoming, safe and inclusive places for all,” that it is taking its “responsibilities very seriously,” and had performed a Disclosure and Barring Service (DBS) check on Mama G.

After the controversy broke out, Mama G changed his Twitter profile so only approved followers can see it, but not before critics saved screenshots – including one of a tweet in which Mama G appears to ask children to send him their email addresses.

“You could always do some Mama G inspired arts and crafts!” he says. “If you want one of my colouring sheets for a rainy day, DM me your email!” Suffolk Libraries UK later put out a statement that Mama G claims the message was intended only for parents:

We’ve spoken to @mamagstories who has clarified that their tweet inviting people to DM them was aimed at parents. We are committed to promoting e-safety and we would never encourage children to share their personal details online. Safeguarding policy: https://t.co/vFEE6Os4cW

Utterly shocking.  As if his response was going to be “o yes I was aiming it at the kids” FFS ��

What possible evidential basis is there that men performing drag encourages child literacy…. really fascinated to know the thought process here as a literacy teacher.

Does Suffolk libraries have of childrens books about drag they want to promote?

Drag Queen Storytime events around the world have drawn controversy for both the sexual and gender-fluid themes they promote to children, as well as for the individuals they’ve put in close proximity to children, such as convicted sex offenders and performers behind X-rated skits involving children’s characters, and for attracting radical transgender protesters.