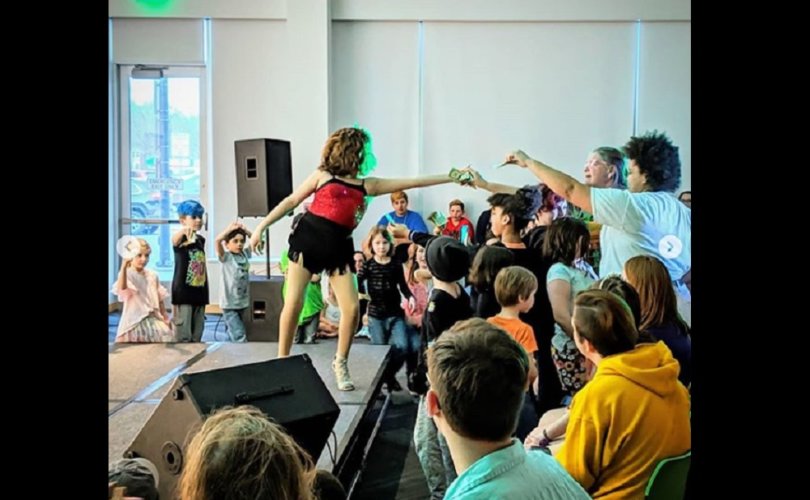 In the city that is home to Iowa State University, the public library offered music and dance drag performances by amateurs and professionals. Adults and children were in the audience on April 6 to watch gyrations, lip-synching, and exotic costumes during an evening that included  “all-ages” performances that were followed by a “teens only” show featuring “sparkles, costumes, free snacks, and mingling!” According to local reports, more than 240 people attended the fourth such event organized by the library.

Children in the audience were seen handing money to the performers, in much the same way that strippers and other such performers are rewarded. Librarian Tanvi Rastogi posted on Instagram her photos of the event. On Instagram, one person commented, “These photos are amazing, they capture just how awesome the show was.” In September, during the Ames gay pride festival, similar drag performers accepted cash on stage from kids in the audience.

According to the Facebook page for the event, “Drag is for everyone.” It said, “Grab your best friend, your preschooler or grandmother, your dad or your neighbor and your neighbor’s kids, roommates, bandmates or that cool kid that sits next to you in math class and check out the free all age-friendly performances by professional and amateur drag performers.”

Iowa State Daily provided a synopsis of the drag performances. The paper reported that Mara Spooner (AKA The Governorness) of the Ames Pride and Renegade Arts Collective was the hostess for the event. It said that Jaymee Sexton danced and lip-synched during the All-Ages Drag show, showing up in three different outfits. At least two performers were minors. “Smoky Moon,” for example, was identified as a middle-school student who had graduated from the library’s training for cross-dressing.

The library gained nationwide notoriety last year for hosting a summer camp to teach kids K–12 the art of cross-dressing and drag performances. The camp was supported by local LGBTQ activists, who said it was intended to make transgender children feel safe and to prevent suicide. The Ames Pride and Renegade Arts Collective provided content for the camp. Both Spooner and Rastogi were dismissive of parents’ concerns, suggesting that those who objected to the camp were free not to attend.

1
YouTuber with over 8 million followers exposes ‘dark side of birth control pill’
2
John-Henry Westen: Pope Francis is the chaplain of the New World Order
3
‘We own the science’: UN rep. admits partnering with Big Tech to censor ‘distorted information’
4
‘Brilliant’ new documentary exposes how Big Pharma and gov’t teamed up to push the COVID vaccines
5
Bp. Schneider: Pope’s ‘persecution’ of the Latin Mass an ‘abuse of power’ which must be resisted
Subscribe to Daily Headlines »