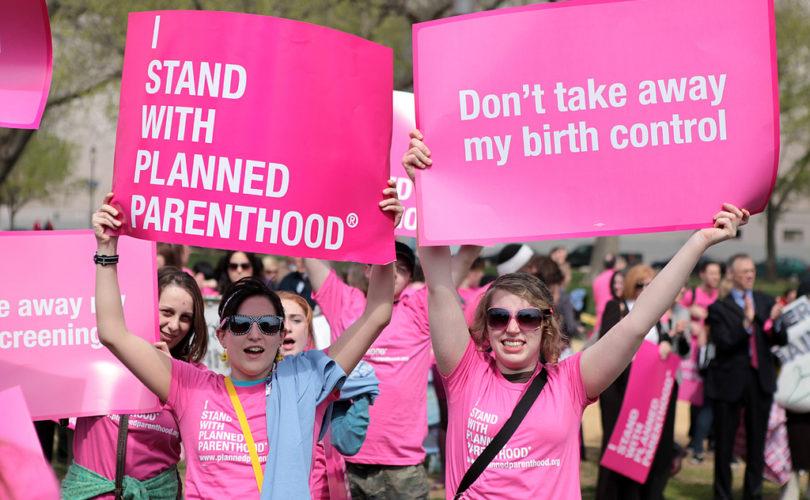 Since the release of undercover videos showing that Planned Parenthood traffics in aborted baby organs, Missouri State Senator Kurt Schaefer headed an investigation of the abortion giant. In hearings this month, revelations exposed several illegal activities of Planned Parenthood and its political and institutional allies.

Missouri Department of Health and Senior Services Director Gail Vasterling avoided answering senate questions and, in one instance, outright refused the senate an answer. Likewise, Missouri University made every effort to prevent the senate investigating committee from obtaining important information.

Why? Because, allegedly, the two institutions conspired to illegally secure a license for Columbia's Planned Parenthood facility to resume chemical abortions, even though the facility did not comply with basic state laws protecting the health of women.

On August 13, Vasterling refused to answer whether Planned Parenthood's newly hired abortionist, Colleen McNicholas, had hospital privileges in Columbia as required by law.

Schaefer accused Vasterling of “withholding information … from the people of the state of Missouri.” He ordered Vasterling to appear again at a hearing on August 25 or be held in contempt.

Vasterling sent Schaefer a letter on August 21, 2015, admitting that an ambulatory surgical center license was issued to the Columbia Planned Parenthood facility even though the facility was not in compliance with the law.

Instead of maintaining the required hospital privileges in Columbia, McNicholas had only limited “refer and follow” privileges with Missouri University Health Care – which doesn't even allow the abortionist to admit or care for patients.

Missouri law states that abortionists must be licensed to perform procedures at a nearby hospital, in order to consistently care for the many women who need additional procedures after an incomplete abortion.

Incomplete abortion is a common complication of chemical abortions. The National Abortion Federation reports that up to ten percent of all chemical abortions require surgery to stop hemorrhaging or to prevent infection from retained baby tissue.

“The abortionist is supposed to be able to provide surgical removal of retained tissue,” Operation Rescue president Troy Newman explained. “Without hospital privileges, abortionists are incapable of caring for women with incomplete abortions.”

“Laws were passed in Missouri to protect women from this very situation,” Newman concluded.  “It is a dereliction of duty for a health department official to so blatantly ignore the law in order to enable abortions at Planned Parenthood.”

In the hearings, Sen. Eric Schmitt argued that McNicholas should not be licensed at the Columbia Planned Parenthood because she doesn't have admitting and care privileges at a local hospital, nor does she even live in Columbia to provide life-saving care in case of complications.

Another state senator described the “refer and follow” agreement as “bogus non-privileges.”

Schmitt took issue with Vasterling, who defended McNicholas, telling the Department of Health head that legally, an abortionist “should be able to get [his patient] into a hospital.” Turning directly to Vasterling, Schmitt said, “And the fact that we've gotten to this point in this hearing where you're not willing to say that is troubling to me.”

Additionally, Senator Schaefer received a letter from R. Bowen Loftin, the chancellor at the University of Missouri, admitting that the university entered into a “refer and follow” agreement with McNicholas so as to allow her to be licensed. But this is illegal also, because Missouri University is a publicly funded institution, and state laws make it illegal for the such institutions to participate in abortion in any way.

“I want the university out of the abortion business,” Schaefer said.

Moreover, University of Missouri Assistant Professor Kristin Metcalf-Wilson recruited McNicholas to Planned Parenthood using a state-funded university computer during working hours, in violation of laws saying that no university funds may be used in any way for abortions.

Schaefer concluded that the university and the state Department of Health worked together to circumvent the law. “There is clearly a game going on here, and we're all getting really, really tired of it,” Schaefer said.

Things got heated when Chancellor Loftin admitted that “refer and follow” privileges do not fulfill the law but said that revoking the agreement might qualify as “discrimination.”

Schaefer rebuked Loftin by producing a three-inch stack of e-mails proving the university's involvement in “facilitating” abortions at Planned Parenthood.  “It appears to me that the university is in the abortion business,” Schaefer said.

The senate committee also sought to find out if baby organs from St. Louis's Planned Parenthood were being trafficked. The committee discovered that the pathology lab that receives the babies' remains, and sends copies of its reports to the Department of Health, was cited in 2013 for failing to report.

State senators then raised questions about what happened to those unreported baby organs. The committee asked for the name of the pathologist who received the abortion remains, but Vasterling and John Langston, a Department of Health and Senior Services manager, refused to answer.

Schaefer demanded the name before the end of the hearing, and finally, a third Department of Health employee complied. The committee resolved to call the manager to testify.

Planned Parenthood of Kansas and Mid-Missouri has become infamous for corruption.  In 2007, Johnson County District Attorney Phill Kline filed 107 criminal charges –including 23 felony counts – for illegal late-term abortions, and for manufacturing evidence to cover up crimes.

But the evidence against Planned Parenthood was illegally destroyed by someone in Attorney General Steven Six's office. As a result, the charges were dismissed.

No one has ever been held accountable for the destruction of evidence.

“The fact that Planned Parenthood of Kansas and Mid-Missouri would play fast and loose with the law is really a matter of habit for them,” Operation Rescue's Newman said. “This Planned Parenthood group has gotten away with breaking the law over and over again.”

“Hopefully, Missouri will help them break that bad habit and shut down abortion operations in Columbia for good,” Newman commented.

The next hearing has not yet been scheduled, but senators expect to question more Department of Health employees.

Doctors decided this baby’s life wasn’t worth saving. Now a Missouri legislator wants to make sure it never happens again.