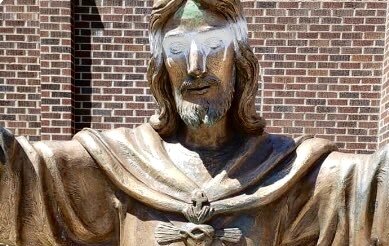 A vandalized statue of the Sacred Heart of Jesus in Calgary, AlbertaTwitter

CALGARY, Alberta, July 16, 2020 (LifeSiteNews) –  Vandals defaced a bronze statue of the Sacred Heart of Jesus outside of one of the oldest churches in the western Canadian city of Calgary earlier this week, violating the face of the statue with paint and the body with markings.

Vandals took aim at the face of the Sacred Heart of Jesus statue, covering the eyes with what appears to be white spray paint. Additionally, a green triangle was painted on the forehead of the statue, along with lettering on the body.

The incident happened early Tuesday morning at Sacred Heart parish, which is one of Calgary’s oldest Catholic churches.

LifeSiteNews reached out to the pastor of Sacred Heart, Fr. John Gannon, to inquire about the incident.

He replied by saying that the crime does not appear to be linked to similar attacks on churches taking place across North America.

Fr. Gannon told LifeSiteNews that they speculate the incident appears to have been done by two inebriated females, which they determined from security camera footage.

“We’ve checked our security footage and sent a report to police for their information, but we’ve concluded that it was an incident of inebriation and not tied to vandalism and protests in the U.S.,” Fr. Gannon told LifeSiteNews.

“We are sorry to see that church property was not respected.”

Fr. Gannon told LifeSiteNews that the statue was quickly cleaned.

LifeSiteNews also reached out to the Catholic Diocese of Calgary for more information on the incident.

Fr. Wilbert Chin Jon, Moderator of the Curia for the Diocese of Calgary, responded to LifeSiteNews with a statement from the diocese regarding the act of vandalism, which backed what Gannon told LifeSiteNews.

“An act of vandalism against the statue of the Sacred Heart of Jesus by the front doors of Sacred Heart Church in Calgary was caught on surveillance camera. This took place on Tuesday, July 14 at 1:29 a.m. This was committed by two young people using spray paint and possibly a marker or chalk,” said the statement.

“The incident has been reported to the police.”

The act of vandalism to the Sacred Heart statue in Calgary caught the attention of U.S. Catholic author and academic Dr. Taylor Marshall, who took to Twitter yesterday to decry the incident.

“More attacks on Christ!!! Where is the outcry?” wrote Marshall on Twitter.

Acts of vandalism to Catholic churches and public and private property have been increasing in recent weeks, especially in the United States.

Riots and violent protests began May 25 after George Floyd was killed at the hands of a Minneapolis police officer.

Over the weekend, several churches and statues in the United States were vandalized and torched, including a 250-year-old mission church founded by Saint Junípero Serra.

In May, vandals used power saws and grinders to behead Catholic bronze religious statues in broad daylight in a grotto in the Roman Catholic Diocese of Sault Ste. Marie in Ontario.

Stations of the Cross in Sudbury, Ontario, were vandalized just days before protests began in the United States.