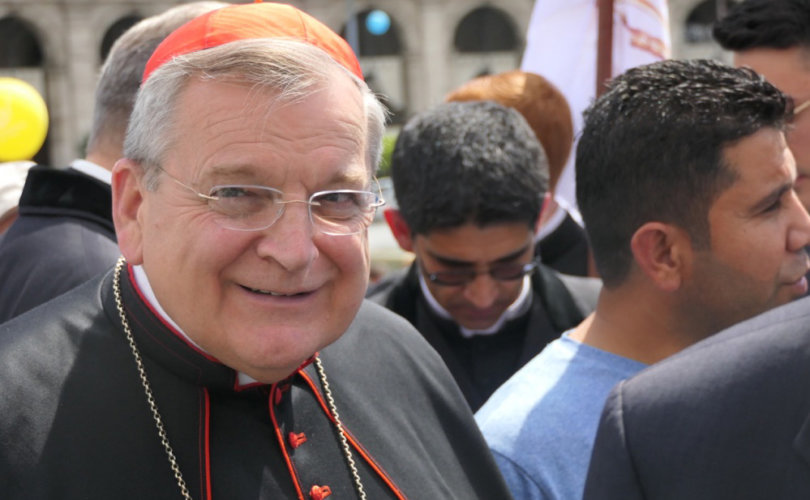 September 12, 2017 (LifeSiteNews) – The only way a Catholic priest can allow divorced and civilly remarried Catholics to receive Holy Communion is if they forgo sexual relations, Cardinal Raymond Burke reaffirmed.

Practicing sexual continence, as the Church requires in a new relationship when a marriage has not been annulled, properly recognizes that marriage, he said.

“The only case in which a priest could admit a person living in an irregular matrimonial union to receive the Sacraments of Penance and Holy Eucharist is the case of a couple who agree to live ‘as brother and sister,’” Cardinal Burke said, “that is to respect the marriage to which they are bound by not living in a marital way with another person.”

In a recent interview with the Hungarian independent Catholic news service Katolikus Válasz, the cardinal also clarified that the “internal forum” cannot be used to determine the nullity of a marriage.

The concept of the “internal forum” has been regularly bandied about since its use at the Synods on the Family preceding Pope Francis’ controversial apostolic exhortation Amoris Laetitia.

In discussions at the Synods and since then, it has been argued that the internal forum — private discussion with a confessor — could provide context where a penitent, presumably arguing his or her subjective culpability in their objectively sinful situation is limited, could be allowed to return to the sacraments.

The Hungarian outlet asked Cardinal Burke if there are cases where the internal forum can be used to legitimately recognize the invalidity of the first marriage and provide access to the sacraments.

“Such cases do not exist,” Cardinal Burke responded. “No priest has the authority to declare a marriage null in the internal forum.”

“Marriage is a public state in the Church, and the judgment regarding an accusation of nullity of marriage must be made in accord with the long practice of the Church,” he said. “If a college of judges in a matrimonial tribunal is not able to arrive at moral certitude regarding the nullity of a marriage after a careful and thorough examination of the petition of nullity, how can an individual priest be capable of making such a judgment having to do with the eternal salvation of the soul in question?”

Cardinal Burke is one of four cardinals who submitted five dubia to Pope Francis last year requesting clarification on certain parts of Amoris Laetitia, to confirm whether the exhortation followed the Catholic’s unchanging teaching on marriage.

Much of the confusion in the wake of the 2016 document’s release has stemmed from bishops in different parts of the world applying different interpretations of the exhortation. Where bishops in Canada and Poland have upheld that divorced and remarried Catholics in adultery may not receive Communion, bishops in Argentina, Malta, Germany, and Belgium have given the green light for Communion in these situations.

Two of the four dubia signers, Cardinals Carlo Caffarra and Joachim Meisner, have passed away in the last two months. Pope Francis has yet to give a direct response to the dubia.

Katolikus Válasz asked Cardinal Burke as well whether the idea of “discernment” was being misused to justify dissent and sin. The concept is frequently used in the process of justifying access to Communion for individuals living in objectively sinful scenarios.

Chicago Cardinal Blase Cupich said in a recent interview that Amoris Laetitia is a call for Catholics to graduate from “an adolescent spirituality into an adult spirituality” where they will be able to use their “freedom of conscience” to “discern truth” in their life.

Last fall, San Diego Bishop Robert McElroy encouraged priests in his diocese to publish a notice in their bulletins saying the Church will “assist those who are divorced and remarried and cannot receive an annulment to utilize the internal forum of conscience in order to discern if God is calling them to return to the Eucharist.”

Cardinal Burke clarified with Katolikus Válasz what discernment is and what it is not.

“Discernment means seeking to know the will of God in my life,” he said. “As such, it means studying carefully what God teaches us in the Church and applying it faithfully to my life.”

“Discernment does not decide what is right or wrong but leads the person to inform himself as fully as possible,” continued Cardinal Burke, “so that he can make a right judgment in a particular matter, that is, so that he can act in accord with the truth which God has written upon his heart or conscience.”

Cardinal Burke’s discussion with Katolikus Válasz was the second installment of a recent interview with the Hungarian outlet.

Queried about criticism from some for his use of rich liturgical vestments for Mass, Cardinal Burke said, “The vesting of the priest is, in fact, an act of ultimate humility for he allows himself to be covered with the signs that it is not he who is acting in the Sacred Liturgy but Christ is acting through him.”

Regarding whether a relaxation of mandatory priestly celibacy would be a good solution for the priest shortage in the West, the cardinal said no. “A priestly vocation is a response to a divine call which includes the grace of celibacy or perpetual continence.”

Asked to explain his vision of the Church, Cardinal Burke said it was for the Church and her members to “live ever more faithfully and generously in Christ, so that the glory of Christ may light up our world …”

“The world, despite appearances to the contrary, is hungering and thirsting for the truth and love which Christ alone brings to us,” said Cardinal Burke, “setting us free from sin and placing us in a right relationship with one another and our world.”

“By being faithful and generous to her true identity, as the Bride of Christ,” he said, “the Church brings to the world what the world most needs and desires.”