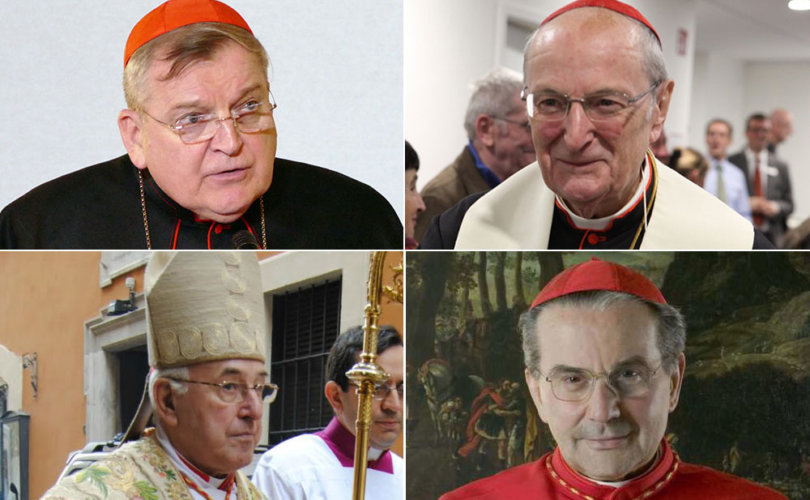 Update Dec. 1, 2016: The original source of Msgr. Pinto's quotes, Spanish news agency Religión Confidencial, now says they erred in reporting that he had said the pope could remove the four cardinals from the College of Cardinals over the dubia. In fact, they now report, after reviewing the tape again, it is clear that he said the pope would not remove their red hats. See the full story here.

MADRID, November 29, 2016 (LifeSiteNews) – While the dubia of four Cardinals concerning clarification of Amoris Laetitia spreads wider and wider ripples in the Vatican and worldwide, the dean of the Apostolic Tribunal of the Roman Rota, the highest appeals court of the Church, says that they risk losing their Cardinalate.

“The action of the Holy Spirit cannot be doubted,” he says. “[The Cardinals] question not one synod but two! The ordinary and the extraordinary,” Mons. Vito Pinto explained during a conference in the Ecclesiastical University of San Dámaso in Madrid, Spain.

The four Cardinals, Walter Brandmüller, Raymond Burke, Carlo Caffarra, and Joachim Meisner, asked Pope Francis for clarification on September 19, and then went public with their concerns earlier this month when Francis failed to answer.

“Which Church do these Cardinals defend?” Pinto reproaches. “The Pope is faithful to the doctrine of Christ.”

“What they have done is a very serious scandal that could lead the Holy Father to remove them from the Cardinalate, as it has sometimes happened in Church history,” Pinto expounds.

The Cardinalate – unlike the deaconate, priestly, or bishop’s ordination – does not entail an ontological change in the individual, but is an office conferred by the Pope. Therefore the Church speaks of “creating” Cardinals who join the College of Cardinals. They serve principally as helpers – in Latin, “hinges” (cardines) – to the Pope in ruling the Church. Therefore, they could theoretically be removed from their positions and return to being “simple” bishops or archbishops.

Mons. Vito Pinto affirms that the Pope has not directly answered their dubia but “indirectly he has told them that they only see in white or black, when in the Church there are shades of colors.” Pinto referred to multiple instances in which Pope Francis stated that life is not black and white but grey.

In the same conference, Mons. Pinto recalls, referring to Catholic “remarried” divorcees, how the center of Francis’ message is that the Church needs to accept the injured and fallen: “A nun told me that there are people divorced or living together who are communicating. And what should the Church do, say ‘yes, you may’ and ‘no, you may not’? Pope Francis wants a Church that is very close to the people.”

For Mons. Pinto the only solution – and the key to Francis’ pontificate – is acceptance, what he calls “mercy.” “In our time the Bride of Christ prefers to use the medicine of mercy and not wield the weapons of severity. The Catholic Church wishes to show herself to be a kind mother to all, patient and full of mercy to the children separated from her.”