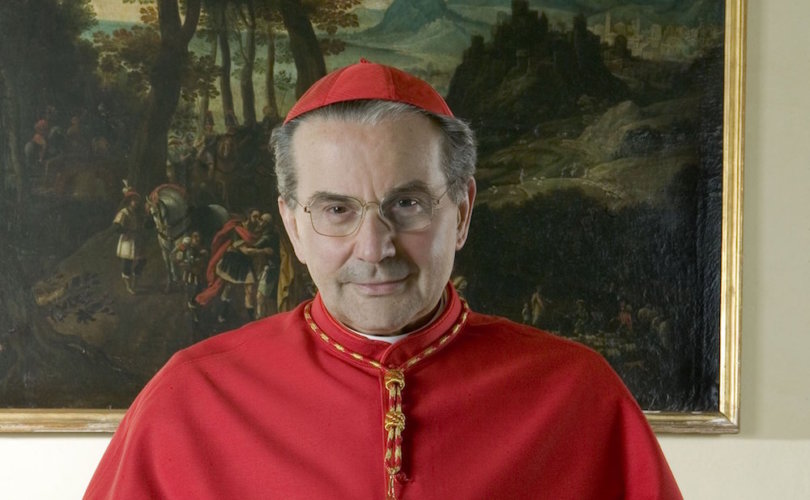 September 6, 2017 (LifeSiteNews) — Cardinal Carlo Caffarra, one of the four cardinals who sent Pope Francis the dubia asking for clarity on Amoris Laetitia, died at 79, the Vatican confirmed.

He is the second dubia cardinal to die in the last two months. German Cardinal Joachim Meisner died peacefully in his sleep in July, holding his breviary and preparing to offer Mass.

Cardinal Caffarra, former archbishop of Bologna, was tasked by Saint Pope John Paul II more than three decades ago with founding an institute to study marriage and the family. He has been a respected leader in reinvigorating the life and family movement within the Church.

Along with a doctorate in canon law, he was a specialist in moral theology. In his early priesthood he was a professor of moral theology to seminarians, giving special attention to the Church's doctrine on marriage and the ethics of procreation. He later taught medical ethics in Rome.

He was nominated an expert at the Synod of Bishops on Matrimony and the Family in 1980, and the following year, was appointed by John Paul II to as founder and president of the John Paul II Pontifical Institute for Studies on Marriage and the Family. From 1983-88 he held the position of Consultor of the Congregation for the Doctrine of the Faith.

The cardinal served as a member of the Congregation for the Causes of Saints, the Supreme Tribunal of the Apostolic Signatura, the Pontifical Council for the Family, and the Pontifical Academy for Life.

In 2008, Caffarra gave an interview in which he spoke about a letter he had received from the last Fatima seer, Sister Lucia dos Santos, concerning the final battle between God and Satan. When the cardinal wrote to Sister Lucia 36 years ago asking for her prayers as he began the process of founding the institute, he never expected a reply. Instead, the seer responded with a message of profound significance.

In [her letter] we find written: ‘The final battle between the Lord and the reign of Satan will be about marriage and the family. Don’t be afraid,’ she added, ‘because anyone who operates for the sanctity of marriage and the family will always be contended and opposed in every way, because this is the decisive issue.’ And then she concluded: ‘However, Our Lady has already crushed its head.’

In a 2010 doctrinal note issued in his Archdiocese of Bologna, he wrote that any Catholic who approves of same-sex “marriage” can no longer be considered Catholic.

He called the Pope’s exhortation Amoris Laetitia “objectively unclear,” noting how fellow bishops have conflicting interpretations of what it means.

Caffarra has been clear that where confusion arises in interpreting papal texts, one has to refer to the continuity of the Magisterium of the past as the principle guiding light. “In matters of Doctrine and Morals, the Magisterium cannot contradict itself,” he stated.

In May, the cardinal gave what might now be considered his battle plan for how the Church must engage in what he called the “final battle” between God and Satan.

Caffarra said in his presentation at the Rome Life Form on May 19 that there are two forces opposing one another in the battle. One is the “wounded Heart of the Crucified-Risen One” who calls all men to himself. The other is the “power of Satan, who does not want to be ousted from his kingdom.”

He said that Satan, in pushing the lies of abortion and homosexuality, is attempting to destroy the two most important pillars of creation, the “human person” created in the image of God and the “conjugal union” between a man and woman.

“The axiological elevation of abortion to a subjective right is the demolition of the first pillar. The ennoblement of a homosexual relationship, when equated to marriage, is the destruction of the second pillar,” Caffarra said.

Satan’s ultimate goal is to “build an actual anti-creation,” an “alternative creation,” where God and every sign of his beauty and goodness have been erased.

“This is the ultimate and terrible challenge which Satan is hurling at God,” the cardinal said.

To be a faithful follower of Christ in these times means to “testify…openly and publicly” to the truth of God’s creation with regard to the dignity of the human person and marriage.

“Someone who does not testify in this way is like a soldier who flees at the decisive moment in a battle. We are no longer witnesses, but deserters, if we do not speak openly and publicly,” he said.

In June, the Cardinal made public on behalf of the other dubia signers a letter to Pope Francis in which he unsuccessfully asked him for a private audience to discuss what he called the “confusion and disorientation” within the Church after the publication of Amoris Laetitia.

In the letter, the Cardinal laments the great division in the Church on basic morality as a result of the pope's exhortation.

“And so it is happening — how painful it is to see this! — that what is sin in Poland is good in Germany, that what is prohibited in the archdiocese of Philadelphia is permitted in Malta,” he wrote on behalf of all four.

He wrote that the four were still hoping that the Pope would “resolve uncertainties and to bring clarity on some points” of Amoris Laetitia as outlined in the dubia they delivered to the Pope and the Congregation for the Doctrine of the Faith last September.

Cardinal Raymond Burke outlined last month what the formal correction of Pope Francis would look like if the Pope continued to not respond to the five dubia.

“It seems to me that the essence of the correction is quite simple,” Burke explained to The Wanderer.

“The question is asked, ‘How would this be done?’ It is done very simply by a formal declaration to which the Holy Father would be obliged to respond. Cardinals Brandmüller, Caffarra, Meisner, and I used an ancient institution in the Church of proposing dubia to the Pope,” the Cardinal continued.

“This was done in a very respectful way and not in any way to be aggressive, in order to give him the occasion to set forth the Church’s unchanging teaching. Pope Francis has chosen not to respond to the five dubia, so it is now necessary simply to state what the Church teaches about marriage, the family, acts that are intrinsically evil, and so forth. These are the points that are not clear in the current teachings of the Roman Pontiff; therefore, this situation must be corrected. The correction would then direct itself principally to those doctrinal points,” he added.