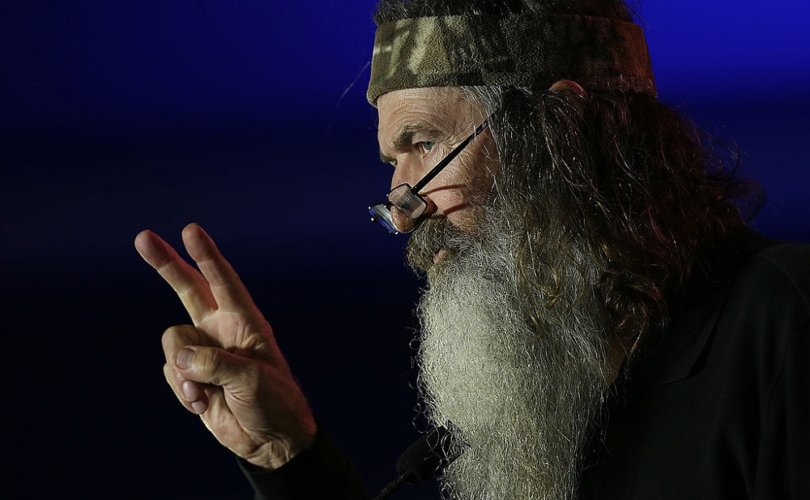 In an interview with Breitbart on August 5, Robertson discussed the Democratic Party’s link to satanism and its hatred of Christianity. Robertson, a conservative Christian, has consistently stood up to the mob and refused to back down from his beliefs.

“[Democrats] come along and say, ‘No, we want to make America hate again, and we’re going to show you how,’” he continued.  “[They] form a satanic mob with filthy minds, filthy mouths. The F-word is sprayed on everything they touch.”

He discussed how Democrats riot, loot, and burn, trying to get rid of Jesus, churches, and Trump. They “get rid of anything wherever anybody ever made a mistake, zero forgiveness for everybody that’s sinned — like they don’t — and you just look at them and they say, ‘Trust us. We will make America hate again.’”

“The most pathetic thing I have ever seen human beings display is this monster Donald Trump is now running against,” remarked Robertson.

Robertson identified the left’s embrace of Marxist ideological hatred of Christianity. “When they begin to burn Bibles — when they pile Bibles up on top of the American flag, the flag that represents their country, and they burn those — get ready, and get your ammo,” he warned. “Get all your gun stuff … because the battle is fixing to begin when they go down that road.

“They’ve exchanged Jesus Christ for Karl Marx. Karl Marx is … the one they’re going with. You would think human beings would learn better, but we’re not wrestling against flesh and blood; we’re wrestling against the spiritual forces of evil in the heavenly realms. Our struggle is with Satan. I view it from a spiritual lens,” he continued.

“If the United States of America votes for that dude and votes him … in, they deserve what they get,” he added, “and we’re fixing to have Hell on Earth. That’s exactly what’s going to happen with Joe Biden. Hell on Earth is coming if they vote for him, if we’re that far down.”

Earlier this year, Fr. Michael P. Orsi similarly said, “The devil has made his home among the leadership of the Democratic Party for some time now and found it a most hospitable environment.”

“This can be deduced from the fact that every prominent Democrat figure is totally committed to abortion — even partial-birth abortion and post-delivery abortion, which is to say infanticide,” Orsi continued. “What else but diabolical influence can explain their determination to block even the slightest impingement upon the murder of children?”

On the contrary, Robertson recalled that, when he met with Donald Trump, the two men “had a Bible between us” and “discussed spiritual matters.”

“The guy has a keenness and a quickness and an understanding in dealing with a situation. I’m telling you, for lack of a better word, Donald Trump is caustically brilliant,” he continued. “The man has a head on his shoulders. I’m telling you, in one word, I would say that he’s very shrewd, and he doesn’t want from fights.”