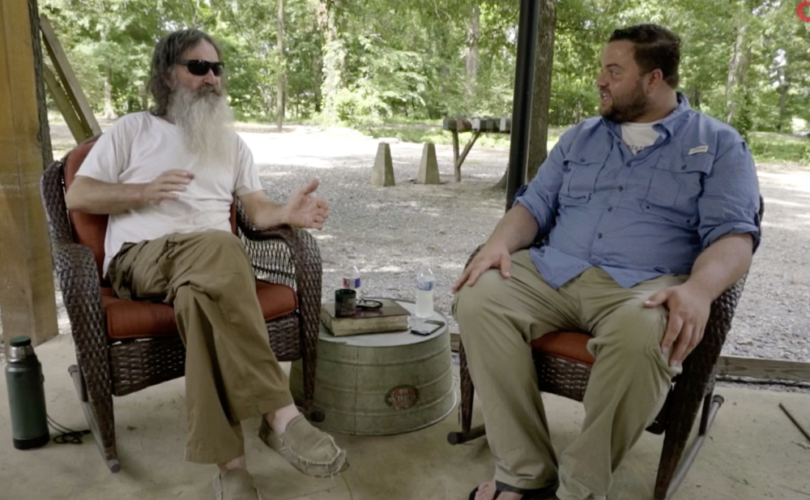 May 16, 2019, LifeSiteNews — As a growing band of courageous ex-gays and ex-transgenders from around the United States prepare to travel to Washington, D.C. for the second annual Freedom March later this month, founder Jeffrey McCall thanked Duck Dynasty’s Phil Robertson for encouraging him “to push through persecution.”

McCall had visited Robertson last summer to tell his story on Robertson’s In the Woods with Phil CRTV show.

During the video interview, McCall explained that when he turned away from his old life as “Scarlet” — a trans “woman” — and embraced his new life in Christ, he lost all his friends.

Robertson quickly assured McCall, “I am your brother.”

“Your brothers and sisters love you, they really do, and I do, too,” said Robertson. “You are to be commended for seeing the error of your ways, and turning to to God.”

“I am thankful and I am honored, Jeffrey, to call you my brother, a son of God,” added Robertson. “I love you, dude.”

As the two walked away from the set after the interview, Robertson warned McCall that he would undergo persecution and defamatory comments for proclaiming the freedom he had found in Christ.

“Even when people persecute you, keep going,” said Robertson, encouraging McCall. “What you are doing is ‘Kingdom work.’’’

McCall told LifeSiteNews that Robertson’s words meant a lot to him. “It was awesome to hear this coming from someone who has been out in the limelight who has also been persecuted for his beliefs.”

Proclaiming freedom in the Nation’s Capital

McCall is the driving force behind the Freedom March, first held in the nation’s capital last May.

The racially diverse group of mostly Millennials — formerly sexually active gays and lesbians as well as others who had lived as “transgenders” (assuming the identity of a member of the opposite sex) — has faced plenty of opposition after publicly proclaiming the freedom its members have found through Jesus Christ.

Most of the opposition has come from the secular press, progressive commentators, and LGBT groups, who are quick to dismiss these young men and women as promoting “conversion therapy.”

Because of this misperception, RightWingWatch, an organization that attempts to identify “hate groups,” recently targeted the upcoming Freedom March, categorizing its slate of speakers as “anti-gay” and “anti-LGBT.”

But their stories are not based on “reparative therapy,” so-called attempts to “pray the gay away,” or other efforts to change sexual orientation. The message they proclaim is about their conversion to Jesus Christ and the transformation that comes after embracing their new identities as adopted children of God.

These men and women who have found Christ accept the reality of their same-sex attractions or transgender impulses. But what makes them different from other same sex–attracted or transgender persons is that they seek their individual self-worth in Christ, not in their sexual appetites or in assuming the identity of a member of the opposite sex.

“I was living as a female,” McCall told a crowd in a LifeSiteNews video. He explained that when he was younger, he saw a psychiatrist and was about to begin a series of surgeries to make himself look more like a woman.

“One night I was secretly listening to a preacher in my apartment,” recalled McCall.  “I called out to the Lord and asked, ‘Will I ever live for you? … I’ve seen real people live for you … not just going to church; they have relationships with you, and they have peace and joy.”

“I had wanted to kill myself,” he said.  “I was spiritually bankrupt; I was destitute.” At that moment, McCall knew he “was being convicted by the Holy Spirit that there is so much more than [what] I had been a part of.”

“And so I took all my life as Scarlet and I went to a dumpster and threw it all away — the clothes, the hair, the make-up, the jewelry, the shoes, my whole identity — I threw it away to follow Jesus.”

As he recounted his story for Phil Robertson, McCall cautioned listeners not to make assumptions about transgender people they might encounter.

“You’ve got to be careful and meet everyone where they’re at,” said McCall. He said people who saw him dressed as a woman in those days would’ve had no idea he was secretly listening to a Gospel preacher on TV each night in the privacy of his home.

Outwardly, the change was imperceptible, but the preaching of the Gospel was “stirring” in his heart, slowly attracting him to Jesus Christ.

The second annual Freedom March on Saturday, May 25 in Washington, D.C. will begin with a rally at the Sylvan Theater located in the southeast corner of the Washington Monument grounds. The group will then march across the National Mall to the Ellipse in front of the White House.

Here’s how the growing group of former gays, lesbians, and transgender men and women describe their mission:

Freedom March is a diverse group of Christians who have been delivered from LGBTQ lifestyles. Our purpose is to connect, bridge, and equip. We accomplish this mission through connecting fellow overcomers, reaching out to the LGBTQ community in each city, and equipping the local church. We seek to bring hope of deliverance to the LGBTQ community and point them to Christ! We are passionate speakers, pastors, parents, worshippers, activists, and students young and old from all across the U.S.A. Freedom March is not about suppression. It's about FREEDOM.