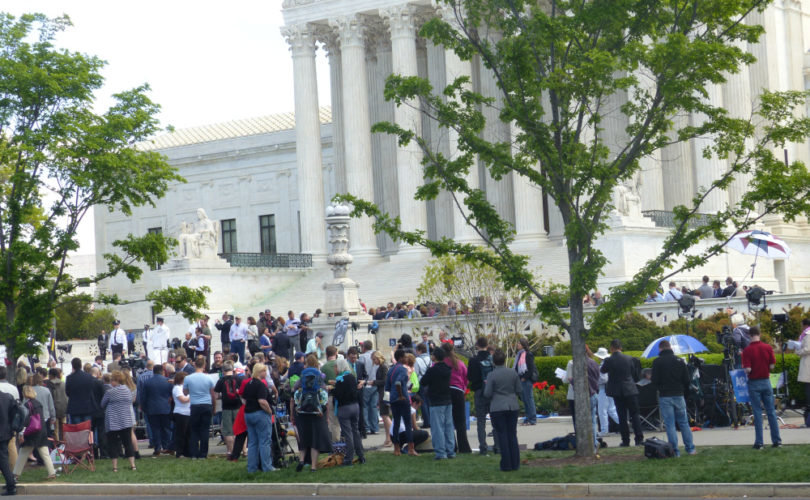 Activists gather at the Supreme Court on April 28, 2015, as the justices hear arguments in its same-sex "marriage" case.Dustin Siggins / LifeSiteNews

WASHINGTON, D.C., April 28, 2015 (LifeSiteNews.com) — As lawyers argued over marriage in front of the Supreme Court's nine justices, hundreds of protestors stood outside, crowding what is normally an open sidewalk for pedestrians.

Protestors were peaceful, as spirited debates and arguments punctuated opposing rallies held by pro-marriage allies and those supporting redefining marriage.

Despite being outnumbered at least 10 to 1, marriage supporters did not lack energy. Their rally included patriotic songs and chants, and enthusiastic speakers.

Several Republican members of Congress spoke at the pro-marriage rally, emphasizing that the Constitution does not say anything about same-sex “marriage.” Rep. Steve King of Iowa, who has introduced legislation to disallow the Supreme Court to hear same-sex “marriage”-related cases, received loud cheers from supporters even as opponents jeered. King, Rep. Jodi Hice of Georgia, Republican Study Committee Chairman Bill Flores of Texas, Rep. Tim Huelskamp of Kansas, and Rep. Louie Gohmert of Texas all spoke about the rights of states to control what marriage is for their citizens.

While several pastors spoke fervently about the relationship between God and marriage, and the relationship between marriage and the state of America, perhaps the most passionate of any speaker was Alliance Defending Freedom attorney Matthew Bowman. Following in the steps of other speakers in referring to Supreme Court cases where decisions caused harm to the nation — King referenced Dred Scott, which he said helped lead the nation to its Civil War — Bowman spoke of the deadly consequences of the Supreme Court's Roe v. Wade decision.

A spokesperson for NARAL told a news agency that her organization was at the rally to show support for “choice.”

In his remarks, Joe Backholm of the Family Policy Institute of Washington targeted the hypocrisy of the homosexual movement. Backholm highlighted how the anti-marriage rally organizers could legally deny service to the pro-marriage groups, but the reverse might be illegal.

Concerned Women for America's Penny Nance urged the Supreme Court to not make a sweeping decision, as it did in Roe. She called marriage “a basic pillar of civilization,” and told opponents, “I still love you, and I support your right to be here advocating your beliefs, too.”

Chelsen Vicari, the Evangelical Action Director of The Institute on Religion and Democracy, urged young supporters of marriage to “never lose your compassion, but never ever abandon your convictions.” She also said that “marriage does not need to be compromised; it needs to be cherished with courage.”

The rally in support of same-sex “marriage,” which took place just dozens of feet from the pro-marriage rally, featured many same-sex couples. The Gay Men's Chorus sang the National Anthem, which caused activists on both sides to mostly cease rallying.

The rallies ran from approximately 10:00 until 12:30, at which point lawyers from both sides made remarks on what had transpired inside the courtroom. The hearing itself can be heard in full here.