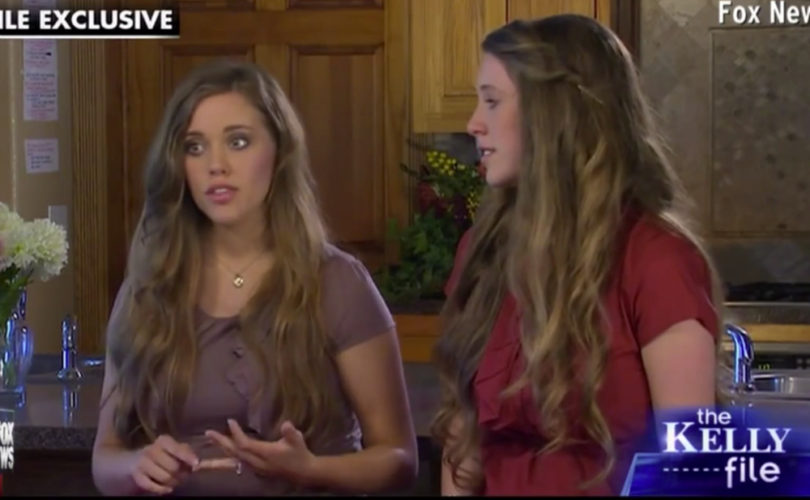 June 4, 2015 (LifeSiteNews) – Last night, Fox News' Megyn Kelly interviewed Jim Bob and Michelle Duggar about the sexual abuse committed by their eldest child, Josh, when he was a young teen. On Friday, in a similar interview, Kelly will speak with two of Josh's victims – his sisters Jill and Jessa.

A preview of the second interview has been released by Fox. In it, Jill told Kelly that “we are victims, they can't do this to us.” It is not clear which “they” Jill is addressing, though it appears she is talking about the illegal release of Josh's juvenile records and the media reaction to the information's release.

Jessa seemed to confirm this interpretation, saying, “The system that was set up to protect kids, both those who make stupid mistakes or have problems like this in their life and the ones that are affected by those choices. It’s greatly failed.”

According to Buzzfeed, Jessa said that Josh's actions were “very wrong,” but that “I do want to speak up in his defense against people who are calling him a child molester or a pedophile or a rapist, some people are saying.”

“…[T]hat is so overboard and a lie really, I mean people get mad at me for saying that but I can say this because I was one of the victims.”

In their interview with Kelly, Jim Bob and Michelle said Josh had fondled or otherwise touched four of his sisters, as well as a family babysitter. The actions took place when Josh was 14 and 15 years old. They only found out about the incidents, they said, because Josh himself voluntarily approached them and confessed what he had done.

They also said that most of the girls didn't know that Josh had touched them inappropriately until the parents told them, since most of the incidents had taken place when the girls were sleeping, and the touching was over their clothes.

Jessa would have been about nine at the time.

In their interview with Kelly, the Duggar parents said they are considering a lawsuit against the city of Springdale, Arkansas and its police chief for illegally releasing Josh's records last month.

“I wonder why all this press isn't going after the system for releasing the records,” said Jim Bob during last night's interview, noting the illegality of the release of Josh's record. “We trusted the police department,” said Michelle. “Our children poured out their hearts.”

“And then to have their trust betrayed. … To have those things twisted and shared in a slanderous way — story after story, tabloid after tabloid – as a mom, that breaks my heart for my girls.”

“They've been victimized more by what has happened in these last couple weeks than they were 12 years ago,” because they were not even aware of what Josh had done in 2002 and 2003, said Michelle.

“We have not been keeping secrets. We have been protecting people who…should be protected,” said Michelle, who criticized people “for targeting the family for profit.”

Media sources have often misportrayed how the family handled Josh's abuse. In writing about the Fox News preview of Jill's and Jessa's interview, The New York Post's Emily Smith wrote that “Josh confessed to molesting young girls three times before his parents bothered to do anything about it.” However, Jim Bob and Michelle told Kelly that after Josh admitted his actions the first time, at 14, they punished him and attempted to make sure he was under close supervision, while putting in place safeguards to prevent further abuse.

It was more than a year later, when Josh confessed that he had touched a sister under the age of 10 – his third confession of intra-family sexual abuse – that the Duggars went to outside counselors and the police.

The Duggars also revealed in Thursday nights interview that all of the girls who were victims, as well as Josh, received therapy from professional, licensed counselors. Josh, they said, paid for his own counseling.

Mike Huckabee affirms his support for Duggar family amid firestorm