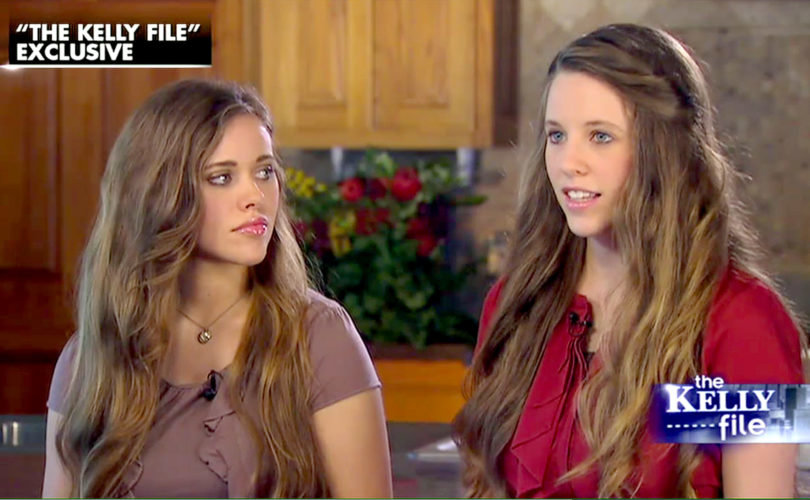 June 9, 2015 (LifeSiteNews) — Two of Josh Duggar’s sisters named among the victims in the 12-year-old abuse allegations against him call the portrayal of the situation distorted and untrue, and the release of their identities exploitive and malicious.

“It's not the truth, first of all,” Jill Duggar Dillard said. “Everything was distorted.”

Dillard and her sister Jessa Duggar Seewald spoke out in their Fox News interview last week, they said, because they wanted to set the record straight.

“So now that it's already been warped and told however they want to portray it,” said Dillard, “then we felt like that's why Jessa and I wanted to come out and just say, that's not what happened.”

Asked to name the most difficult part of all of this, Seewald said, “The past two weeks have been a thousand times worse for us,” than the abuse itself.

While she doesn’t at all excuse what her brother did, Seewald insists the situation has been twisted greatly, and she has the right to say so as one of the victims.

“I think in the case of what Josh did, it was very wrong. I'm not going to justify anything he did or say it was okay,” she stated. “Not permissible. But I do want to speak up in his defense against people who are calling him a child molester or a pedophile or a rapist, some people are saying. That is so overboard and a lie, really.”

The women contend because they were minors at the time, they and their brother never should have been named by authorities or the tabloid that published their identities.

“I feel like in this situation, we're again helpless as to the people handing over this report and then the tabloids taking that and – and printing that, sensationalizing it and really using it for their own profit,” Seewald said.

The women also don’t discount the likelihood their family’s outward Christian identity is part of why the story has been overblown and exploited.

“I definitely feel like people that – that already don't really like our family would be the ones to really spread this around and maliciously do so, slanderously do so,” she stated. “Definitely, they didn't have the victims in mind.”

When word broke last month of the allegations that Josh Duggar inappropriately touched several girls 12 years ago when he was 14, he resigned from his position at the Family Research Council. Four of the victims were sisters and the fifth a girl visiting the home.

Duggar confessed to his parents, Jim Bob and Michelle Duggar, of television’s “19 Kids and Counting,” that he’d touched two of the girls on the outside of their clothing while they were asleep. His parents first addressed it at home with punishment and by closely monitoring him.

But the Duggars later pulled their son from the home and sent him to a work camp after he confessed again that he was still struggling and there had been additional touching, more victims and some contact had moved to underneath clothing.

Josh Duggar received counseling both at the work camp and afterward, paying for it himself, and as part of the process, his parents took him to make a report with the Arkansas State Police.

Because the contact was subtle in nature and occurring as victims slept, the girls weren’t aware it had taken place until their parents told them.

Despite being confident their son was no longer a threat to their other children after he had been treated and returned home, the Duggars left safeguards they’d instituted in place, and worked on healing within the family.

Seewald and Dillard, now 22 and 24 respectively, are defending their parents’ handling of the matter, and also their brother’s conduct once he came forward.

“As a mother now, I look back and I think, you know, my parents did such an amazing job,” Dillard stated. “For me, even when we went through the DHS investigation, they complimented my parents on what an amazing job they did through that process.”

“And, you know, they sent Josh away. They got to get help,” said Seewald. “When he came back, he was a totally different person, like totally different. He was repentant whenever he'd left.”

The women do not give their brother a pass for his actions as a young teen. Dillard said she was torn between shock and sadness when she learned what her he’d done. “I'm sad because this is my older brother who I love a lot,” she said. “And so it's like, you know, they're conflicting there.”

Her sister’s initial reaction was to get mad. “You know, I was angry at first,” Seewald said. “I was like, how could this happen?”

But Josh got help, repented, and asked her to forgive him. “My parents explained to us what happened and then Josh came and asked each of us individually I know, but he asked me to forgive him,” said Seewald. “And I had to make that choice to forgive him, you know. And it wasn't something that somebody forced.”

Seewald said her brother was a young boy in the midst of puberty who got into trouble because he was too curious about girls. “And he made some bad choices,” she said, “but really the extent of it was mild inappropriate touching on fully clothed victims.”

The family had worked through what happened and moved on, five years later becoming the subject of their popular TV program following their large, close Christian family.

So when the news came that the abuse would be brought back up in public, they were angry, because the children involved had been assured in the investigation their privacy would be maintained.

“Whenever I heard the police reports had been released, that I said what — like they didn't have the right to do this,” said Dillard. “We're victims. They can't do this to us.”

“A system that was set up to protect kids, both those who make stupid mistakes or have problems like this in their lives and the ones that are affected by those choices, it's just — it's greatly failed,” Seewald said. “Well, and the Freedom of Information Act is not — you can't FOIA a juvenile case, everybody knows that.”

“I see it as a re-victimization that's even a thousand times worse,” said Dillard. “Because this is something that was already dealt with. We've already forgiven Josh, we've already moved on.”

Now that’s been drudged back up and used to denounce their whole family, the women were compelled to come forward.

“You know, we didn't choose to come out and tell our story,” said Dillard. “This wouldn't have been our first choice.”

Duggar sisters: Josh is not a pedophile, system ‘failed’ by releasing his records