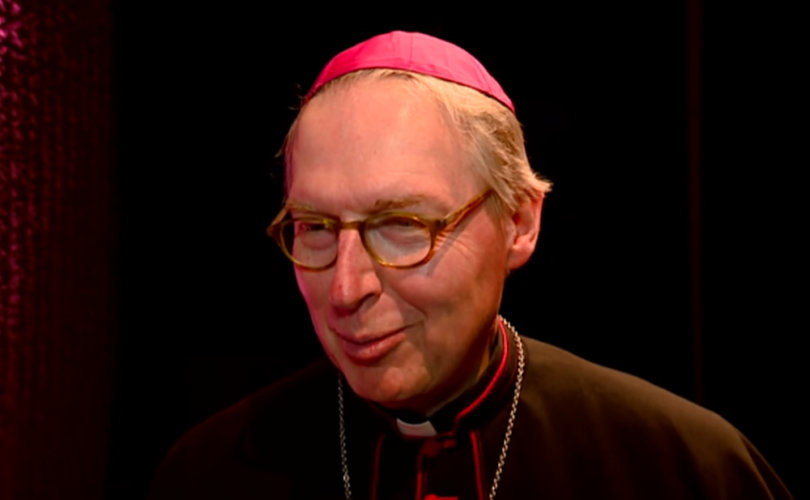 June 19, 2017 (LifeSiteNews) – There will be no Gay Pride “Pink Saturday” celebration on June 24 in the cathedral of ’s-Hertogenbosch in the Netherlands after Bishop Gerard de Korte backpedaled amid heavy pressure from a large section of his clergy and a number of local Catholics.

De Korte had not only given permission for the Gay Pride festivities to open with an ecumenical prayer in the medieval Saint-John’s Cathedral, he had committed to join the event and say a few words before giving a final blessing to  those present.

On Thursday, he made public his decision not to participate. The ecumenical service will take place instead in the main protestant Church in Den Bosch, as the town is colloquially known. The “Grote Kerk” is a massive brick structure built in 1821 in capital of the predominantly Catholic province of North Brabant.

De Korte’s backing down is not an acknowledgment of the scandalous nature of his decision to welcome a “Pink Saturday” in his bishopric. He spoke of “sleepless nights” and a sense of “failure” for not having been able to convince priests and members of his flock that his intentions were pure. He believes that welcoming all people, whatever their “sexual orientation,” is necessary in order to seek and maintain “dialogue” with the dominant culture, however “difficult” that is in practice.

But the bishop’s decision made it possible to avoid a major scandal in a Catholic church where Jesus, the Son of God, is truly present in the tabernacle under the appearance of the consecrated host.

Everything has not returned to normal, however. While Bishop de Korte talks of having gone through “one of the most difficult times” of his life, the Cathedral’s parish priest, Geertjan van Rossum, will go ahead with the bishop's approval and take part in the ecumenical service. It will be held with three Protestant pastors, two of whom are women, in coordination with the 10 Christian denominations that will participate. The fundamental problem – that such a ceremony appears to condone homosexual and LGBTQ lifestyles – appears not to have occurred to him or to his bishop.

In his letter dated June 15 explaining why the bishop did not go ahead with his plan, he openly regrets that his “nuanced” explanations were “unfortunately” not understood by a large number of faithful. “Homosexuality remains an exposed nerve,” he wrote, adding that he is obliged to observe that the affair has “hurt the religious feelings of many Catholics” because the cathedral is “the symbol of our diocese and they cannot believe that the serenity of the celebration is guaranteed.”

“I may not hurt the conscience of the faithful nor may I scandalize my brothers and sisters,” he writes, thus placing the affair on the subjective plane of their sentimentalities instead of the objective field that “Pink Saturday” openly aims to claim recognition and rights for the homosexual lifestyle.

De Korte speaks of the “ruckus” surrounding his planned welcoming of self-asserted gays and lesbians. “It is such that good relations within the community of the faithful are in jeopardy,” he wrote. “For the good of unity within the diocese, I am of the meaning that I can not do otherwise” than back down.

The bishop did repeat that in his view “dialogue between our Church and the homosexual community” should continue. “The dominant secular culture is at loggerheads with Catholicism as regards the proper living out of sexuality in general and homosexuality in particular. The Catholic faithful breathe in the modern culture and are profoundly influenced by it,” he said, adding that this often leads to “incomprehension, anger and sadness,” insisting that all, “whatsoever their orientation,” should find “cordiality, security and friendship” in the Church. “Every human being is welcome in our believing community.”

But that is only confusing the issue. The question is not of openness to individuals who are all called to eternal salvation and happiness. The issue is condoning or appearing to condone deeply disordered life choices that are being touted as normal and good in the context of provocative events flaunting vulgarity and vice in the way “Gay Pride” has been imposed over the years in any number of traditionally Christian towns and capitals.

The bishop’s letter subtly berates Catholics who do not understand what he is trying to do. In a previous letter after the upheaval created by his now reversed decision, Bishop de Korte wrote on Pentecost Sunday that he had met his new presbyteral council on June 1 and spoken about the event. He was asked to “clarify” his intentions. In this letter, he explained that Father van Rossum had not made his decision to welcome “Pink Saturday” crowd lightly and that he had his bishop’s full support “under the condition that during the prayer service, nothing would be said that goes against the teachings of our Church.”

“I have complete confidence that the celebration will take place in all serenity,” he wrote in his first letter. “Hopefully those present during the prayer service will be encouraged and strengthened in their belief that God loves us unconditionally in Christ.”

Of course, asking that nothing be said “against the teachings” of the Church was the least he could do. But silence is also a form of abdication from the truth and it is difficult to understand how a bishop, whose particular mission is to teach the faithful, can imagine that opening his cathedral doors to participants in a gay event – and blessing them as such – is not a way of justifying their acts and claims.

In the first letter, De Korte also wrote: “Probably things will be happening in town of which Catholics and other Christians, including believing homosexuals, gravely disapprove. As regards to this, I remember a levelheaded remark by one of our priests during the meeting of the presbyteral council on June 1. He pointed to the religious celebrations that take place in our diocese during Carnival. During those days, things happen that are difficult to align with Catholic ethics. But that is no reason to stop celebrating those Carnival services.”

This is in fact a sore point because a number of those celebrations in North-Brabant have appeared as deeply unfitting in Catholic churches. But in any case, the Carnival festivities do not claim rights for grave sin as such.

It should be said that the bishop wrote in his first letter that the only “orderly” way of living out one’s sexuality is in “marriage, as a lifelong covenant between a man and a woman. (…) Other forms of living out sexuality are disordered. As a Roman Catholic bishop, I am called to uphold this teaching,” he said, seemingly putting homosexual “counter-natural” acts on the same plane as extramarital sex.

But in the same way as Amoris Laetitia, De Korte makes a distinction that leads to the separation between doctrine and pastoral care:

“Every bishop as well as every priest is not only a teacher but also a shepherd. He knows of the tension between teachings and living, especially in the field of sexuality. The ecclesiastical ideal and unruly reality regularly collide. Not using Church teachings as a stick with which to beat but as a staff to accompany is a part of pastoral wisdom.”

The problem is, shepherds are not expected to “go along.” They should lead.

The bishop also recalls the old saying of the Church: “A lion in the pulpit; in the confessional a lamb,” adding that priests should help each faithful find “a way he can walk.” “Seldom will the church norms be attained in concrete existence. In that situation, we are not called upon to throw stones. Because if God is going to count sins, then who could stand? In God, there is forgiveness, and that is what gives us life.”

The arguments are precisely those of modernism, which oppose mercy and justice and shies from naming grave sin in order to be “inclusive.” While De Korte did go on to underscore the Church’s requirement that homosexuals live in continence – adding that they can only achieve this with support and “friendship from others and from God” – he finished his letter saying that in the last resort all should live according to their own conscience. The whole point of these conflicts is that the Church is reaching out to people who are openly contradicting her doctrine in a way that suggests that they are right to do so. Bishop de Korte has not backed down from this viewpoint.

In an interview with a local radio, Bishop de Korte explained that he reversed his decision because he had received “dozens” of protest letters for two weeks, including those of a sizable fraction from priests and deacons and that he cannot create division with his “close collaborators.” He said it was important to maintain his “connection” with them “because he is a bishop of the year 2017, not a dictator;” even if that is not in itself more important than his connection with the homosexual community, he said. “But it now appears to me that a celebration coupled with an event such as ‘Pink Saturday’ is considered by a number of our faithful as a bridge too far” – “unfortunately,” he added. He also said he understood that homosexuals want to find a “place” and “a bit of happiness in their lives.”

Father Antoine Bodar, a former university professor and former parish priest of the Saint-John’s cathedral in Den Bosch who is well known for his traditional mindset, was one of the local priests who openly criticized De Korte’s first decision. He wryly remarked, “On June 24, the yearly so-called ‘Pink Saturday’ will take place in ’s-Hertogenbosch. But why is there still a ‘Pink Saturday,’ why is there still a Gay Pride in Amsterdam? Whoever dares openly not to find homosexuality ordinary and normal can count on a metaphorical stoning. Homosexuality is not only the holy cow of our fatherland but also the golden calf. Therefore, these demonstrations, which seldom can take place without exhibitionism, are outdated, superfluous and old-fashioned.”

That also explains why Bishop de Korte’s careful remarks, in which he blames his decision not to host and bless a “Pink Saturday” on the more “orthodox” sections of his flock, have been ill received in the Dutch press and on social media.