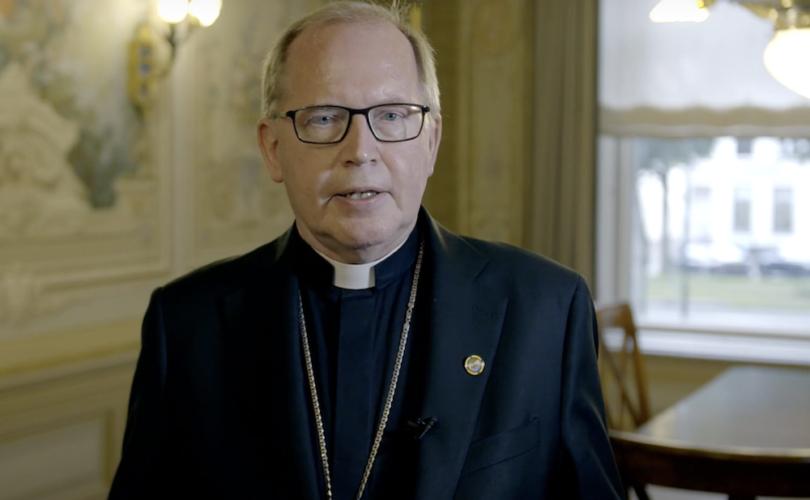 UTRECHT, Netherlands (LifeSiteNews) – The Cardinal Archbishop of Utrecht, Willem Eijk, has called for the Flemish bishops of Belgium to be corrected by ecclesiastical authorities for their departure from the Church’s moral and sacramental discipline with their publication of a “rite of blessing” for same-sex couples.

The Flemish bishops’ document, with its proposed liturgical “blessing” for same-sex couples, was issued on September 20, shortly after the German bishops approved documents of their Synodal Way insisting on acceptance of homosexual unions by the Church.

Cardinal Eijk of Utrecht strongly objected to the so-called rite of blessing, pointing out several reasons it must be rejected and the bishops responsible publicly corrected. Although the “blessing” does not claim the status of equality with the sacrament of marriage, the cardinal drew attention to the fact that it nonetheless clearly models itself on the rite of marriage.

“The declaration prayer,” Eijk said, “in which same-sex couples commit to each other shows an unequivocal analogy with the ‘I do’ that a man and a woman say to each other during the marriage ceremony.”

However, as is obvious to Catholics who adhere to the Church’s teaching on the sinfulness of homosexual acts and the inherent disorder of homosexual inclinations, such “commitment to each other” on the part of same-sex couples would constitute grave public sin and stand contrary to the natural order of human sexuality established by God, an order founded upon the sexual complementarity of man and woman for the sake of procreation. Therefore, as the cardinal insists, such a commitment by same-sex couples cannot be blessed by God or the Church.

“Blessing does not only presuppose a good intention on the part of the recipient,” Eijk declared. “What is blessed must also correspond to God’s order of creation. God created marriage as a total and mutual gift of man and woman to each other, culminating in procreation (Gaudium et spes, no. 48; cf. no. 50). Sexual relations between persons of the same sex cannot in themselves lead to procreation. They cannot therefore be an authentic expression at the bodily level of the total mutual self-giving of man and woman, which marriage is essentially.”

Reiterating what the Congregation for the Doctrine of the Faith declared on Feb 22, 2021, regarding the “blessing” of same-sex unions, the cardinal emphasized, “Situations that are objectively wrong from a moral point of view cannot be blessed. God’s grace does not shine on the path of sin. One cannot cultivate spiritual fruit by blessing relationships that go against God’s order of creation (ibid.). This, of course, does not prevent homosexual individuals from receiving a blessing. However, it is not morally permissible to bless the homosexual relationship as such.”

Pointing out the inherent contradictions of a prayer that invokes God’s blessing on acts and relationships that God Himself has revealed to be sinful, Eijk continued, “In the sample prayer, the gay couple says: ‘By your Word we want to live.’ But the Word of God contained in Scripture unequivocally and undeniably qualifies homosexual relationships as a sin.”

The cardinal then underscored the logic by which such blessings are bound to be made a precedent for liturgical blessings for those living in fornication or adultery. “If gay couples,” he said, “in monogamous, lasting sexual relationships can receive a blessing, should not the same be possible in the monogamous, lasting sexual relationships of a man and a woman living together without being married?”

Indeed, given the open push by the German bishops for just such blessings, it is not unreasonable to expect this line of reasoning to gain standing among prelates and clerics desiring to see the Church change her teaching on sexual morality.

In opposition to such wholesale capitulation on the part of bishops to the LGBT agenda of the world, Cardinal Eijk called on the competent ecclesiastical authorities in Rome to correct the Flemish bishops and require then to withdraw their statement.

“The statement of the Flemish bishops,” he declared, “in which they allow the blessing of same-sex couples and even provide a liturgical model for it, meets with inherent ethical objections, radically contradicts a recent ruling by the Congregation for the Doctrine of the Faith, and carries the risk that it may lead Catholics to views on the morality of same-sex relationships that are contrary to Church teaching. Catholics who accept the Church’s teaching, including on sexual morality, therefore fervently hope that the Flemish bishops will soon be asked by ecclesiastically competent circles to withdraw their statement and that the latter will comply.”

Cardinal Eijk is one of now several cardinals and bishops to publicly denounce the Flemish bishops for their rite of blessing. Others outspoken prelates include Cardinal Gerhard Müller, former Prefect of the Congregation for the Doctrine of the Faith, Cardinal Francis Arinze, former Prefect of the Congregation for Divine Worship, and Archbishop Carlo Maria Viganò. Rome has yet to address the crisis.

Priest: Biden and Pelosi make a ‘mockery’ of the Blessed Sacrament by receiving Communion