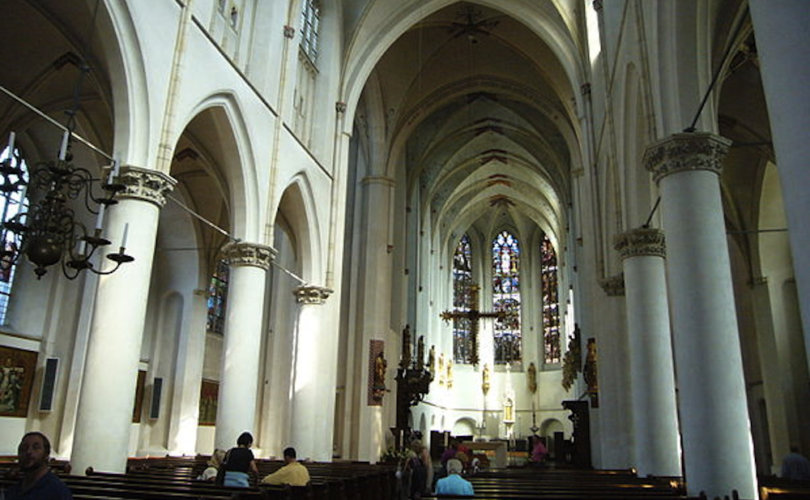 November 30, 2016 (LifeSiteNews) – Dutch Catholics are raising alarm bells after the bishops of the Netherlands and Belgium changed the words to the Our Father in a way that they believe amounts to an “ideological reinterpretation of the text.”

Dutch Catholics who still attend weekly Mass heard a newly-worded Our Father last Sunday that no longer asked God the Father, as Jesus taught, “to lead us not into temptation” but, instead, “not into trial.”

Vox Populi, an orthodox Catholic lay group, is organizing a petition advocating the traditional translation. “Why would this ‘reform’ be necessary now? There is not a single pastoral need to come up with a ‘new common Dutch-Flemish translation’ of the ‘Our Father.’”

Recent Dutch Catholic history is so marked by destructive innovation that in 1996 one faithful scholar declared the situation had long passed the “crisis” phase and achieved “ruin.”

The former translation of the Latin “temptationem” was “bekoring,” or “temptation.” The new version replaces that with “beproeving,” which means in English, “test,” “ordeal,” or “tribulation.”

Dutch pro-life leader Hugo Bos said the switch is “a bad thing,” but is “consistent with a tendency of the bishops to ignore sin and the temptation to sin.”

Indeed, it is the latest in a trend established by the 1965 “Dutch Catechism,” which systematically stripped the supernatural from Church teachings  in “the spirit of Vatican II.” No church embraced this “spirit,” and its desire to bring the Church into a positive encounter (“aggiornamento”) with popular culture more than the Dutch.

Vox Populi warns, however, that this latest “initiative of the Belgian and Dutch bishops will only add to the confusion within the Church and thereby increase the crisis of faith.” Going back to the Greek version of the Our Father, which uses “peirasmos,” the critics of the translation admit that theoretically it “can be translated as either ‘trial’ or ‘temptation.’ However, within the context of the 'Our Father,' ‘peirasmos’ cannot be translated as ‘trial.’”

Vox Populi points out that the Catechism of the Catholic Church makes it crystal clear that the phrase is intended by Jesus Christ as a plea for help in resisting the temptation to sin, not a request for God to avert pain and material suffering. Sections 2846, 2847 and 2848 of the Catechism focus on moral temptation.  Vox Populi illustrates the difference with a picture of a comely woman labeled “temptatio” and of a forlorn and wasted Job-like male figure captioned “probatio.”

The mistranslation will surprise no one who has observed the steady liberalization of the Dutch church. As reported in a 1996 presentation by J.P.M. van der Ploeg, a professor of Old Testament Studies at the Catholic University at Nijmegen, its first outward manifestation came with the Dutch Catechism, which, he said, simply removed the supernatural element from the Church. God was manifest not in sacraments, not in the Eucharist, but simply in good deeds.

The Holy Mass became “the service,” the “priest” became “the one who presides at the service,” and Baptism was simply the signifier of membership rather than the sacrament where God filled the child with supernatural grace.

Rome ordered a revision that the Dutch bishops defied. In the spirit of disobedience that followed, “priests, influenced by Modernism, began to teach the faithful that many things which they had hitherto been taught were not true. The stories of Adam and Eve in Paradise, of Original Sin, the Flood, Noah and his animals in the ark, the passing of Israel through the Red Sea, were said to have no historical foundation.”

A new Biblical translation followed in colloquial language that was necessitated, said its translators, by recent and rapid changes in the Dutch language. These were bogus, said Fr. van der Ploeg. The new translation’s introduction flatly denied the historicity of the first three books of the Old Testament.

“The moral teaching of the Church was said to be antiquated and not relevant to the needs of modern man. The bombardment was continuous. For many people, it had always been difficult to be chaste in all the circumstances of life; now it was claimed that God did not require chastity.” Concluded Fr. van der Ploeg: “All these things taken together contributed to the development of the present situation — no longer one of crisis, but of ruin.”

That ruin was manifested by 2013 in the systematic closure of churches. As reported three years ago by LifeSiteNews, “600-700 Catholic churches in the Netherlands will be decommissioned by 2018.”  In the same story, Dutch Cardinal Willem Jacobus Eĳk recalled that 90 percent of Catholics attended Sunday Mass before Vatican II. But now, it was just 6 percent.

Enough is enough, says Vox Populi. “The truth is that we are not dealing with a newer or better ‘translation’ here, but rather an ideological reinterpretation of the text. Therefore, Vox Populi calls upon the Episcopal Conferences of Belgium and the Netherlands to abandon this experiment doomed to failure with the ‘Our Father’ and to maintain the existing situation.”