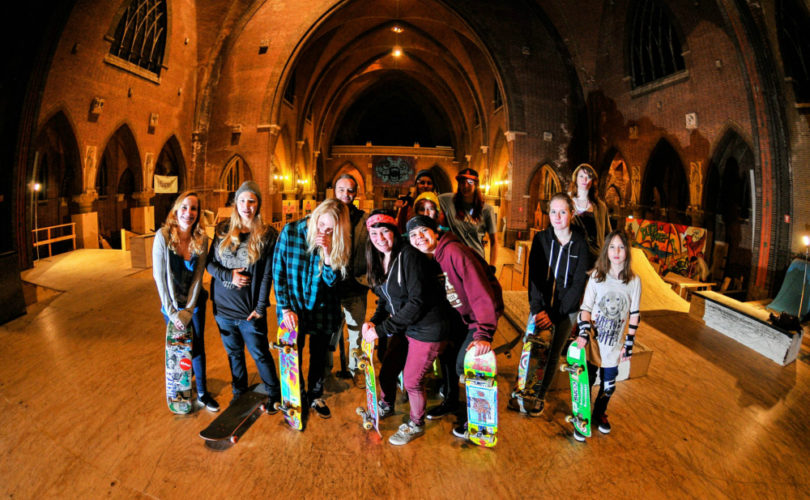 One former Dutch Catholic church is now being used as a skateboard park.http://skatehalarnhem.nl

ROME, April 14, 2015 (LifeSiteNews.com) – Catholics in the Netherlands are “embracing the vision of a future without churches,” Vatican Radio reported recently.

The devastating reality stems from “mistakes made by the local [national] Church after the [Second Vatican] Council and the actual abandonment of evangelization,” according to the report.

The head of the Catholic bishops’ conference of the Netherlands issued his Lenten message to the nation’s remaining Catholics, warning them against “bitterness” at the almost total loss of their Church. Cardinal Willem Eijk, archbishop of Utrecht, told the faithful in his message for Lent this year to prepare for the closure of about a thousand Catholic parishes, or about 2/3 of those in the country.

In his message, the cardinal said that no parish was closed from a decree by the diocese, but only after the numbers of parishioners had dwindled to the point where the operation of the parish was no longer possible. Vatican Radio reported that these closures were always approached with a “heavy heart.”

The decline of Dutch Catholicism has been well documented and much commented-upon, but this may be the first time that the head of the Dutch Catholic bishops has admitted to a specific cause.

The Netherlands has been the leader in Western Europe’s post-war swing to the extreme “progressivist” left on social and family issues. In 2002, it became the first country in the world to legalize euthanasia after World War II finally shut down the Nazi eugenics program that ended the lives of thousands of disabled people. That decision was followed by a “protocol” that allowed doctors to euthanize infants. Activists now report that the situation with euthanasia in the Netherlands is “out of control,” with patients being euthanized for depression or other treatable conditions.

The Netherlands is also at the forefront of the global movement to abolish all legal recognition of the traditional family and to promote the Sexual Revolution throughout the world. One of the first to legalize prostitution, the country is also one of the main funding sources of the International Lesbian, Gay, Bisexual, Trans and Intersex Association (ILGA), one of the western world’s most powerful special interest lobby groups working through international bodies like the EU and the UN.

Following this trend, the Dutch bishops have been credited with spearheading much of the so-called “liberalization” of practice and doctrine in the Catholic Church throughout the world. The publication of the notoriously heterodox Dutch Catechism, with the approbation of Pope Paul VI, was a watershed that spread the Dutch style of ultra-liberal Catholicism throughout the Catholic Church. So far did the Dutch Catechism diverge from Catholic doctrine that later editions were ordered to carry a caveat from the pope that it was not a reliable source of authentic teaching.

Shortly after his election, a delegation of bishops from the Netherlands told Pope Francis of the upcoming closure of hundreds of churches, a number amounting to the greater part of the country’s Catholic establishment. The visiting bishops told Pope Francis that a general shutdown has followed the Dutch Church becoming “drastically secularized.”

In an interview with Vatican Radio in December 2013, Eijk said, “The number of practicing Catholics is diminishing very quickly.”

“In the 1950s, 90 percent of Catholics still went to church every Sunday. Now, it’s only five percent,” he said.

The cardinal blamed the growth of “radical individualism” in which “the individual sees it as his duty to invent himself, his own religion, his own worldview.”

Despite the Catholic Church being the largest religious group in the country, at between 23 and 28 percent of the population, weekly attendance at Mass is about 1.2 percent of the Dutch population, or no more than about 200,000. So little are the Dutch Catholics interested in their religion that Cardinal Eijk canceled a planned visit to the country by Pope Francis, fearing an embarrassing no-show from the Catholic population.

At the end of March, Cardinal Eijk received a petition signed by 12,000 of the faithful demanding a halt and expressing their “anger and sadness” over the planned closures and amalgamations. But the problem of how to fill the pews and pay the bills remains.

The fate of the buildings is left up to the local pastors, one of whom told the Wall Street Journal in January that while they hoped the church buildings would not be used for immoral purposes, there are no guarantees. Father Hans Pauw, pastor of St. Eusebius Parish, in Arnhem, said, “There are some things we don’t want—a casino or a sex palace or that kind of thing.”

“But when it’s no longer a church in our eyes, then it can have any purpose.”

The WSJ highlighted one former church that was now being used as a skateboard park for local teenagers. The paper spoke with 14-year-old Pelle Klomp, who said that sometimes people complained about the use the church was being put to. “Especially the older people say, ‘It’s ridiculous, you’re dishonoring faith,’” Klomp said. “And I can understand that. But they weren’t using it.”