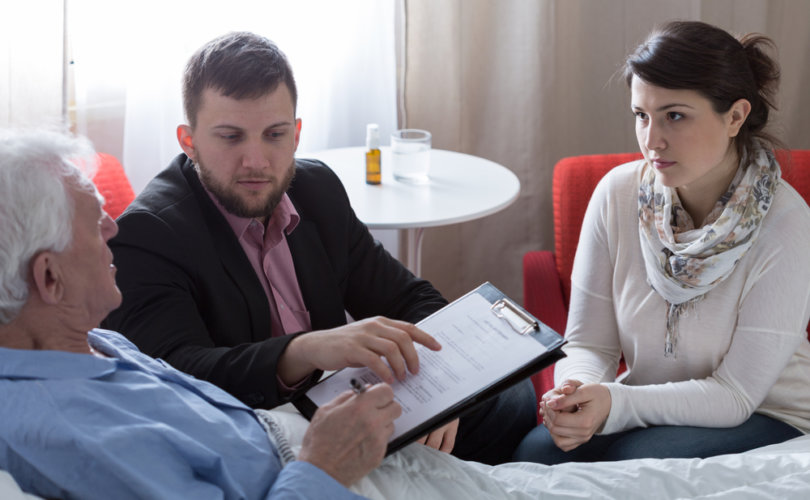 July 5, 2017 (LifeSiteNews) — An advertisement taken out in a major newspaper in the Netherlands by more than 200 Dutch doctors begins, “[Assisted suicide] for someone who cannot confirm he wants to die? No, we will not do that. Our moral reluctance to end the life of a defenseless man is too great. “

The doctors, many of whom currently serve as assisted-suicide providers, are objecting to the unchecked growth of euthanasia in their country, where people who have reduced mental capacity due to dementia are being euthanised.

Current law allows doctors to euthanize without verbal consent if a written declaration of will has been provided in advance. In addition, a doctor has to also first determine that the patient is undergoing unbearable suffering. But with reduced mental capacity, patients are often unable to confirm that their former request to be euthanized — executed perhaps years earlier — is still valid.

Alarm bells began to sound for these doctors a few years ago when an elderly woman was euthanized against her will.

The 80-year-old suffered from dementia. She had allegedly earlier requested to be euthanized when “the time was right” but in her last days expressed her desire to continue living.

Despite changing her mind about ending her life, her doctor put a sedative in the her coffee. When that wasn’t enough, the doctor enlisted the help of family members to hold down the struggling, objecting patient so that she could administer the lethal injection.

“Doesn’t someone have a right to change their mind?” asked Alex Schadenberg, executive director of the Euthanasia Prevention Coalition. He told LifeSiteNews earlier this year, “They sell it as choice and autonomy, but here’s a woman who’s saying, 'no, I don’t want it,' and they stick it in her coffee, they hold her down and lethally inject her.”

“It's false compassion,” Schadenberg continued. “It’s killing people basically out of a false ideology” that treats euthanasia as somehow good when “it’s the exact opposite of what it actually is.”

In 2016, the Dutch doctor was cleared of wrongdoing by a euthanasia oversight panel. The chairman of that panel expressed hope that the case will go to court – not so the doctor can be prosecuted but so a court can set a precedent on how far doctors may go in such cases.

That case remains fresh in the minds of the Dutch as ‘groundbreaking’ new legislation is being floated by the country’s lawmakers.

Legislators in the Netherlands have now proposed the ‘Completed Life Bill’ that would allow anybody age 75 or older to be euthanized even if they are healthy. If the legislation passes, it would be a big step toward the ultimate goal of making euthanasia available to any adult who wants it.

Alexander Pechtold, leader of the Dutch political party D66, said, “It’s my personal opinion that in our civilization dying is an individual consideration. You didn’t ask to be brought into the world.” He went on to explain that this new legislation would be one more step toward the universal availability of euthanasia, part of a process of steady incremental gains over the last few decades.

Belgium’s culture of death seeping into the Netherlands

As reported by Schadenberg several years ago, according to available data, more than 1,000 Belgian deaths were hastened without explicit request in 2013.

“Mortier was not happy, however, that the ‘hastening of death without explicit request from patients,’ which can happen when a patient slumbers into unconsciousness or has lost the capacity for rational judgment, stood at 1.7 percent of cases in 2013. In the Netherlands, that figure was 0.2 percent.”

The Netherlands appears to be going the way of nearby Belgium, with that 0.2 percent statistic climbing rapidly. In 2009, 12 patients with dementia were euthanized. In 2016, there 141 cases reported. And for those with psychiatric illness, there were no cases in 2009 but 60 in 2016.

Boudewijn Chabot, a psychogeriatrician and prominent euthanasia supporter, said in June that things are “getting out of hand.” He continued, “[L]ook at the rapid increase … The financial gutting of the healthcare sector has particularly harmed the quality of life of these types of patients. It’s logical to conclude that euthanasia is going to skyrocket.”

In North America, Alex Schadenberg warns, “People need to recognize that euthanasia or assisted-suicide laws will be abused. Will assisted death be your choice or will it be imposed on you?”