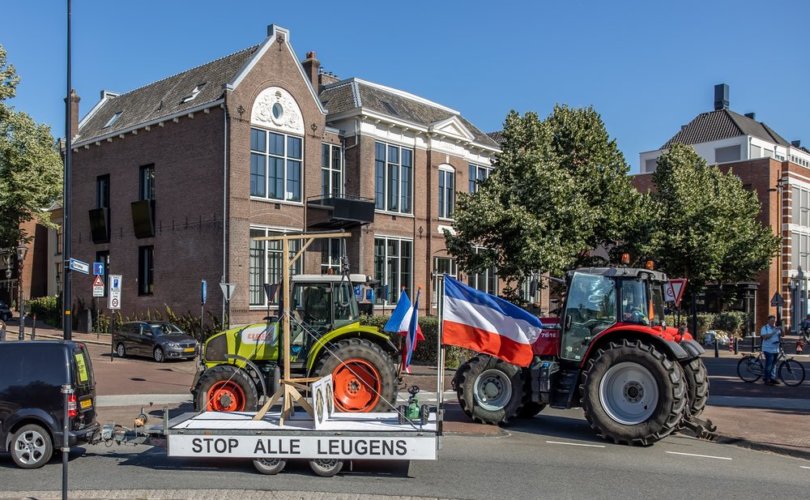 Deventer, Netherlands, June 22 2022 – Farmers with tractors on their way to a farmer's protestshutterstock.com

(LifeSiteNews) – Thousands of farmers in the Netherlands are in an ongoing struggle with the Dutch government over plans that will lead to the expropriation of large numbers of agricultural holdings in order drastically to reduce nitrogen oxide and ammonia.

With European regulations threatening overhead, the Dutch government decided to create a new ministry for “nitrogen and nature” last January, headed by Christianne van der Wal. She was tasked with finding the way to reduce nitrogen oxide emissions by 50 percent before the end of the decade. It is her plan that put thousands of farmers – and their tractors and even cows – in the streets of the Netherlands on several occasions in June. In the absence of a negotiated solution, a bid to “bring the country to a halt” has turned up on social media, with a group of activists planning to block major airports including Schiphol and Eindhoven, as well as the major ports such as Rotterdam, where a large part of international freight from and to Europe is handled.

Van der Wal presented her plan to reduce emissions on June 10, publishing a map with a fateful color-code that indicated by how many percent emissions must shrink in different parts of the country. This ranges from 12 percent in some places to up to 70 or 95 percent in and around the so-called “Natura-2000” zones, where European regulations tend to make established human presence next to impossible, with a blanket ban on running water and sanitation in the name of protecting plant and animal habitats.

In the Netherlands, emissions are higher than in other European countries due to the density of the population and construction in a relatively small area: the country is 237 times smaller than the United States. About half those emissions can be linked back to livestock farming, which is mostly of the intensive variety in the Netherlands. But as it is easier to reduce the number of farms and farmers than to reduce the population and put a curb on construction works, the “nitrogen minister” decided to work on that variable, at the cost of food production, farmers’ livelihoods, individual rights and liberties, and the historic attachment of the Dutch to the agricultural lifestyle.

Indeed, in the wake of the COVID crisis which saw the compulsory closing down of businesses and services – not to mention intense pressure on people to get COVID “vaccines” – the plan to shut down thousands of farms seems like much of a muchness. Authoritarian decisions in the name of the “environment” are clearly being made in order to regulate – or rather, to diminish – meat production and other types of farming in which nitrogen-rich fertilizers are used to feed the world.

As a major food crisis is already looming due to transportation difficulties since COVID, the Russian invasion of Ukraine, and rising prices in the fertilizer industry, wiping away part of the Netherlands’ production seems like a crazy move. Unless, of course, this were all part of the “green” dislike of humanity.

For the Dutch farmers, compliance with the June 10 plan would mean choosing extensive over intensive farming, with huge loss of income, or selling farms that have often been in families for several generations. Failing to follow the rules would lead to expropriation pure and simple – with the government setting aside up to 25 billion euro to pay for wiping livestock and planted fields off the map.

As one young farmer put it, the perspective of getting 1.5 million euro for his plot of land might sound like good news, but the one-time income would be taxable and he would lose the job he loves and has been trained for, forever.

Right-wing parties that are against the Dutch center-left coalition government’s plans are talking about “communism” being implemented by the liberal-left-wing government, and rightly so: the plan reads like an attempt to take away means of production from free individuals and to have them regulated by the state at unprecedented levels.

It is no small paradox that the tiny Netherlands should be able to make such a difference. With its approximately 41,543 square kilometers where almost 17.5 million inhabitants rub shoulders, mostly in individual houses owned by families, and 162 nature reserves, one would hardly expect agricultural produce to be large.

But the Netherlands is Europe’s largest meat producer and it is also the second-largest exporter of agricultural products in the world, behind the United States but well before Germany, Brazil, China, France, and Spain. The country boasts 42 percent of the world’s cut flowers and ornamental plants produce.

Obviously, this could not be true if the Netherlands did not use cutting-edge technology, that includes new methods of indoor production with lighting systems that are limited to wave-lengths necessary for photo-synthesis and 90 percent less need for water. Livestock farms are also moving away from the traditional pastures where cows and sheep would peaceably graze on the Netherlands’ incredibly, almost indecently fertile soil, on ground conquered since the Middle Ages on the rivers and ocean. That ground has now become immensely valuable, selling for up to 80 times the prices obtained in nearby France, and that is also part of the problem.

This kind of intensive, highly-mechanized farming does raise eyebrows and an argument for more “humanized” means of food production can make sense.

However, the Dutch example shows several things: first, that farmers and especially young farmers are proud of their work and prepared to labor hard to feed their fellow-men; second, that feeding mankind’s billions is not at all an impossible task even with limited land; third, that while traditional farming deserves to be promoted, the present move against all kinds of “emissions” will certainly be detrimental to part of that humanity, as food prices rise and production is tyrannically pushed down.

From that point of view the Netherlands appear to be used as a political laboratory, with a top-down approach set on changing landscapes and moving men and women out of their traditional surroundings and out of their homes in the name of “nature.”

Interestingly, other options exist to diminish nitrogen and ammonia emissions (the latter coming from urine and feces of livestock). A milestone in this war against farmers was a May 2022 Dutch High Court decision that suspended building permits and blocked plans for housing, road, and runway construction because the building industry also emits nitrogen oxides. Science.org reported that “the shutdown put some 14 billion euro worth of projects in jeopardy,” according to a major Dutch bank. Farmland, with its relatively low population, is easier to target than the building industry.

And the European Court of Justice is also egging on the Dutch authorities in that direction: the Dutch High Court decision was an implementation of an E.U. court decision that ruled in favor of environmentalists who sued the government for having issued permits for livestock holdings near nature reserves.

The radical right-wing party, Forum voor Democratie, claimed that environmentalist issues are being used to force farmers off the land, to make it available for construction.

Nitrogen makes the soil more fertile; among the environmentalists’ grievances is the fact that traditional heathland, where plants grow that need poor earth to prosper, is becoming greener because of emissions.

Fundamentally, the situation in the Netherlands is linked to a rejection of man’s dominion over nature and mankind’s mission to make land prosper and grow in order to feed, clothe, and protect human beings. That man should be a good steward of nature is one thing: placing the rights of nature above man is another, in line with the dreams of the great “resetters.”

Farmers in the Netherlands are responding with calm and determination. On Wednesday of last week, some 40,000 farmers drove to Stroe, a small town east of Amsterdam, blocking the already clogged highways with their tractors, before gathering in a field with horns blowing and lights flashing. They were plainly fighting for their future and for their children. One proclaimed: “You can’t just close farms that are hundreds of years old. You just can’t.”

Video footage captured farmers blocking major highways with their tractors, in imitation of the Canadian Truckers’ “Freedom Convoy” which blockaded the Canadian Parliament building over tyrannical COVID shot mandates at the beginning of the year.

The Dutch Farmers are not messing around. Amazing. #Netherlands pic.twitter.com/H56HtLuygF

Further footage depicts tensions rising between protestors and the authorities:

Dutch farmers very angry after politicians’ decision to closes dozens of farms and cattle ranches to reduce nitrogen by 30%. pic.twitter.com/zHzMO1gNfu

Farmers also gathered in The Hague last week, complete with cows. Some took to spraying government offices with manure while others blocked the border with Germany using manure in protest of plans to shut down farms.

🚨🚨⚠️⚠️
The Dutch protesters are pouring manure on government offices, flooding streets, and becoming all together ungovernable. This uprising is in response to the WEF controlled government shutting down farms to “save the planet.” You have to see this: https://t.co/YTyax7uagm pic.twitter.com/mXgufQfkRM

Fishermen have also joined in solidarity with the farmers, using their boats to block ports.

The fisherman are standing behind the farmers.. together we are strong👍😘❤️ pic.twitter.com/vXlBHZrIjl

Their protests have full support from the rightwing parties and an increasing percentage of the population stands behind them, with 45 percent now in “full support” against 38 percent last October when the government started indicating that it would use heavy measures against agricultural production. This is despite the annoyances caused by protests.

Next week, with the farmers’ plans to “block” the country, the situation will become more radical. Municipalities around Schiphol, Amsterdam’s airport, have warned that they will clamp down hard on the protests. The Dutch army is also ready to act, according to the Netherlands’ defense minister, Kasja Ollongren. Tanks are already present near the airport.