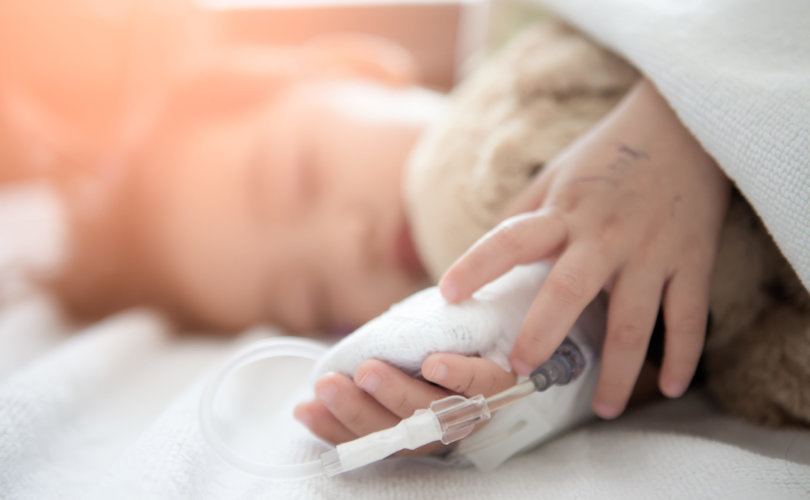 October 15, 2020 (LifeSiteNews) – The ruling coalition government of the Netherlands is moving forward on allowing children 12 and younger to legally end their own lives in the form of state-sanctioned assisted suicide.

In an October 13 letter he wrote to the Dutch parliament, de Jonge cited a study that “shows that there is a need for active termination of life among doctors and parents of incurably ill children, who are suffering hopelessly and unbearably and will die within the foreseeable future.”

De Jonge claims the new rules are designed to help a small “group of terminally ill children who agonize with no hope, and unbearable suffering.”

The new Dutch rule that de Jonge is drafting will lift possible prosecution doctors could face if they take additional actions, such as sedative euthanasia.

A NL Times report noted that the Dutch Association of Pediatrics (NVK) was one of the groups pushing for the rule change, with de Jonge saying that as a result of their support, “I want to ensure more legal safeguards for doctors who, on the basis of their professional standard, proceed with life-ending actions of children aged one to 12 years.”

Assisted suicide has been legal in the Netherlands since 2002, allowed under certain conditions such as when the patient’s suffering is unbearable or there is no prospect of improvement, and also when the patient gives consent to die.

Children under age one and between the ages of 12 to 15 are already permitted to undergo state-sanctioned assisted suicide as long as the patient is terminally ill and there is parental consent.

Teens ages 16–17 do not need parental consent should they choose doctor-assisted suicide.

Currently, patients under 12 cannot ask for voluntary doctor-assisted euthanasia. Technically, a doctor could assist in the end the life of a child in the 1-12 age bracket if they are diagnosed with uncontrollable and unbearable suffering, and with parental consent, but only by having nutrition withheld to speed up death.

In 2014, Belgium became the first country to legalize assisted suicide for children.

In a Catholic News Agency report from September, Dutch cardinal Willem Eijk said that once a society such as his home nation allows for assisted suicide, any safeguards in place for such a law are slowly errored.

“Once accepting the termination of life for a certain measure of suffering, one will always be confronted with the question of whether it should not also be allowed in suffering that is only a little bit less,” Eijk said to the CNA.

Jack Fonseca, director of political operations for Canada’s Campaign Life Coalition (CLC), said the news of the Dutch allowing for the state–sanctioned killing of kids shows the nation has lost their “moral compass.”

“What truer indicator of a debased and morally corrupt society could there be than elected lawmakers sanctioning the killing of children under the age of 12,” Fonseca told LifeSiteNews.

“Those in power in the Netherlands have gone mad, as well as the population that is tolerating this evil without so much as a whimper of resistance. They have so lost their moral compass that they cannot even see how evil this is.”

Fonseca commented to LifeSiteNews that although suffering is a difficult reality of life, “human beings are meant to persevere and always respect the divine spark of our Creator which we see in each one of us.”

Fonseca added that we must “resist the urge” to “snuff” out suffering “especially” when it “comes to children” who are ill.

The new Dutch rule change comes after 12 months of heated debate between the four ruling Dutch parties that form the current government in the Netherlands.

Currently, the Netherlands is governed by the four-party alliance of the Christian Democrat Appeal party, which de Jonge is a member, the more conservative ChristenUnie party, the very liberal Democrats 66 party, and the People's Party for Freedom and Democracy (VVD).

According to a report in The Guardian, the Christian Democrat Appeal party and the ChristenUnie party were opposed to the new rule changes. The VDD (the party of the nation's current Prime Minister Mark Rutte) and the Democrats 66 party support the liberalizing of assisted suicide rules for young kids.

It is estimated that around 7,000 persons die annually in the Netherlands after allowing themselves to be killed by the state’s medical system.

The procedure typically involves a doctor giving a person an intravenous sedative that is followed by a drug that makes breathing difficult.

The idea of allowing one to take their own life with assistance from the state in the Netherlands has a long history.

Nearly 50 years ago, Dutch Supreme Court justice Huib Drion argued in favor of giving people who had reached age 79 the means to be able to kill themselves with a poison pill.

Drion died in his sleep in 2004 at age 86, but his idea of having a poison pill available for the elderly lives on to this day, with the leftist D66 party recently pushing for such a drug.