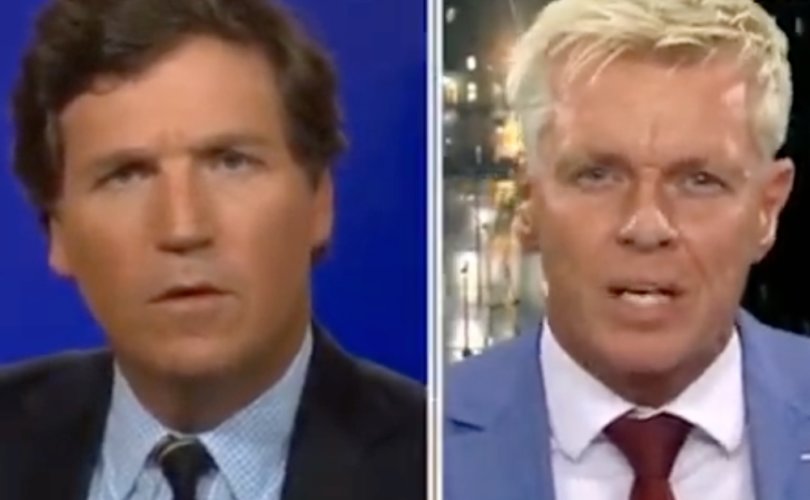 (LifeSiteNews) — Rob Roos, a Dutch Member of the European Parliament (MEP), told Tucker Carlson that Pfizer never tested COVID vaccines for the ability to stop transmissions and that this is “one of the biggest scandals of our time.”

I joined @TuckerCarlson to discuss one of the greatest scandals of our time. #COVID passports and mandates placed millions of people outside society. But there was NO evidence the #vaccine would even stop the transmission. This should have massive political consequences: pic.twitter.com/dQQICUKEBK

Shortly before Roos went on Carlson’s show, he questioned Pfizer executive Janine Small in a hearing in the European Parliament. The Dutch MEP asked Small if the Pfizer COVID shots were “tested on stopping the transmission of the virus before it entered the market.”

In her response, Small appears to admit that the injections were not thoroughly tested before entering the market

“Regarding the question around whether we knew about stopping immunization before it entered the market, no,” Small responded, laughing.

“These, you know, we had to really move at the speed of science to really understand what is taking place in the market,” she said, adding that the company was “doing everything at risk.”

It remains unclear whether Small might have meant something else, for instance the jabs’ waning effectiveness, given that she swapped out the word “transmission” for “immunization” in her response.

— Article continues below Petition —
PETITION: Demand the Conservative Party apologize for not resisting Trudeau's COVID regime
Show Petition Text
4399 have signed the petition.
Let's get to 5000!
Thank you for signing this petition!
Add your signature:
Show Petition Text

“It really was a special moment. For the first time, Pfizer admitted that the vaccine was not tested on stopping the transmission of the virus when it entered the market,” Roos said in his interview with Carlson.

“This has massive implications,” Roos continued. “Governments pushed millions of people worldwide to get vaccinated by telling you to do it for your grandmother, and they tricked perfectly healthy young people into taking this jab using false arguments.”

The Dutch MEP lamented that governments had sowed “immense hatred” towards people who refused to take the jab. He pointed out that many governments introduced COVID passports which made “access to parts of society,” like going to a restaurant or the gym, “conditional.”

The Dutch politician observed that Austria “even had a lockdown for the unvaccinated” and “literally imprisoned people in their own homes.”

“All of this was based on the idea that vaccinations help prevent the spread of the virus,” Roos continued. “But this has now [been] proven to be a big lie,” since the Pfizer executive has admitted that there is “no scientific basis to say that vaccination would stop the transmission of the virus.”

“And I find this one of the biggest scandals of our time,” Roos added. He promised that he “won’t forget what they did to millions of people.”

“If we are a democracy then we should have accountability. And that’s what I’m calling for,” the Dutch MEP said.

Carlson agreed with Roos and remarked that “Pfizer knew this. None of its executives have bothered to correct these politicians, and yet no Pfizer executives have been charged with the crime they committed, which is pretty unbelievable.”