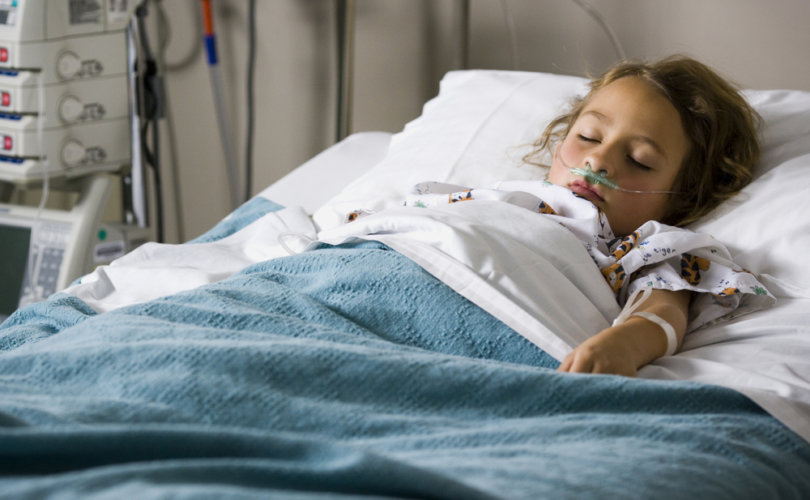 June 22, 2015 (LifeSiteNews) — The Dutch Pediatric Association says that allowing teenagers to ask for euthanasia discriminates against younger children and is asking that the age limit for doctor-assisted death be removed.

Current Dutch law permits children 12 and older to ask for euthanasia with parental approval while 18-year-olds fall under the regulations governing adults.

“We feel that an arbitrary age limit such as 12 should be changed and that each child's ability to ask to die should be evaluated on a case-by-case basis. If a child under 12 satisfies the same conditions, pediatricians are currently powerless. It's time to address this problem,” said Eduard Verhagen, pediatrics professor at Groningen University and member of the Pediatric Association's ethics commission.

“It’s about extreme exceptional situations of children who will die soon, and where you’d like to offer parents the opportunity to have their child die in a dignified way. As a pediatrician I cannot explain that everybody has that right, except for the age group between 1 and 12 years,” Verhagen said according to Netherlands Times.

Verhagen claims that under the 2004 Groningen Protocol, which he helped write, the termination of a child's life (under age 12) is already acceptable if four requirements are met: 1) the presence of hopeless and unbearable suffering; 2) the consent of the parents to termination of life; 3) medical consultation having taken place; and 4) careful execution of the termination.

However, critics of the legalization of doctor assisted death have pointed to the expansion of euthanasia to those who don't have the capacity to request it, despite the so-called stringent safeguards that proponents believe are in place to protect vulnerable people.

“There is no limit to the culture of death once it is fully off the leash,” wrote bioethicist Wesley Smith in the National Review. “Dutch law allows euthanasia for children age 12 and over. But now a prominent pediatrician wants the age limits erased.”

“And don’t think the 'terminal illness' restriction would last two weeks. Dutch law does not require that people be dying to be euthanized,” Smith said. “Think that will never happen? It’s already the law in Belgium.”

Alex Schadenberg of the Euthanasia Prevention Coalition notes on his blog that Belgian “euthanasia insanity” is escalating with the case of a 24-year-old healthy woman (Laura) who will die by euthanasia this summer for psychological reasons.

“Euthanasia for psychological reasons is done when a psychiatrist agrees that the psychological pain that a person is experiencing cannot be relieved in a way that the individual finds acceptable,” Schadenberg explains. “That means, Laura may be treatable, but Laura has decided that the only acceptable 'treatment' is death.”