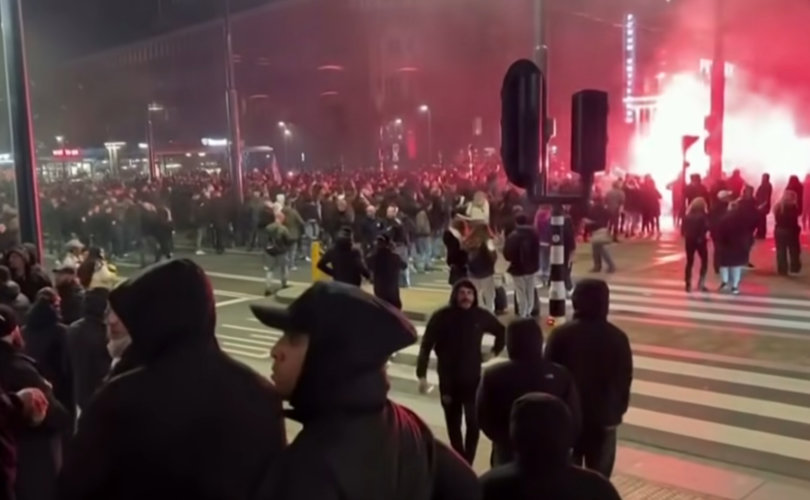 (LifeSiteNews) — Demonstrations are gaining steam in Europe against COVID restrictions that are taking an increasingly tyrannical turn in many countries. At the same time, reports of police violence and hard-handed responses from the Dutch and French governments in particular are pouring oil on the fire, with the opposition to vaccine mandates or quasi mandates slamming the use of undue force against protest rallies, while law enforcement officers and first responders argue they cannot do anything but protect themselves against rioters who are out for destruction and mayhem.

A week of demonstrations and uprisings in the French department of Guadeloupe in the Caribbean, which even led president Emmanuel Macron to send out special forces to the island in a bid for stringent law enforcement, has led the French government to back down partially from the vaccine mandate that is being vigorously fought by local health workers.

The police responded by firing live bullets that wounded four protesters, according to the Dutch press. All victims are at present hospitalized. Further reports and videos posted online spoke of one or more demonstrators who were “killed” by police gunfire, but police said this is “fake news.” The police also said they fired “warning shots.” Public inquiries about the police shots are currently underway.

The mayor of Rotterdam, Ahmed Aboutaleb (he is of Moroccan origin, and only recently won the World Mayor Prize from the City Mayors Foundation for his environmentalist and COVID policies) said that the injured men were not in critical condition. He also went on record saying that the police had no other choice than to protect themselves when faced with rioters “who had truly come to make victims.”

“They have the idea that they must engage in fighting the police. But there is not a single mitigating circumstance regarding the will to kill a policeman,” he said. He added that a riot officer who took off his protection to help a man who had been shot in the leg was then hit in the chest by a brick. Dozens of other police officers sustained head or leg injuries, according to the local chief of police, Fred Westerbeke.

Videos posted on Facebook also showed that the rioting and arson went on for a full twenty minutes before the police showed up, after having apparently disappeared; then Mobile Units were called to Rotterdam from the whole country, arriving within two hours, for a fight that would last deep into the night. The leftwing Volkskrant said the riots may have thrived on another grievance against the government: the ban on fireworks for the upcoming New Year’s Eve.

Over the last three weeks, people without a health pass have been banned from many public venues — restaurants, sports, museums, cultural activities — as daily “cases” are rising to record highs. As of tomorrow, all citizens, “vaccinated” or not, will be required to keep a distance of 1.5 meters from strangers or face a €95 fine (over $100) in all places where the health pass is not mandatory. Shops and other public places must close early.

Moreover, a negative test result is no longer acceptable in order to obtain a health pass, which is only available for the fully “vaccinated” or people who have recovered from COVID.

One demonstrator, Marco Buis, a middle-aged man who regularly addresses the public on “Onrecht TV” (“Injustice TV”), was hit in the stomach by a bullet, probably fired by police. He sent his followers a video message, proclaiming, “We will go on, fighters!” Other regular protestors came to support Buis. One of them, Tinus Koops, made clear that he opposes violence, but added, “I understand that this happens. A people that becomes rebellious will end up asserting its power. I can see in my glass ball that all this is far from over.”

The mainstream press is calling some of the protesters “extreme right-wingers.”

As things stand, the real question is who joined the violence in Rotterdam, and later through the weekend from Groningen and Zwolle in the north to Enschede and Roermond in the south.

About 50 arrests were made on Friday evening in Rotterdam. According to the Dutch media, ordinary culprits took part in the rioting: Mostly underage football hooligans, as well as youths who respond to calls on social media apps to meet in hotspots where they hope to join street fights against the police.

A close look at videos of the riots that often take place later at night also shows that a number of the rioters who act on the fringes of the main, peaceful demonstrations, are members of “ethnic minorities” — in the Netherlands, large immigrant communities from Turkey, Morocco, and other Islamic countries can be found in most of the big cities.

The upshot of the violence is that a large percentage of the Dutch population is angry at the rioters and at the demonstrations themselves. But one lady from Rotterdam underscored that “everyone is sick and tired of COVID, so in my opinion it will only get worse.”

Sociologists speak of the “frustration” of youths and underlying radicalization that express themselves in street violence. In a way, this is a boon for the authorities: Dutch justice minister Ferd Grapperhaus called the riots “repulsive,” saying there should rather be a “serious debate” over COVID measures.

Government communication about COVID, with its incoherencies, contradictions and gaslighting, does nothing to defuse tension, especially now that vaccine opponents are being scapegoated as responsible for cases and hospitalizations.

King Willem-Alexander of the Netherlands met with police and first responders in Rotterdam on Monday to assure them of his support. He thanked them “in the name of 90 percent of this country.”