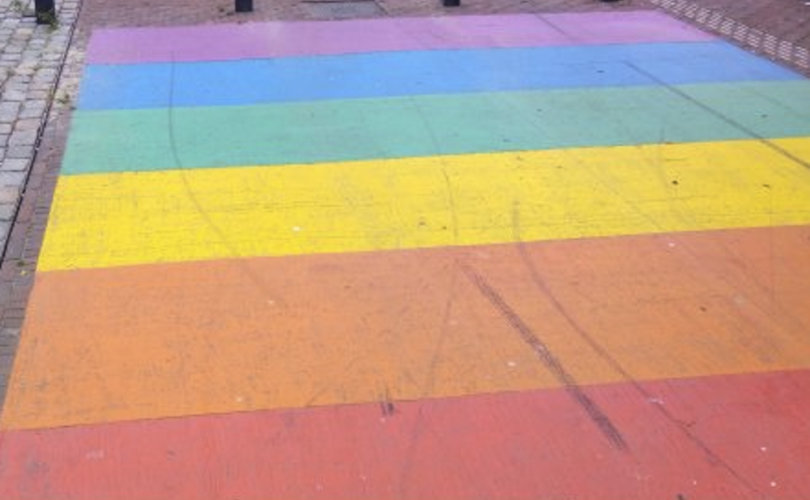 March 7, 2019 (LifeSiteNews) — Fr. Maikel Prasing, a parish priest in the southern region of Brabant in the Netherlands, has called on churchgoers to sign a petition in favor of a rainbow-colored pedestrian crossing in front of the Catholic basilica of Oudenbosch of which he is the rector.

He made the appeal during Sunday Mass, the so-called “Carnival-mass” celebrated in some parishes in Noord-Brabant and Zuid-Limburg, the historically Catholic provinces of the Netherlands on the Sunday before the beginning of Lent on Ash Wednesday.

Fr. Prasing explained during his homily that it is important for everyone to feel “welcome,” whether they are homosexual, lesbian, bisexual or transgender. He hopes for the pedestrian crossing to be placed right in front of the St. Agnes and Barbara Basilica, an imposing building erected in the 19th century as a (downsized) mingled replica of the Archbasilica of St. John Lateran – the Pope’s cathedral – and St. Peter’s in Rome.

The rainbow zebra-crossing – or “gaybra” crossing as they are familiarly called in Dutch – would lead to the Jesuit’s Square across the road and would be a “dream entry to the Basilica,” said Prasing. “It would show everybody is welcome and belongs.”

Prasing had been toying with the idea of an LGBT inclusive crossing for some time. “I thought this would be the right moment to bring up the suggestion. The Carnival-mass attracts a wide public and besides, it fits in seamlessly with the Mass’ theme: showing off your own best side,” he said.

In the New Latin Rite, the March 3 Mass this year was the Eighth Sunday of ordinary time, during which the Gospel of the beam and the straw was read.

Fr. Prasing explained that a pedestrian crossing is necessary because many drivers do not follow the 20 mph speed limit and traffic in the village center has become dangerous.

But he did not hesitate to use his argument to ideological ends, adding: “Many towns already have a rainbow pedestrian crossing. I think it would fit well with Oudenbosch. As a village, we can show that we want to interact with each other in an open, accessible and respectful way. As a village, we can now make a beautiful ‘statement.’”

His petition, which is now closed, received 180 signatures.

Fr. Prasing said in an interview with BNDeStem in 2017 that he studied theology as a young man but swore never to become a priest. His “love for parish work” drove him to choose a “pastoral function” after all – but he was rejected by traditionally-minded Bishop Joannes Gijsen in Roermond, who refused to accept theology students from the faculty of Heerlen where Prasing had studied in his seminary. “Practically all student priests ended up in Brabant,” Prasing told BN. “Bishop (Hubertus) Ernst received us with open arms.” Bishop  Ernst was known as a progressive, socially aware and favoring an “outgoing Church.”

A word about “Carnival-masses” in the southern Netherlands: a number of Catholic parishes organize them, usually on the last Sunday before Lent (the penitential Sunday of Septuagesima of the Old Latin Rite not have lent itself to such a ceremony), inviting brass bands, carnival “princes” and local pop singers to accompany the worship (?) of a gaudy crowd dressed up in bright colors and clown costumes. Some examples of the 2019 edition are available here, or here. Dutch speakers will be astonished to hear the parish priest telling jokes during his homily in the second video.

Perhaps Prasing’s petition wasn’t so surprising after all.