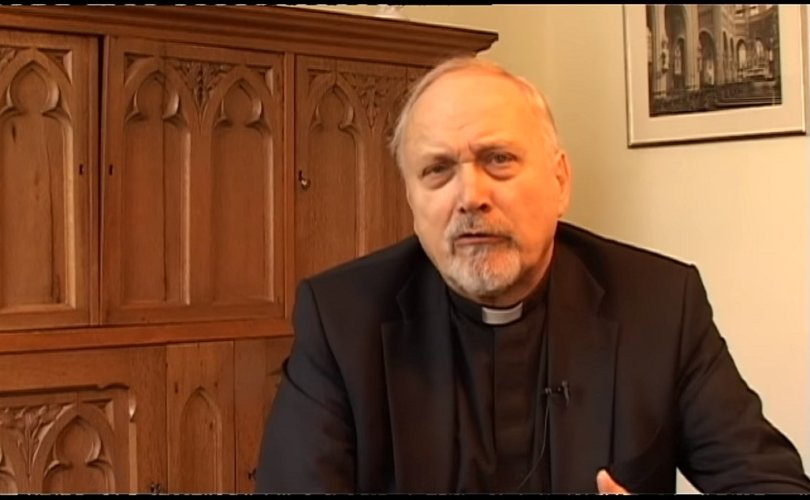 November 7, 2019 (LifeSiteNews) – A retired Dutch priest, Cor Mennen, has been slammed by his bishop for having expressed criticism of Pope Francis after the Amazon Synod and the idolatrous cult of Mother Earth, the Pachamama. But the auxiliary bishop of his diocese, Robert Mutsaerts, supported Mennen by publishing the priest’s latest blog post on fortesinfide.nl on his own “episcopal” blog, “Paarse Pepers” (“Purple Peppers”).

The support of Mutsaerts, who has himself been very outspoken about the lack of Catholic identity of the Amazon synod and the presence of figures of Mother Earth, “Pachamama,” in a number of paganized ceremonies in the presence of the pope or in the church of Santa Maria in Traspontina in Rome, is a sign of the courage of members of the Dutch clergy who will not be intimidated by episcopal and media threats.

Speaking of a recent blog post of Fr. Cor Mennen, Bishop Gerard de Korte of ’s-Hertogenbosch (Den Bosch, Netherlands), told the Catholic weekly Katholiek Nieuwsblad on October 31 that he had been obliged to “whistle back” Fr. Mennen: “Calling the pope a heretic, that really doesn’t do,” he said.

Three days earlier, Mennen had criticized the excessive respect shown by many Catholics to the papacy because they do not take into account that while Peter is the “rock” on which Jesus Christ founded His Church, He also ordered Peter back: “Get thee behind me, Satan!”

In the Gospel of Matthew, recalled Mennen, Our Lord established Peter as the head of the Church, but it was only moments later that Peter suggested that He should refrain from going to Jerusalem so as to escape His passion and his death, upon which Jesus immediately rebuked him.

“Does not the Gospel make clear to us that it is only the profession of faith of Peter (and the professing Peter) that is the rock upon which Christ builds His Church, but that the same Peter is a danger for the Church when he lets himself be led by human considerations and not by the will of God?” wrote Mennen.

“That is clearly the case with Francis,” he continued, quoting the “idolatrous ceremony” in the Vatican Gardens as the “summit of deviation from the will of God.”

Mennen recalled how many Catholics had been “horrified” by that and other ceremonies involving the Pachamama statues, and rightly so, given the clarity of the First Commandment: “I am the Lord thy God; thou shalt not bow down to graven images.”

Underscoring Pope Francis’s own description of the statuettes as “Pachamama,” Mennen added that this was no “superficial error” on the part of the pope because he had signed the Abu Dhabi document stating that the “diversity of religions” is “willed by God.”

Among other errors and bowing down to the spirit of the world, Mennen also noted that Pope Francis “actively promotes Liberation Theology” and always prefers socialist and communist politicians to others.

He finally quoted an answer to a confused priest saying he was tempted not to name the pope during Mass. Mennen said he considered the pope to be “harmful” to the Church and added: “On good grounds I think he is a heretic, but at this time no one in the Church is entitled to declare this officially, thus provoking his excommunication.” “So for the time being we are stuck with a pope who is formally the head of the Church and at the same time harmful to the Church. We can only hope that the next conclave will make a wiser choice. In the meantime, we just name him in the canon. It is not otherwise. But it is not forbidden at that same moment mentally to say a rapid prayer for the conversion of the pope,” he concluded.

Cor Mennen, who will be 75 next year, has not been canonically sanctioned in any way. The former parish priest of Oss, in the diocese of Den Bosch, now does replacements in a number of parishes, celebrating Sunday Mass; preaching; and giving lectures in the local seminary, particularly on canonical matters.

However, Bishop de Korte did seek to distance himself from Mennen, while avoiding open support for the innovations to the priesthood and the liturgy promoted by the Amazon Synod.

Underscoring that the Synod Fathers have no power of decision, de Korte did say he was happy that the synod had taken place in order to see how “pre-Christian” religions of the Amazon could be “linked to Catholicism:” “So, how can we integrate what is true, good, and beautiful in their culture into our evangelization? How can that become part of the expression of our faith?” he asked.

“God is there already before the missionary comes,” he added, glossing over the fact that primitive, pagan religions idolize demons.

De Korte was questioned on his auxiliary bishop’s criticism about the synod and replied that he favors “the liberty to express one’s opinion.” It was at this point he said there was “one priest” he had to “whistle back” because he had “qualified the pope as a heretic.” He added that “the pope would not want systematic applause” and that with such a tone, “dialogue is excluded.”

Speaking with LifeSite in a short interview, Mennen made clear that there was no particular “problem” with his bishop and that the statement sounded more like “publicity.”

“I am obliged to say that the pope does not have the slightest interest in dialogue,” he remarked.

According to Mennen, there is little public interest in the Netherlands for the Amazon Synod, but he is of the opinion that “many priests” think the same as he “but do not know what to do.” Underscoring that the Netherlands has mostly good bishops, he regretted that “they all remain silent; it seems as if they were all afraid.” He called the support of Bishop Mutsaerts for his writings “important,” in order to “make more Catholics aware of the situation.”

He added that “people are so used to have respect for the pope that they think things can not be that bad: they just believe it’s fake news.”

Mennen paid homage to Alexander Tschugguel, who threw the Pachamama idols into the Tiber, adding that the news coming from Rome at present is “not good, be it on the doctrinal, the moral or the financial” place, “something that this pope appears in a way to favor.”

When asked by LifeSite what people should do in the present, he answered: “The classic reply is to pray, but it is also important that lay people ask their bishops to speak out forcefully.”

Below is the full translation by LifeSite of Fr. Mennen’s latest blog post that was republished by Bishop Mutsaerts on his website. His text expands on the points Bishop de Korte was unhappy about.

This seems to me, frankly, to be real nonsense. It’s not that simple at all. The Catholic Church has always tried in its missionary work to integrate the true, the good, and the beautiful contained in a culture receiving the mission. Thus, from the beginning, Christianity was linked to Greco-Roman civilisation, and thus the Church became the bearer of the unique Christian Western culture. In doing so, the Church adopted all the beautiful things of the Greco-Roman culture: visual art, architecture, and great philosophers such as Plato and Aristotle, which it  Christianized, but it also radically rejected all pagan elements that do not correspond to the Christian faith, such as the subordination of women, abortion, infanticide, obscene plays, and bloody gladiatorial battles. The temples were gradually transformed into churches, but no one would have dreamed of showing any respect for the Roman idols. On the contrary, the early Christians would rather have died than do so. Throughout history, missionaries of the existing culture have incorporated what was appropriate to the gospel and rejected what was contrary to it. This is the true synthetic line that no one in the Church will object to, including Bishop Mutsaerts.

For the first time in Church history, the central authority in the Church now deviates from this synthetic approach (normal inculturation) and proclaims syncretistic (arbitrary mixing of real pagan elements with Christian) views. It is not the case that some confused bishop or some old Liberation Theologian said some strange things on the Amazon Synod; no, the pope-approved working document of the synod contains all kinds of syncretic elements: the concept of Mother Earth already appears in it; the Amazon is called a locus of theology alongside the Bible; we need to get a better understanding of the ecological importance of the Amazonian worship of the spirits. According to the synod document and many synod fathers, this should be included in the Catholic Amazonian faith. And the fact that I’m not talking nonsense is proven in the whole Pachamama thing, where under the watchful and approving eye of the pope (something unheard of in 2,000 years), pagan rituals took place in the Vatican gardens around the goddess Pachamama. This idolatrous lady was later solemnly carried in a procession with the pope into Saint Peter’s, and she was given a place in the synod aula. Is this part of Bishop de Korte’s synthetic vision? I suppose so, because it is only against this that the remarks of his auxiliary bishop, who, according to Katholiek Nieuwsblad, is anti-synthetic, are directed.

The goddess in Saint Peter’s

This whole issue is not about synthetic or anti-synthetic or modern or old-fashioned. We can discuss those things, but we can all live with them. This is about the Catholic faith itself. At the highest level of the Church, there is a deviation from the Catholic faith itself. In the Church we have a clear word for important deviations from Catholic doctrine: heresy. This is one of the most important sins against the Church. The authority in the Church is called to act against it, as all the popes and councils have done in the past of the Church. The present pope and “his” synods do not do this. They proclaim or at the very least promote certain heresies, also by deliberately using unclear language or by expressing opposing opinions. The Pachama event goes beyond heresy: it is apostasy (apostasy) by agreeing to worship idols, which radically violates the First Commandment of the Decalogue.

The bishop told K.N. that he whistled me back because I called the pope a heretic. Well, as regards the whistling back, it wasn’t that bad: at a chapter meeting, he told me that such an accusation was really not possible and put an end to all dialogue. Well, I don’t know what “dialogue” one should have with heretics. Faced with the Church’s constant doctrine, they can either agree or reject it. If they agree with the doctrine, there is nothing wrong. If they don’t, they are heretics. Moreover, I have never seen the pope’s willingness to engage in dialogue during his entire pontificate. The dubia cardinals are still waiting…

It goes farther and farther, by the way. The role of the pope in the Pachama affair could tempt me to give the pope an even more serious qualification than “heretic.” I won’t do that now, but everyone can draw his own honest conclusions.