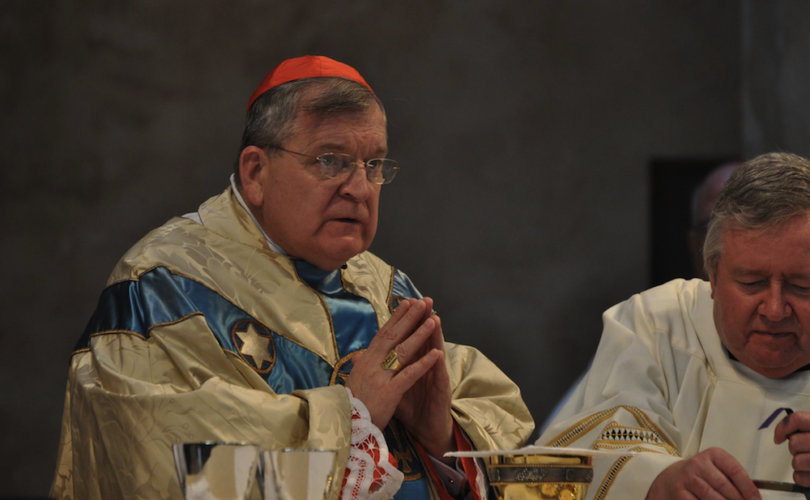 August 31, 2017 (LifeSiteNews) – Cardinal Raymond Burke will speak at an important event in Dallas October 6-7 that will explain and clarify the message the Blessed Mother gave us 100 years ago at Fatima as it relates to the current situation in the world.

Pilgrims should attend the Fatima Centennial Summit “to obtain a better understanding of Our Lady’s message and to reflect upon in as to how it relates to their spiritual life and their eternal salvation,” Catholic Action for Faith and Family President Thomas McKenna told LifeSiteNews.

The gathering is meant for those who believe the importance of the message of Our Lady of Fatima, said McKenna, but also for anyone who may not be aware of God’s message delivered to mankind by the Blessed Mother.

“The message of Our Lady of Fatima is so important for our times we felt it was necessary to reflect upon our Lady’s message on the occasion of the 100-year anniversary of her apparition,” McKenna stated. “This also ties in very directly with the campaign we sponsor and which Cardinal Burke leads, Operation Storm Heaven, which is a prayer campaign with a goal to have 1,000,000 people praying the rosary on the first of each month in union with the cardinal.”

“Cardinal Burke will preside over the entire event,” he said, “and address the profound importance and impact the apparitions have on the Church 100 years later.”

“Cardinal Burke has a profound devotion to the Blessed Mother and the Fatima apparitions,” McKenna told LifeSiteNews.

The Summit will include First Friday Mass, a Rosary procession and the Holy Rosary led by His Eminence, who will also present the Summit’s keynote address.

“Cardinal Burke is one of the councilors of the Holy Father and is a member of the council that will elect a future pope,” said McKenna. “He therefore has a very special role and is an authority on Church Doctrine.”

LifeSiteNews Editor-in-Chief and co-founder John-Henry Westen is among the speakers. Westen will offer a message related to modern culture today.

“We wanted to have the Fatima message addressed, analyzed and reflected upon from various angles that would resonate with the public,” noted McKenna. “The message was for all mankind. That is why we have John-Henry Westen addressing the modern crisis and the extent it affects faithful Catholics.”

Fr. John Trigilio, a nationally known priest and EWTN host, will address how the message resonates with clergy today;

Karl Keating, Catholic Answers founder and famed apologist, will address how the Fatima message is a key evangelizing message for today;

Dick Lyles, CEO of Origin Entertainment, will discuss a feature film he is making about the story of Fatima;

Fr. Andrew Apostoli, a renowned American expert on Fatima and founding member of the Franciscan Friars of the Renewal, will outline Our Lady’s apparition;

Thomas McKenna, president of Catholic Action for Faith and Family, will speak about his new book “The Fatima Century: How The Pilgrim Virgin is Changing Our Generation,” and the world-famous International Pilgrim Virgin Statue, which will be present during the two-day conference;

David Carollo, executive director of the World Apostolate of Fatima, will discuss the timeliness of the message.

Dallas was chosen for its central U.S. location with convenient airport access, McKenna said. However, registrations have been received for attendees from Europe as well.

McKenna told LifeSiteNews that with Cardinal Burke presiding the Summit has developed into the most significant conference to conclude the Fatima Centenary.

Click HERE for more information and to register for the October 6-7 Fatima Centennial Summit 2017.