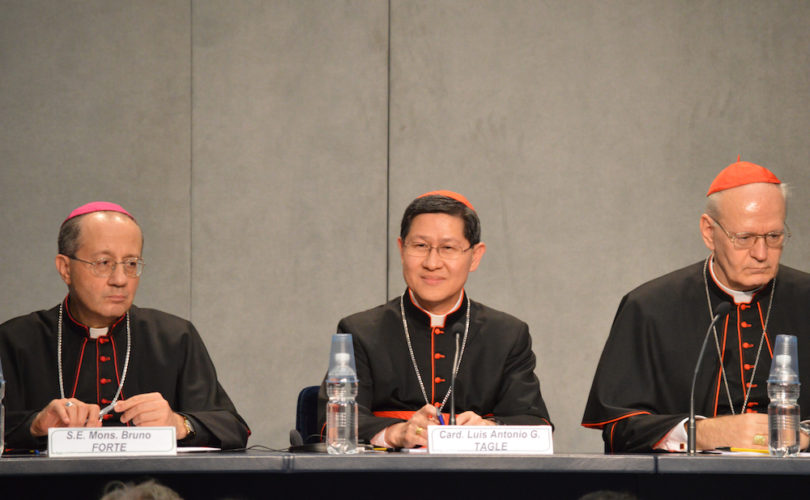 ROME – The Vatican’s interim report on the debates at the Extraordinary Synod on the Family, released in Rome this morning, includes a range of controversial proposals that are eliciting strong reactions, including a statement from the Voice of the Family coalition charging that it amounts to a “betrayal” of the Catholic faith.

The document, which is not definitive and is merely meant to summarize the debates of the first week, asks whether “accepting and valuing [homosexuals’] sexual orientation” could align with Catholic doctrine; proposes allowing Communion for divorced-and-remarried Catholics on a “case-by-case basis”; and says pastors should emphasize the “positive aspects” of lifestyles the Church considers gravely sinful, including civil remarriage after divorce and premarital cohabitation.

After the document, known as the relatio post disceptationem, or ‘report after the debate,’ was read in the Synod hall this morning, numerous bishops reportedly rose to raise concerns or ask for clarification.

Cardinal Peter Erdo, the synod’s general relator and thus the document’s lead author, told a press conference at the Vatican this morning that some bishops questioned why the document fails to mention Church teaching that homosexual unions are “disordered.” Vatican reporter John Thavis, who describes the document as a “pastoral earthquake,” wrote that “at least one bishop asked what happened to the concept of sin,” noting that it is hardly mentioned in the document.

The document has drawn strong praise in mainstream media and from liberal Catholics. Joshua McElwee, the Vatican correspondent for the leftist National Catholic Reporter, commented on Twitter, “Reading this #Synod14 document, I don't know what to say. It feels like a whole new church, a whole new tone, a whole new posture. Wow.”

However, it has also met a sharp rebuke from Catholic activists. John Smeaton, co-founder of Voice of the Family, a coalition of 15 international pro-famiy groups, said it is “one of the worst official documents drafted in Church history.”

“Thankfully the report is a preliminary report for discussion, rather than a definitive proposal,” he said in a press release. “It is essential that the voices of those lay faithful who sincerely live out Catholic teaching are also taken into account. Catholic families are clinging to Christ’s teaching on marriage and chastity by their finger-tips.”

‘Accept people in their concrete being’

The document is largely framed in terms of the need to reach out to people in their sinful state, or, as it says, to “accept people in their concrete being.” This “requires that the doctrine of the faith … be proposed alongside with mercy,” it explains.

It emphasizes what it calls the “law of gradualness,” suggesting that while a couple may not live up to the “ideal” of Christian marriage as totally faithful and open to life, pastors should emphasize the “positive elements” in the relationship in order to help guide the couple to the ideal.

“Following the expansive gaze of Christ, whose light illuminates every man the Church turns respectfully to those who participate in her life in an incomplete and imperfect way, appreciating the positive values they contain rather than their limitations and shortcomings,” it states.

Communion for ‘remarried’ couples on a ‘case-by-case basis’?

In the case of divorced-and-remarried Catholics, the document calls for pastors to avoid “any language or behavior that might make them feel discriminated against.”

Though noting that “some” Synod fathers argued in favor of the current practice barring these Catholics from Communion, the bulk of the document’s discussion on the topic presents arguments from those opposing the practice.

“For some, partaking of the sacraments might occur where it is preceded by a penitential path – under the responsibility of the diocesan bishop – and with a clear undertaking in favor of the children,” it reads. “This would not be a general possibility, but the fruit of a discernment applied on a case-by-case basis, according to a law of gradualness, that takes into consideration the distinction between state of sin, state of grace and the attenuating circumstances.”

It then critiques those cardinals and bishops who defended Church teaching and who had suggested divorced-and-remarried Catholics could nevertheless do a “spiritual communion.”

“Suggesting limiting themselves to only ‘spiritual communion’ was questioned by more than a few Synodal Fathers: if spiritual communion is possible, why not allow them to partake in the sacrament?” the document reads.

In a section titled ‘Welcoming homosexual persons’, the document states: “Homosexuals have gifts and qualities to offer to the Christian community.” It then asks: “Are our communities capable of providing [them a welcoming home], accepting and valuing their sexual orientation, without compromising Catholic doctrine on the family and matrimony?”

“The Church furthermore affirms that unions between people of the same sex cannot be considered on the same footing as matrimony between man and woman,” it adds. “Nor is it acceptable that pressure be brought to bear on pastors or that international bodies make financial aid dependent on the introduction of regulations inspired by gender ideology.”

At the Vatican press conference this morning, Michael Voris of ChurchMilitant.TV challenged the authors on this section. “Are the Synod fathers proposing that ‘gifts and qualities’ flow from the sexual orientation of homosexuality?” he asked. “Is the Synod proposing that there is something innate in the homosexual orientation that transcends and uplifts the Catholic Church, the Christian community, and if so, what would those particular gifts be?”

In response, Archbishop Bruno Forte, the Synod’s special secretary, said, “I guess that what I want to express is that we must respect the dignity of every person, and the fact to be homosexual doesn’t mean that this dignity must be not recognized and promoted. … I think it is the most important point, and also the attitude of the Church to welcome persons who have homosexual orientation is based on the dignity of the person they are.”

Speaking in Italian at another point in the press conference, Forte said that homosexual unions have “rights that should be protected,” calling it an “issue of civilization and respect of those people.”

Catholics must ‘oppose the course being taken within the Synod’

Patrick Buckley of European Life Network said the report is “an attack on marriage and family” that “in effect gives a tacit approval of adulterous relationships, thereby contradicting the Sixth Commandment and the words of Our Lord Jesus Christ on the indissolubility of marriage.”

Maria Madise, coordinator for Voice of the Family, asked whether parents must now “tell their children that the Vatican teaches that there are positive and constructive aspects to … mortal sins” such as cohabitation and homosexuality.

“It would be a false mercy to give Holy Communion to people who do not repent of their mortal sins against Christ’s teachings on sexual purity. Real mercy consists of offering people a clean conscience via the Sacrament of Confession and thus union with God,” she said.

“Many of those who claim to speak in the name of the universal Church have failed to teach the faithful. This failure has created unprecedented difficulties for families. No responsibility is taken for this failure in this disastrous mid-way report,” she added. “The Synod’s mid-way report will increase the incidence of faithful Catholics being labelled as ‘pharisees’, simply for upholding Catholic teaching on sexual purity.”

Smeaton concluded: “We urge Catholics not to be complacent or give in to a false sense of obedience, in the face of attacks on the fundamental principles of the natural law. Catholics are morally obliged to oppose the course being taken within the Synod.”

Cardinal Luis Tagle of Manila, who praised the document’s drafters as “heroes and heroines,” emphasized at the beginning of Monday’s press conference that it is “very provisionary” and “not a final document from the Synod.” However, he noted that it would be the “basis of future discussions.”

“The drama continues,” he added, smiling.