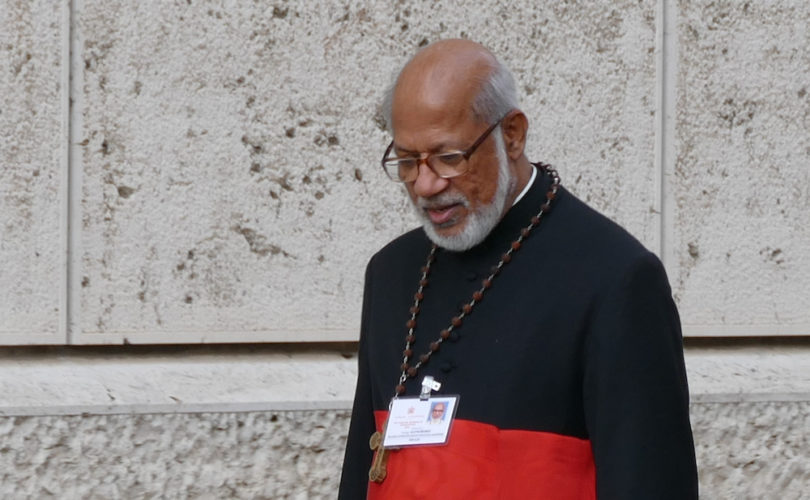 Cardinal George Alencherry, the Major Archbishop of the Syro-Malabar Catholic Church, walks into the Synod hall on October 6 before offering the morning homily.Patrick Craine / LifeSiteNews

ROME, October 6, 2015 (LifeSiteNews) – An Indian cardinal urged the fathers at the Synod on the Family on Tuesday to embrace the Church’s prophetic role to defend those who are oppressed by “individualism, hedonism, and … secularist values.”

Cardinal George Alencherry, the Major Archbishop of the Syro-Malabar Catholic Church and a cardinal since 2012, gave the homily at the opening of the day’s Synod proceedings.

Alencherry highlighted Jeremiah’s prophecy to the royal family of Judah from the day’s Mass reading that the kingdom could face ruin “if the King does not render Justice and righteousness and save the oppressed from the hand of the oppressor.”

“The words of the prophet are applicable to rulers and leaders of all the times and also to the people governed by them,” said the cardinal. “In many countries of the world people are denied of justice and righteousness by the promotion of individualism, hedonism and oppression by secularist values and lines of action.”

“The question arises whether the leaders of the Church have come forward with a prophetic role like that of Jeremiah to support the people by the Word of God and by personal witness,” he added.

Jeremiah “had to suffer at the cost of his prophetic role,” he said, adding that “the pastors of the Church in the present times are called to take upon their lives a prophetic role of suffering and kenosis, similar to that of prophet Jeremiah.”