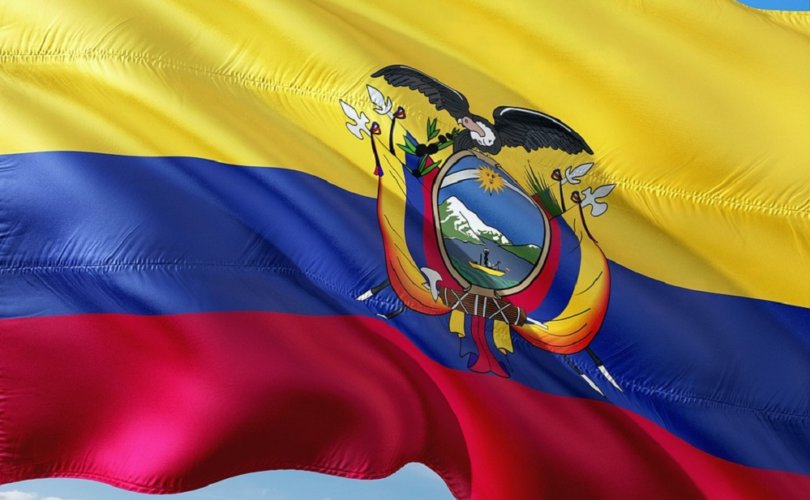 QUITO, September 18, 2019 (LifeSiteNews) — Ecuador’s National Assembly voted on Tuesday to retain protections for unborn babies, defeating legislation that would have allowed abortion in cases of rape or fetal abnormality.

The bill to decriminalize abortion died, not having reached the required 70-vote margin. Fifty-nine legislators voted against the bill, while six abstained. The bill would have amended Article 150 of Ecuador’s 2014 penal code, which establishes penalties for mothers who deliberately abort or permit another person to abort an unborn child. The code established a prison term of up to two years for those found guilty. In cases resulting in the death of the mother, the prison term rises to 16 years.

Abortion is currently allowed when the life or the health of the mother is at risk or in case of the rape of a mentally handicapped woman. In Ecuador, all sexual relations involving girls 14 and under are considered rape.

Following the vote in the National Assembly, pro-abortion advocates assailed police assembled outside the parliament. When protesters, many of whom were young women, assailed wire barriers outside the building, police responded with irritant gas. Wearing the green neckerchiefs now typical of pro-abortion forces in South America, protesters hurled insults and rocks at the police. Some threw burning torches at the parliament building. Some bore placards reading, “Girls, not mothers” and “Get your rosaries off our ovaries.”

Christians gathered outside the legislature. Some held signs reading, “Abortion: the new massacre of innocents” and “If God gives me life, why do you take it from me?” According to Reuters, Amparo Medina of Ecuador’s pro-life network said, “What the legislators have done is respect the wishes of the people,” adding, “It’s a victory for unborn children who now have the right to life.” On Monday, Catholics joined evangelical Christians in prayer to maintain restrictions on abortion.

“Please, do not commit the dreadful error of passing a law to legitimize the crime of abortion along four more lines: rape, incest, fetal defect, or non-consensual insemination. Be aware that, if it is in the womb, it is because it is alive. Don’t condemn to death the unborn,” the bishops said in a statement.

The bishops reiterated the Church’s commitment to giving aid and counsel to expectant mothers, stating that the Church wants pregnant women to know that “they are worth so much that we are fighting for their lives and the baby who lives inside them.”

The Centro de Promoción y Acción de la Mujer, a local outlet of the pro-abortion International Planned Parenthood Federation, lamented the vote, tweeting on Wednesday that the failed votes puts the lives of women in danger.

In advance of the vote, leaders of some mainline Christian denominations, including the Evangelical Lutheran Church and United Church of Christ, called on legislators to vote for the bill, arguing that abortion is not mentioned in the Bible.