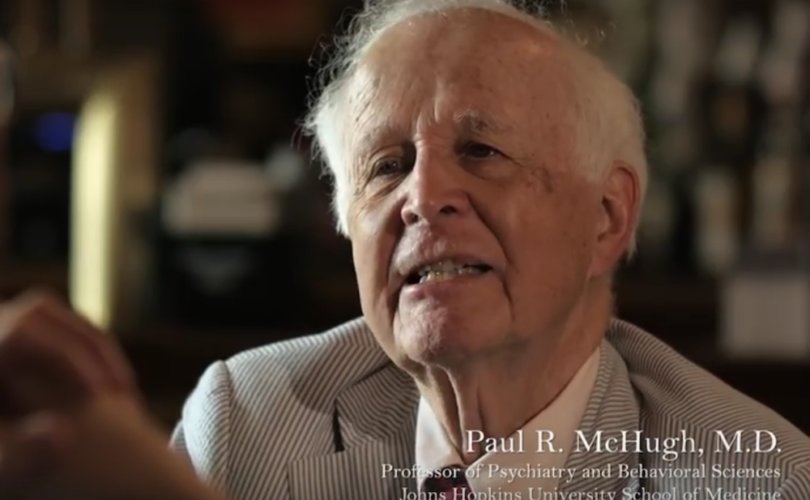 BALTIMORE, Maryland, October 12, 2016 (LifeSiteNews) — Editors of the New Atlantis, a scholarly journal “devoted to science and technology issues and their relation to social and political affairs,” are defending two authors against an onslaught of gay accusations.

A review of research studies and scientific literature on homosexuality summarized by Dr. Lawrence S. Mayer and Dr. Paul R. McHugh, entitled “Sexuality and Gender: Findings from the Biological, Psychological, and Social Sciences,” has come under vehement condemnation by the pro-homosexual advocacy group, the Human Rights Campaign (HRC).

Dr. Mayer is a scholar in residence in the Department of Psychiatry and Dr. McHugh is University distinguished professor of psychiatry at the Johns Hopkins University School of Medicine.

According to its website, the Human Rights Campaign is “the largest national lesbian, gay, bisexual, transgender and queer” (LGBTQ) gay activist organization and political lobbying group in the United States, claiming 1.5 million members and a budget of $49 million annually.

In August, the New Atlantis published Mayer and McHugh's study, which “examin(ed) research from the biological, psychological, and social sciences” and concluded that “some of the most frequently heard claims about sexuality and gender are not supported by scientific evidence.”

Merely calling into question the foundations of sexual orientation rhetoric unleashed a firestorm of condemnation from leaders in the gay community. The HRC responded to the New Atlantis by publishing a criticism of the research review, characterizing Drs. Mayer and McHugh as “Anti-Trans All-Stars,” and “anti-LGBTQ” promoters seeking to “marginalize” and mock people. They accuse the conservative authors of intentional “misleading statements” and “biased interpretations.”

On Monday, the editors of the New Atlantis responded to the gay attack by delineating where the HRC got it wrong, in a special publication entitled “Lies and Bullying from the Human Rights Campaign.”

“The Human Rights Campaign repeatedly distorts our recent New Atlantis report,” the editors wrote in the brief introduction. “Most of the HRC document is an exercise in distortion.”

The editors then tackled some of the HRC's distortion.

To the HRC accusation that the New Atlantis report “falsely implies that children are ‘encouraged to become transgender,'” the editors responded, “The report states that there is 'no evidence that all children who express gender-atypical thoughts or behavior should be encouraged to become transgender.'” Rather, the New Atlantis report cites the American Psychiatric Association’s Diagnostic and Statistical Manual of Mental Disorders, and advises physicians and family members caution in assuming that gender-non-conforming children are in fact transgender.

Ironically, the HRC accusations later include insisting — contrary to an American Psychological Association top researcher Dr. Lisa Diamond, co-editor-in-chief of the APA Handbook of Sexuality and Psychology — that “therapy can’t change sexual orientation” and gender transition for children “is a crucial step towards well-being.”

In fact, despite HRC denials that homosexual activists encourage children to become transgender, the HRC notes with favor Dr. Benard Dreyer writing in the magazine Pediatrics that “there appears to be no harm — and possible benefit — from … parent-supported early social transitions” to the opposite sex.

Explaining their report further, the New Atlantis editors state, “Here are the facts: Teenagers experiencing gender dysphoria sometimes undergo surgical procedures to alter their secondary sex characteristics. Pre-teen children experiencing gender dysphoria are sometimes given puberty-blocking hormones. And younger children are sometimes provided with psychotherapeutic 'gender-affirmative' interventions meant to encourage and support them in their cross-gender identification; medical reports and accounts in the popular press describe the use of such interventions for children five years old and younger.”

To the HRC accusation that the New Atlantis report “suggests that … [sexual orientation] can be changed,” the editors noted, “The report discusses scientific literature about the fluidity of sexual orientation. It is an incontrovertible fact that, for some people, patterns of sexual desire, attraction, and behavior do change.”

To the HRC accusation that the New Atlantis report could incite violence and “harm the health of LGBTQ communities,” the editors said in defense: “There is nothing in it that endorses or incites violence or stigmatization against anyone.”

To the HRC accusation that Dr. McHugh has “collaborat[ed] with an organization deemed a ‘hate group’ by the Southern Poverty Law Center,” the editors pointed out that the organization in question is the distinguished American College of Pediatricians (ACP) and wrote, “The Southern Poverty Law Center’s blanket denouncement of the ACP, based on a policy disagreement, is a disappointing example of extreme rhetoric used to attack those with whom they disagree.”

To the HRC accusation that the New Atlantis report offers “unscientific opinions,” the editors emphasized that Drs. Mayer and McHugh's report “cites nearly 200 peer-reviewed studies in over 300 endnotes,” and “throughout the report, Drs. Mayer and McHugh take care to describe and explain the evidence on all sides of the questions they discuss.”

After addressing these and other HRC objections, the New Atlantis editors concluded, “The public will see this assault for what it is: an obvious threat to academic freedom, and intentionally so.”

Perhaps the most disturbing facet of the HRC attack is its demand that Johns Hopkins University disavow the New Atlantis report, using as leverage the HRC's ranking as “gay-friendly” of the university's hospital and affiliated facilities in its “Healthcare Equality Index.”

To this open threat, the New Atlantis editors stated, “This blatant effort to intimidate is a disturbing strategy designed to make impossible respectful disagreement in the academy on controversial matters.  Intimidation tactics of this sort undermine the atmosphere of free and open inquiry that universities are meant to foster.”