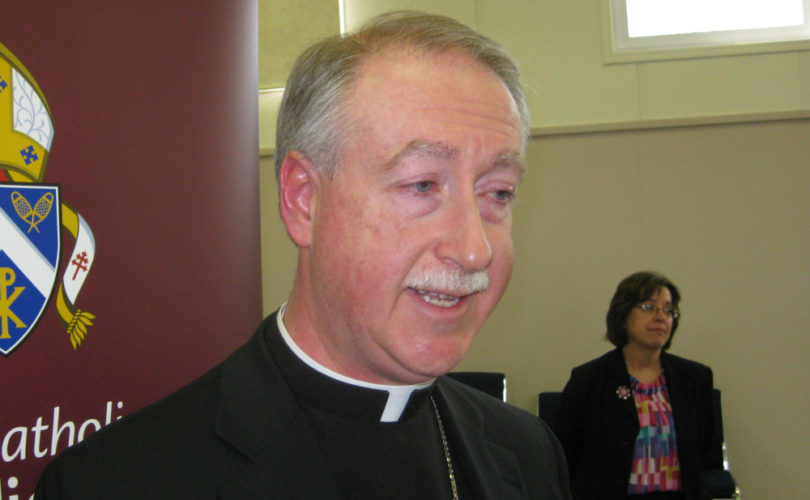 EDMONTON, Alberta, January 21, 2016 (LifeSiteNews) — Edmonton Archbishop Richard Smith has added his moral weight in denouncing the New Democrat government’s (NDP) guidelines for forming mandatory transgender policies in all schools, including Catholic ones. He also reprimanded Catholic trustees who have defended the guidelines as betraying Catholic parents who elected them.

In a statement today he called the guidelines “simply not congruent with Catholic teaching,” adding that the government enforcing them would amount to it asking the Catholic school system to “deny its faith base in its day-to-day operations and activities.”

“In a Catholic school, all curricular and extra-curricular activity is to be rooted in and consistent with the principles of Catholic doctrine.”

Archbishop Smith said that the guidelines' basic principle that self-identification is the “sole measure” of an individual’s perceived gender identity creates, what he called, an “artificial gender-neutral atmosphere in schools, often without proper regard to the rights and protections previously upheld for boys and girls and their mothers and fathers.”

The Archbishop took to task Catholic trustees in the Edmonton Catholic School board for “betray[ing]” their “duties and responsibilities” by ignoring Catholic teaching as well  as defying the position of the Catholic bishops on gender ideology.

Earlier this week some trustees from the Edmonton Catholic board as well as the board chair publicly scorned a letter issued by Calgary Bishop Fred Henry against the NDP’s transgender guidelines, telling Catholic parents that his views were “uninformed” and “not in keeping with the spirit of the Year of Mercy.” Prior to this in October, the Edmonton Board was prepared to pass a transgender policy at odds with the archdiocese’s own recommendations.

“There, for too long now, we have witnessed the inability of trustees to function in a cohesive way or speak with a unified voice. The words and actions of some trustees, rather than defending and upholding all that is good in Catholic education, have caused harm and hostility.”

“In so doing, they have betrayed the trust placed in them by Catholic electors,” he said.