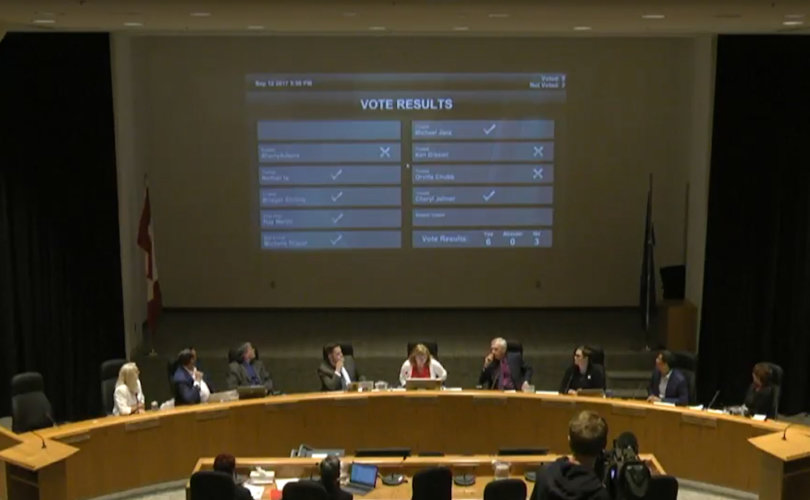 EDMONTON, Alberta, September 14, 2017 (LifeSiteNews) – A motion to establish an official policy of secrecy regarding children’s activities in Edmonton Public Schools was defeated on Tuesday at a board meeting.

Three of six trustees on the Edmonton Public School Board (EPSB) voted against a “waiver of notice of motion,” a rarely used move that needs unanimous support. It would have forced a debate and vote on the controversial motion with six days’ notice instead of the normal month notification.

The vote was part of an ongoing provincial debate over whether parents have the right to know when their child joins a gay-straight alliance (GSA), the Edmonton Journal reported.

Trustees received hundreds of emails on the issue in advance of the meeting. The debate will continue until the October 16 civic election.

Several people spoke on both sides of the issue Tuesday evening, and the informed albertan blog praised the outcome of the vote.

“Three courageous trustees stood for families and for the safety of all children by defeating the secrecy motion put forward by Trustee Bridget Stirling,” Theresa Ng wrote.

The motion also included provisions banning district staff from referring students for reparative therapy services, and holds that the board of trustees will write a welcome letter to all Edmonton Public Schools GSAs and QSAs including affirmation of its support.

It also proposes lobbying of Education Minister David Eggen to revise the School Act to explicitly ban schools from disclosing to parents when a student takes part in GSAs.

Eggen has indicated he is open to such a policy. In April, he sent a letter to all Alberta school boards forbidding them from informing parents when their children join GSAs.

Ng says Alberta law specifies that parents have a legal right to know what is happening during the school day, including their child’s participation in extracurricular activities, but does not state anything about this information being contingent on a child’s permission.

Stirling’s motion also fails to take into account the different developmental needs that students may have based on age, maturity and other factors, Ng said.

And she points out how the GSA Network collects personal information from K-12 children without parental or teacher knowledge or oversight, which flies in the face of protecting the privacy of children.

Further, she said, a child’s participation in a gay-straight alliance could be due to their desire to support others, so no assumption could be made on participation alone that the child is identifying as gay.

“It is deeply troubling that a school trustee, entrusted with the safety of almost 100,000 children in Edmonton, would propose a motion that so blatantly defies law, logic, developmental age-appropriateness and safety risks,” Ng wrote. “But even more troubling is the hasty timeline Stirling is attempting to impose in order to limit debate on this important topic.”

Ng was among those urging parents and other concerned Edmonton citizens to contact trustees. She encouraged people to thank those who voted against the waiver, as well as to become informed and involved in the upcoming election in Edmonton’s Ward G.

Stirling, who has pushed for more “comprehensive” sex education in Edmonton schools, indicated after her motion failed that she was undeterred in advancing the policy keeping information on student activities from parents with children in Edmonton Public Schools.

“Sometimes you have a really hard day, but you know you did the right thing,” Stirling tweeted. “Notice of motion for Oct 24, 1st mtg of new board. I'll be back.”