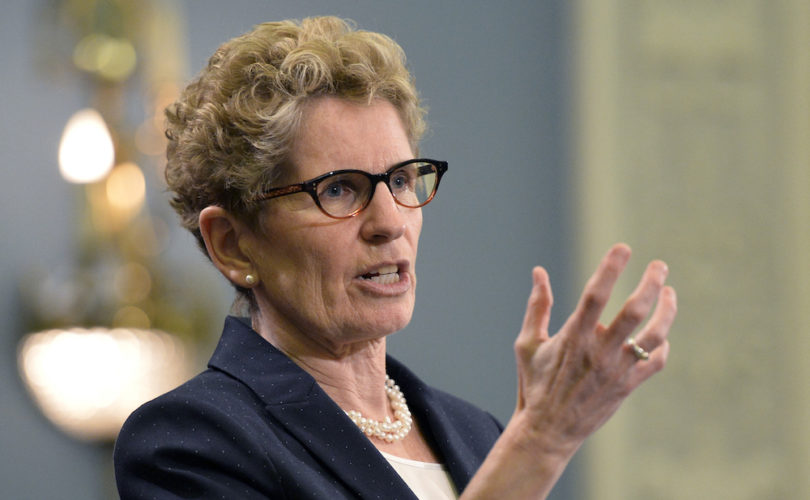 TORONTO, May 26, 2016 (LifeSiteNews) — A Catholic school board in Ontario voted 4-3 last week after a heated debate against amending policy that would grant school administration powers to suspend or expel students who engage in “unacceptable” behaviors of “homophobia…and harassment on the basis of sex, gender, gender identity, sexual orientation.” The province's education minister has now taken the board to task for failing to pass the amendment, stating that since the province has “strengthened the requirements” for school boards regarding inclusivity and diversity, she will personally contact the board to “discuss this matter.”

The Halton Catholic District School Board’s Code of Conduct policy has been amended four times in the past six years as the Liberal government presses its “inclusivity” agenda. Amended in January last year, the policy includes the following “standards of behavior” for students regarding gender identity, gender expression, and sexual orientation:

A new section inserted into the proposed amendment states:

To meet the goals of creating a safe, caring, and accepting school environment, the Halton Catholic District School Board supports the use of positive practices as well as consequences for inappropriate behavior, including progressive discipline, which includes suspension and expulsion where necessary. The board considers homophobia, gender based violence, and harassment on the basis of sex, gender, gender identity, sexual orientation…unacceptable and supports the use of positive practices to prevent such behavior and authorizes principals, or their delegates, to impose consequences in appropriate circumstances, up to and including a referral to the Discipline Committee of the Board for expulsion from all schools.

Education Minister Liz Sandals told the Toronto Star that she will investigate why the amendment failed since “gender identity and gender expression are now included as prohibited grounds of discrimination under the Ontario Human Rights Code.”

LifeSiteNews contacted Sandals and asked if Catholic schools will be required to discipline students with suspension or expulsion who tell other students — based on what the Bible or the Catechism of the Catholic Church says — that homosexual activity is wrong, but did not receive a response by press time.

Oakville Trustee Anthony Quinn told LifeSiteNews that he voted against the amendment precisely over such concerns, stating that the current policy was “satisfactory to the majority of board members and protected all students in a very broad and inclusive manner, including the specific references to gender identity, gender expression and sexual orientation.”

“I raised a concern [prior to the vote] with the language of the revisions which, as I read them, could lead to a situation in which; if a student or group of students were to cause another student or group of students to feel unsafe or unaccepted in the school environment, by publicly stating the teachings of the Catholic Church (found in the Catechism of the Catholic Church, or the teaching of the recent Popes, including Francis, Benedict and John Paul II) that could possibly lead to the student(s) reciting Catholic teaching being subject to discipline under the revised policy, as it was written in the revised version.”

Quinn said that after the vote, trustee Paul Marai, who is also the Policy Committee Chair, tweeted with the homosexual news service DailyXtra and the homosexual activist organization Egale Canada that the “board had ‘defeated’ the discipline policy working against the protection of students in our school, which was clearly not the case.”

Quinn also took issue with Board Chair Jane Michael for raising the issue with media such as The Star and DailyXtra about the outcome of the vote and “accusing fellow Trustees of dragging our feet in the rubber stamping of third party directives.”

Trustees Susan Trites, Helena Karabela, and Anthony Danko also voted against the amendments. LifeSiteNews contacted them for comment, but only trustee Karabela responded by respectfully declining.

Tanya Granic Allen of Parents As First Educators criticized the amendment as “unnecessary and out of place.”

“Catholic Schools are in the unique position in that they have the Catechism of the Catholic Church which teaches dignity and respect for all persons. There is no need to qualify that further. No need for policy amendments. All humans are deserving of love and respect. Full stop,” she told LifeSiteNews.

She also voiced concern that the amendment could be “quite dangerous” for Catholic students who simply want to express the Catholic faith to other students.

“Pope Francis has repeatedly warned of the dangers of gender ideology. This amendment could be quite dangerous in that students could be disciplined for simply expressing Catholic teaching, for example, if a student were to state the Catechism’s teaching that homosexual attraction is intrinsically disordered.”

“The Halton Catholic School Board should not amend its policies and in turn spark opposition to Church teaching, regardless of what the government is dictating. Catholics in Ontario have a constitutional right to teach their faith, through the Catholic School system. The government cannot override that,” she added.

The proposed amendments will now return to the policy committee, which has a meeting scheduled next month.