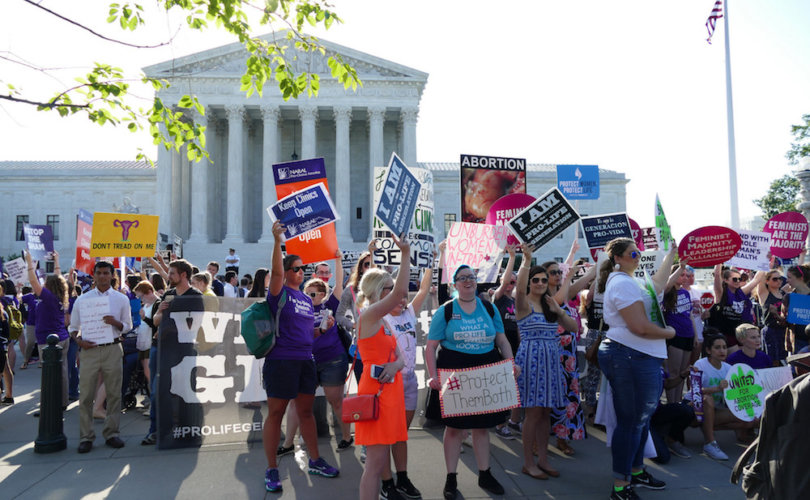 At 10 a.m., justices announced they had voted to overturn the Fifth Circuit Court of Appeals' decision in Whole Woman’s Health v. Hellerstedt. By a 5-3 margin, the court's eight justices invalidated two provisions of Texas H.B. 2, which mandates that abortionists have admitting privileges at nearby hospitals and operate in offices that more readily allow emergency personnel to rescue women injured by botched abortions.

“With the drop of a gavel, five Supreme Court justices have endangered the safety of women who may seek an abortion and have ensured that more innocent, unborn lives will be lost in the process,” said Congressman Diane Black, a Tennessee Republican who chairs the House Select Panel on Infant Lives. “As a registered nurse, I know that there is ultimately no such thing as a safe abortion, but these modest standards work to reduce the risks of this already emotionally damaging procedure.”

Texas Attorney General Ken Paxton said he had no regrets over pursuing the case all the way to the Supreme Court.

“We did what we needed to do to protect life in this case, to protect women's health. I don't think our state is ever going to apologize for trying to accomplish those goals,” Paxton said on a conference call with LifeSiteNews this afternoon.

He emphasized that the law had the overwhelming support of “an elective body” that represents the people of Texas. “They have every right, and they have a legitimate interest” in protecting women from harmful abortion practices, Attorney General Paxton said.

“Eight unelected justices sitting 1,500 miles away should not have the constitutional authority to second guess the policy choices of the women of Texas,” agreed Concerned Women for America President Penny Nance in a statement.

National pro-life leaders wondered why abortionists had chosen to close their facilities rather than meet health standards intended to protect the women they hurt.

“How shabby are these abortion clinics that they cannot meet the minimum standards other outpatient surgical centers are required to meet, and just how bad are these abortionists that they can't get admitting privileges at a local hospital?” said Carol Tobias, president of the National Right to Life Committee. “As we saw with Kermit Gosnell in Philadelphia, it's clear that the lucrative abortion industry is not able or willing to police itself and allows filthy, deplorable conditions to go unchecked.”

Family Research Council President Tony Perkins said, “The Supreme Court's decision to strike down H.B. 2 undermines the health and safety of vulnerable women. This decision is a loss for women and gives the abortion industry a free pass.”

“Mandating basic and necessary health and safety standards such as trained staff, corridors that could accommodate a stretcher in case of emergency, admitting privileges to a hospital, and up-to-date fire, sanitation, and safety codes should be beyond the politics of abortion,” he said. “In 2011 alone, 26,500 women experienced abortion-related complications, and close to 3,200 women required post-abortion hospitalization.”

An average of 500 Texas women are rushed to the emergency room due to botched abortions each year, and 200 are hospitalized, according to the Texas-based Justice Foundation.

“In striking down these commonsense requirements, the Supreme Court has essentially accepted the abortion industry’s argument that it should be allowed to keep its profits high and patient care standards low,” said Clarke Forsythe, the acting president of Americans United for Life.

Often, it is those on the Left who believe in greater government regulations, especially on the grounds of protecting consumers and patients.

“They expect us to believe their opinion is based on the Constitution? It certainly is not,” said Mat Staver, president of Liberty Counsel.

Nance added that “the justices created and self-defined this extra-constitutional 'undue burden' to advance their political ideology and, in doing so, just five justices are able to halt the efforts of a whole state to protect its citizens.”

“The justices who have chosen to strike down Texas’s law reveal their extreme pro-abortion bias, going so far as to reject the established authority of states to enact laws to ensure the safety of their own citizens,” said Lila Rose, the founder of Live Action, which has spent years documenting the shady and sometimes illegal practices of the abortion industry.

“It is the within the rights of the states, indeed, it is the duties of the states, to protect its citizens from predatory businesses, which is exactly what the abortion industry is,” said Kristan Hawkins, president of Students for Life of America, the nation's largest pro-life youth organization. Abortionists “prey on the vulnerabilities of women who are in desperate situations, placing their bottom line over the health and safety of the patients.”

“We find it bizarre that the question of high safety standards for facilities and doctors is even up for debate, especially by those who claim to have women’s health and rights as their top priority. This is precisely the area in which people of good will should be able to agree,” the group said in a statement.

Texas is not throwing in the towel

Leaders in the Lone Star State say they will move forward with additional laws, which will be found constitutional.

“Our work to protect mothers and unborn babies from abortion will continue,” said Joe Pojman, Ph.D., executive director of the Texas Alliance for Life. “We will scrutinize this decision, hostile as it is to reasonable safety regulations, to find ways to increase abortion facility safety regulations as much as possible.”

This morning's ruling sent shock waves across the nation, provoking pro-life organizations in other states to condemn the 5-3 decision, written by Justice Stephen Breyer.

Indiana Right to Life's president and CEO, Mike Fichter, said that justices “showed an utter disregard for women's health and safety through today's ruling.” The fact that the lawsuit was filed proves that “the abortion industry will fight any regulation that they feel threatens their ability to profit off women in crisis situations,” he said.

Fichter said that he will monitor how today's decision affects a local Indiana ordinance requiring admitting privileges, which was geared to deal with Dr. Ulrich “George” Klopfer, who did not report multiple cases of statutory rape in accordance with state law.

“For decades abortion facilities have been operating substandard with no legal consequences, unlike all other medical facilities,” said Paula Westwood, the executive director of Right to Life of Greater Cincinnati. “The Supreme Court has ensured that women seeking abortion will not at least receive commonsense health and safety standards for care, and we can expect more botched procedures and tragedies.”

Fighting for the Supreme Court

The ruling would likely have been 5-4, had Justice Antonin Scalia not died unexpectedly last year in Texas. The next president is expected to fill at least one vacancy on the court, and perhaps several.

Mike Gonidakis, the president of Ohio Right to Life, sounded a common theme of many pro-life organizations: the importance of changing the composition of the Supreme Court. “With the tragic passing of Justice Antonin Scalia, today’s decision underlines the grave importance of just one Supreme Court appointment and possibly three appointments that will be left to the next president of the United States.”

“This profoundly disappointing and cruel decision reinforces why the pro-life movement is more important than ever, and why the stakes are so high this November,” said Congresswoman Black. “We must now work to overturn this decision at the federal level and restore a culture where every child is welcomed in life and protected in law.”

Rep. Chris Smith, R-NJ, the chairman of the Bipartisan Congressional Pro-Life Caucus, said that “43 years ago the Supreme Court stripped away protection for unborn children and their mothers. Restoring that protection requires a Court that acknowledges the right of states to protect women’s health and the unborn.”

National polls that show greater support for pro-life restrictions may portend a societal evolution on the issue, one pro-life leader said.

“As more and more Americans recognize the humanity of the child in the womb, the abortion lobby’s victory will be short lived,” Lila Rose said.