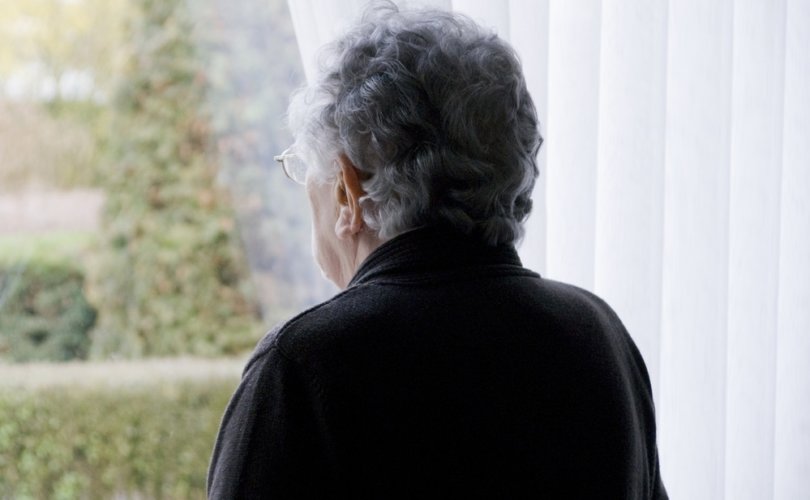 KELOWNA, British Columbia, August 19, 2020 (LifeSiteNews) — A 78-year-old woman is asking her family to arrange for her to be euthanized after being confined for months in her room in a British Columbia long-term care home under provincial COVID-19 restrictions.

Shirley Turton is depressed, has lost interest in eating, can’t put a glass of water to her lips, and is lonely, her daughter Jennifer Molgat told the Kelowna-based iNFONews.

“Please God, help us, those of us who can’t help ourselves,” says Turton faintly in a video recorded by her daughter that accompanies the story.

“All that I want is to be out in the sunshine with my family.”

Turton has said that “if things can change she does not want to die,” Molgat told Rob Munro of iNFONews.

“It was so amazing because we would look at this woman, disabled in her wheelchair, and here she was so confident about her life. But that’s gone now. That has been snuffed. She’s lost all hope. She’s going downhill.”

Molgat did not publicly identify the long-term care home but said that before it locked down in March, the family had a personal care attendant take their mother out on various errands three times a week.

Her children also visited her regularly and took her out to Molgat’s farm or the beach, where she could visit with her grandchildren, iNFONews reported.

Turton’s family waited years for a room to become available in the facility, which Turton regards as her home and which she does not want to leave.

With the lockdown, however, because she is in a wheelchair, Turton cannot visit other residents, and she is not permitted out, according to Molgat.

Family visits were also restricted, and Molgat described these as taking place looking through a window or the wrought iron fence, where conversation was next to impossible because Turton was 20 feet away.

“It’s cruel, in a way, these visits, because they’re so hard on her,” Molgat said. “I think a lot of seniors in long term care are in the same boat. … These visits are not appropriate or helpful.”

However, Turton’s condition has deteriorated so much that Molgat is also allowed to visit, but only in the morning every other day, which is difficult because she works full time, she told iNFONews.

She wants the care home to be more flexible in allowing visits and, most importantly, to let her take her mother out, but she has not been able to get permission to do this.

“It’s just crazy to me, and I can’t see how it’s even legal that they’re able to keep these people trapped in their homes,” Molgat said.

LifeSiteNews called Dr. Henry’s office and was told that “a lot” of family members of long-term care residents have been “calling in with concerns about the restrictions, and how they’re affecting parents in care.”

When asked what the province is doing to alleviate the mental distress of long-term care home residents, a spokesperson for NDP health minister Adrian Dix said social and family visits have been allowed since July 13 and referred to the current guidelines.

“Throughout this pandemic, the Province has sought to continually improve long-term care and seniors’ assisted living operations, to make them safer for residents and those who care for them,” wrote Stephen May in an email.

“People must continue to be completely committed to combating this virus for these historic investments to be effective.”

A spokesperson for Henry referred to this email as answering for the chief medical officer as well.

Alex Schadenberg of the Euthanasia Prevention Coaltion told LifeSiteNews he has received “phone calls from people in similar situations” and questioned how many people are suffering the same fate as Turton and her family.

“You have this isolation imposed on people who are now experiencing the depths of despair,” he said.

“What we do see is the number of suicide deaths has increased, so I’m assuming that in the same way, people seeking assisted death, feeling their life has no purpose or value because of being isolated due to covid, has also increased,” added Schadenberg.

He said there is a need for protection, but “the question becomes, at what point have we gone too far?”

Schadenberg also pointed out there’s no guarantee that euthanasia requests made in these circumstances will be denied on the grounds that the current law says a person’s natural death must be reasonably foreseeable to be eligible for lethal injection.

“The law doesn’t say that you have to be actually dying,” he said.

News of Turton’s plight comes as the U.S. Centers for Disease Control (CDC) released the results of its June 24 to 30 survey in which more than one out of ten of the respondents reported they had “seriously considered suicide in past 30 days.”

That’s more than double the percentage of American adults who said in a 2018 Department of Health and Human Services survey that they had thought about suicide in the past 12 months, according to the Western Journal.

“Approximately twice as many respondents reported serious consideration of suicide in the previous 30 days than did adults in the United States in 2018, referring to the previous 12 months (10.7% versus 4.3%),” the CDC said.

The CDC report, based on a web-based survey of 5,412 adult Americans on “Mental Health, Substance Use, and Suicidal Ideation During the COVID-19 Pandemic,” found that certain populations were hit harder by the crisis.

Of respondents who said they had “seriously considered suicide” in the last 30 days:

Four out of ten respondents also reported “adverse mental health” because of the crisis.

“Overall, 40.9% of respondents reported at least one adverse mental or behavioral health condition, including symptoms of anxiety disorder or depressive disorder (30.9%), symptoms of a trauma- and stressor-related disorder (TSRD) related to the pandemic (26.3%), and having started or increased substance use to cope with stress or emotions related to COVID-19 (13.3%),” the CDC report stated.

Conservative entrepreneur and columnist Phil Kerpen tweeted the survey results and blasted the lockdowns as “unconscionable.” He pointed to a video of CDC director Robert Redfield stating in July that had been far more suicides than virus-related deaths among young people:

How many young people will die as a consequence of old people selfishly locking them down?https://t.co/YMrP02buOY